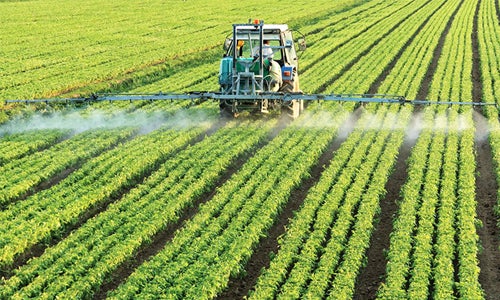 As the active ingredient in Monsanto‘s branded Roundup weed killer, along with hundreds of other weed-killing products, the chemical called glyphosate spells billions of dollars in sales for Monsanto and other companies each year as farmers around the world use it in their fields and orchards.

Ubiquitous in food production, glyphosate is used not just with row crops like corn, soybeans and wheat but also a range of fruits, nuts and veggies. Even spinach growers use glyphosate. Glyphosate is used not just with row crops like corn, soybeans and wheat but also a range of fruits, nuts and veggies. Photo credit: Shutterstock

Though considered for years as among the safest of agrichemicals, concerns about glyphosate have been growing after the World Health Organization’s cancer experts last year classified it as a probable human carcinogen, based on a series of scientific studies.

There are other concerns as well—mounting weed resistance to glyphosate, negative impacts on soil health and a demise in the monarch butterfly population tied to glyphosate use on forage that young monarchs feed on. The U.S. Environmental Protection Agency (EPA) is currently finishing a risk assessment for glyphosate that examines the range of issues.

The EPA is still trying to determine just how worrisome glyphosate is or isn’t. In the meantime, it’s worth a look at how widespread the use of glyphosate is in our food supply. A document released by the EPA on April 29 gives us a peek.

In a memorandum dated Oct. 22, 2015, the EPA analysts reported an “updated Screening Level Usage Analysis” for glyphosate use on food items. That memo updates estimates of glyphosate use on crops in top agricultural states and provides annual average use estimates for the decade 2004-2013.

Seventy crops are on the EPA list, ranging alphabetically from alfalfa and almonds to watermelons and wheat. And, when compared to a prior analysis that ran through 2011, it shows that glyphosate use has been growing in production of most of the key food crops on the list.

You can check out your own favorite food here and compare it to the prior analysis here. Some on the list may surprise you, including cherries, avocados, apples, lemons, grapefruit, peanuts, pecans and walnuts.

The growing use of glyphosate on food crops has prompted calls for regulators to start testing levels of such residues on food to determine if they are within levels regulators deem safe. They’ve been doing such testing for years for residues of other agrichemicals. The U.S. Food and Drug Administration said in February it would start doing that type of testing for glyphosate residues this year on a limited basis.

In the meantime, the EPA, which sets the “tolerance” levels that deem what is safe regarding pesticide residue, announced May 3 that it was finalizing a new rule that will expand the numbers of crops that can have tolerances established. The EPA said this will “allow minor use growers a wider choice of pest control tools including lower-risk pesticides, to be used on minor crops, both domestically and in countries that import food to the United States.”