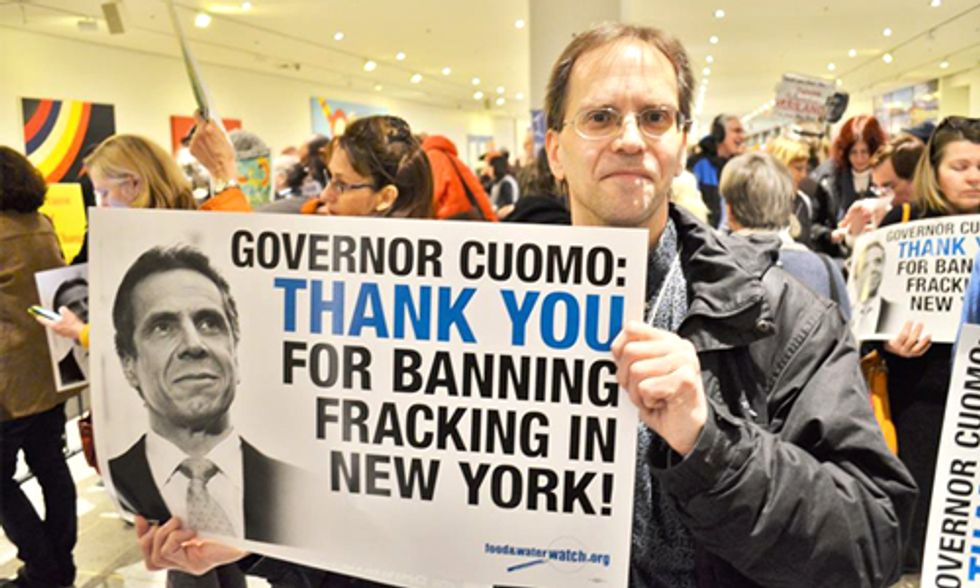 [Editor’s note: A thousand anti-fracking activists rallied outside of Governor Cuomo’s State of the State address in Albany yesterday to celebrate the statewide ban on fracking, thank Governor Cuomo, and begin the work of fighting fracking infrastructure projects and promoting renewable energy. Here below are the prepared remarks from Sandra Steingraber’s speech at the post-rally victory party in the nearby Hilton Hotel.]

My friends, we are unfractured.

And thereby hangs a tale.

It’s a tale in which we all are—each one of us is—a starring character and a co-author. We are the maker of this story that has been shaped by our unceasing, unrelenting efforts—all of which mattered and made a difference.

Thank you. Thank you for providing the surprise plot twist to our story. Thank you for revealing yourself, in the final chapter—and, God, what a page-turner that was—as our protagonist. Photo credit: David Braun

Every phone call. Every media story. Every press conference. Every petition signature. Every chant. Every sign and banner. Every birddogging mission.

And every alarm clock that rang at 3:30 a.m. to take every person to every bus to Albany every time we came here for the past five years.

Because that’s what truth does. And it is so sweet now to come together in one room to tell the story of our victory over the shale gas army to each other. That’s why we are here today.

Because each one of us played a different role in this epic movement, we all have different points of view.

Here’s how the story goes from my vantage point.

It was science that stopped fracking in New York. In 2008 when our moratorium was first declared, the state of knowledge about the risks and harms of fracking was rudimentary. The science on fracking was a vast pool of ignorance and unknowing; on the far banks of that pool were what looked to be faint signals of harm.

As the years went by, those signals grew stronger. By 2012, when the revised draft Supplemental Generic Environmental Impact Statement (sGEIS) was released, there were about 60 studies in the peer-reviewed literature.

But exponential growth is an amazing phenomenon.

Two years later, when the NYS Department of Health released its final public health review of fracking, the number of studies in the peer-reviewed scientific literature had exceeded 400. All together, these studies show that fracking poisons the air (especially with benzene) and contaminates water. They show that old wells leak. They show that new wells leak. They show that cement is not an immortal substance and cannot always create, for all time, a perfect gasket that seals off the fracked zone from everything above it.

The studies show that methane leaks from drilling and fracking operations in prodigious amounts and so poses serious threats to our climate. And they show evidence for possible health impacts, including to pregnant women and infants.

Those initial faint glimmers of danger turned into the warning beacon of a lighthouse.

The conclusions reached by the New York State Department of Health—that fracking has not been demonstrated to be safe as currently practiced and that there is no guarantee that any regulatory framework can make it safe—are echoed in literature reviews conducted by three other scientific shops. These include a compendium of findings compiled by my own group, Concerned Health Professionals of New York, a statistical analysis by Physicians, Scientists and Engineers for Health Energy, and a major report from Canadian province of Quebec.

Four independent teams of public health scientists looked at the data and came to the same conclusion: Fracking carries known and unknown risks of harm for public health and the environment upon which public health depends.

But, let’s be clear. Science alone did not stop fracking. The data received a big assist from a well-informed citizen movement that took the scientific evidence to the media, to the Department of Environmental Conservation, and to elected officials, including the Governor himself.

It was the people who spoke scientific truth to power.

You all accomplished that in two ways.

First, you issued invitations to scientists to come into your communities—into your church basements, town halls, middle school gymnasiums, chambers of commerce, and Rotary Clubs. Thus, for a couple years running, some of us PhDs and MDs spent a lot of Friday nights and Sunday afternoons in one small town or another in upstate New York, giving Powerpoint presentations and laying out the data for audiences of common folks and town board members.

The second way science was disseminated to and by the people was through the public comment process. Do you recall the 30 Days of Fracking Regs? Remember those days? A few of us laid out the science like a trail of breadcrumbs, and you all followed. In these and other ways, we sent 204,000 well-informed, scientifically grounded comments to Albany. They spoke very loudly.

Science alone is just a lot of black dots on white mathematical space. Like a musical score that sits on a shelf, it doesn’t become a song until someone picks up the score and sings it. And you sang it! You informed your friends and neighbors about the science and so pushed the needle on public opinion. You changed providence itself.

But even a grand citizen chorus, informed and aroused by science, was not sufficient to ban fracking. There was a third element: a governor with the willingness to listen to the science and with the courage to stand up to the oil and gas industry at a time when other political leaders seem to be following a policy of capitulation and appeasement.

It required a governor with vision, a governor who could imagine a New York economy untethered to the latest inane idea for blasting more fossils out of the ground and lighting them on fire.

Governor Cuomo, I have never met you. But, over the past five years—other than my husband—you are the man I’ve paid the most attention to.

Thank you. Thank you for providing the surprise plot twist to our story. Thank you for revealing yourself, in the final chapter—and, God, what a page-turner that was—as our protagonist.

Of course, this story of ours is not done. I myself am leaving in a few minutes to drive to the courthouse in the Town of Reading, New York, along the banks of Seneca Lake where forty defendants are being arraigned tonight as part of an ongoing civil disobedience campaign to stop Seneca Lake from becoming a gas station for fracking.

This dastardly plan involves repurposing old, crumbly salt caverns underneath the shoreline to serve as storage vessels for vast quantities of methane, butane, and propane. From the Seneca Lake salt caves, the fracked gases will be pushed into pipelines—including, perhaps, the one that you are fighting—and propelled along by compressor stations.

Including, perhaps, the one that you are fighting.

The gas in the Seneca Lake salt caverns is not for us. The terminus of the pipeline is hundreds of miles away, and, Crestwood Midstream—the Texas-based company behind all this—makes clear to its investors that it intends to turn the Finger Lakes into the gas storage hub for the entire Northeast.

Our next battle is fracking infrastructure—from Seneca Lake to Port Ambrose, from the Constitution pipeline to the Dominion New Market Project, and from drill cuttings to liquid waste dumping.

As we go after these various proposals and projects, our work now diversifies and become more diffuse. But, happily, our skill set has also diversified. We’ve learned a lot over the past five years, we are battle tested, and we have wind in our wings.

Against fracking infrastructure, we will prevail. I am playing to win.

As we enter the next phase of our struggle, lets be really honest and not mythologize what have accomplished already. The whole world is watching us now and wants to know our secrets. Let’s not be exceptional. Let’s not say that New York’s anti-fracking activists were fearless and tireless.

In truth, we were scared and exhausted much of the time.

Our secret was that we just kept going anyway. We learned how to stick together and listen to each other. And that’s what we are going to continue to do as we throw ourselves into fracking infrastructure projects.

My friends, I’m headed to the courthouse now to stand with the Seneca Lake Defenders. It’s a tough fight, but I go with this knowledge:

The state of our bedrock is unshattered, and the state of New Yorkers is, now and forever, unfractured.