How to Talk About Climate Change on Thanksgiving 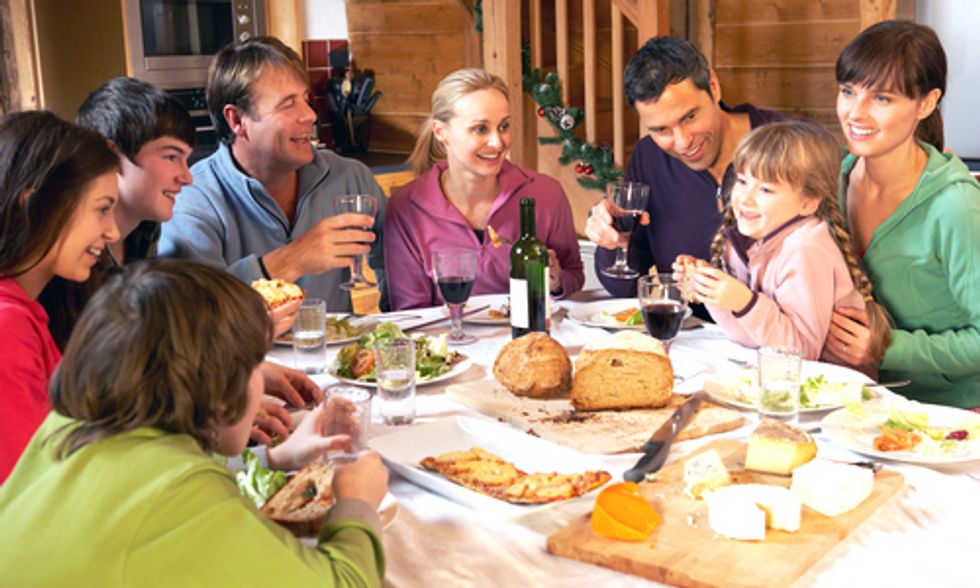 My mother’s family is politically diverse. And opinionated. As my grandmother tells it, the last time she and my grandfather voted for the same president was Eisenhower. Like a lot of families, our discussions around the holidays can veer into national issues and politics. Sometimes those discussions are enlightening, but they can also devolve into arguments.

Will you talk about climate change during this Thanksgiving holiday?
Photo credit: Shutterstock

I know many families ban political discussions around the dinner table. While that’s not how I grew up, I understand why people want to avoid raised voices and hurt feelings, especially while they’re digging into stuffing. Unfortunately, many people would consider a discussion about climate change political, too. That sentiment can create a spiral of silence, according to George Marshall, who wrote a masterful guide to how we talk about climate change.

So if you care about climate issues, should you march into Thanksgiving dinner with some graphs, charts and talking points? I sure hope not. For one thing, those aren’t edible (except pie charts, which are delicious). But even if you’re not trying to talk about climate change, it can and does come up.

It’s easy to have a normal, friendly conversation about climate issues with most people. But if you have a friend or relative who has very strong opinions about climate science or policy, the discussion can get more heated than the atmosphere. In those cases, you should think a little differently about how you approach the conversation.

Course One: serve up questions, not arguments

If someone tells you the Earth isn’t really warming, it’s an invitation to argue about temperature data and scientific authority. Further, some folks who don’t accept the science can raise a surprisingly large number of misleading points because there’s so much misinformation out there from which to draw.

Instead of having an argument, ask them where they read or heard a given point. Tell them you heard something different somewhere else. Don’t be defensive or aggressive about it. This isn’t about proving you’re right. It’s about sharing perspectives. Keep asking questions. You’ll probably find that someone’s skepticism toward climate science stems from a negative attitude about climate policy and politics rather than substantive objections to the science.

Similarly, a lot of people who accept the science are depressed about our prospects for dealing with climate change. They might feel like we’re already doomed, when, in fact, climate science presents us with a range of risks. It’s worth looking at what those risks —and our climate choices—really look like. The National Climate Assessment is the richest and most accessible resource on this topic for the U.S.

In his forthcoming book from Stanford University Press, How Culture Shapes the Climate Debate, the University of Michigan’s Andrew Hoffman argues that we can easily get caught up in the culture war when we talk about climate change. “Certainly, Al Gore and Rush Limbaugh evoke visceral responses from individuals on either side of the political divide while also resonating strongly with those who agree with their ideology,” Hoffman writes. “But individuals with credibility on both sides of the debate can act as ‘climate brokers.’”

Hoffman recommends pointing to people who share an audience’s values when it comes to climate and energy issues.

For instance, some people are uncomfortable with climate change because it feels like it’s in conflict with their religious views. You can point them to researchers like Katharine Hayhoe and religious leaders like Richard Cizik.

If someone’s objections are rooted in conservative politics, it’s worth learning about Bob Inglis and the R Street Institute. They have sensible ideas for addressing climate change based on conservative values and they have good-faith criticisms of liberal policies, too.

If you have a friend or relative who thinks addressing climate change will harm the economy, look to CERES and CDP, two groups that illuminate the business case for responding to climate change. Broad coalitions of businesses accept climate science, too.

These people and groups are also useful to highlight for people who are despondent about climate change. Efforts to respond to climate risks are bigger and more diverse than most people know; that should give us hope.

Course Three: clear the table and bring the solutions

After you’ve tried the steps above, a discussion might still devolve into an argument. The good news is, you can always talk about solutions.

Indeed, even people who think climate change is a scientific conspiracy are interested in saving money on their electricity bills and visiting the gas station less often. Generally, Americans are in stronger agreement with one another about national and personal energy choices than they are about climate science. Spending more time focusing on what we agree on can be incredibly productive.

Some people who work in climate communication are uncomfortable with the idea of skipping over the science, but it can absolutely be the right approach for some audiences. If you face a choice between having a fifteen minute argument about the polar vortex or packing a few folks in Uncle Bob’s Chevy Volt for a test drive, the choice should be clear.

Persuasion doesn’t happen right away. Sometimes the most you can do is encourage someone to be a little more open minded. After a conversation, you can follow up with an email or a Facebook message pointing to whatever (or whoever) you talked about earlier. Maybe your friend or relative will be singing a slightly different tune next time you see them.

Regardless, at some point, you’ll want to stop talking about climate change. National political figures and interest groups have done a lot to polarize these conversations and pushing too hard can polarize someone’s views even more. More importantly, you don’t want a discussion about climate change to distract from your valuable family time, or delicious, delicious pie.

Have you had difficult conversations about climate change with a friend or relative? Did climate change come up at your family dinner? Let us know how it went below.