How to Tackle Climate Change Head On 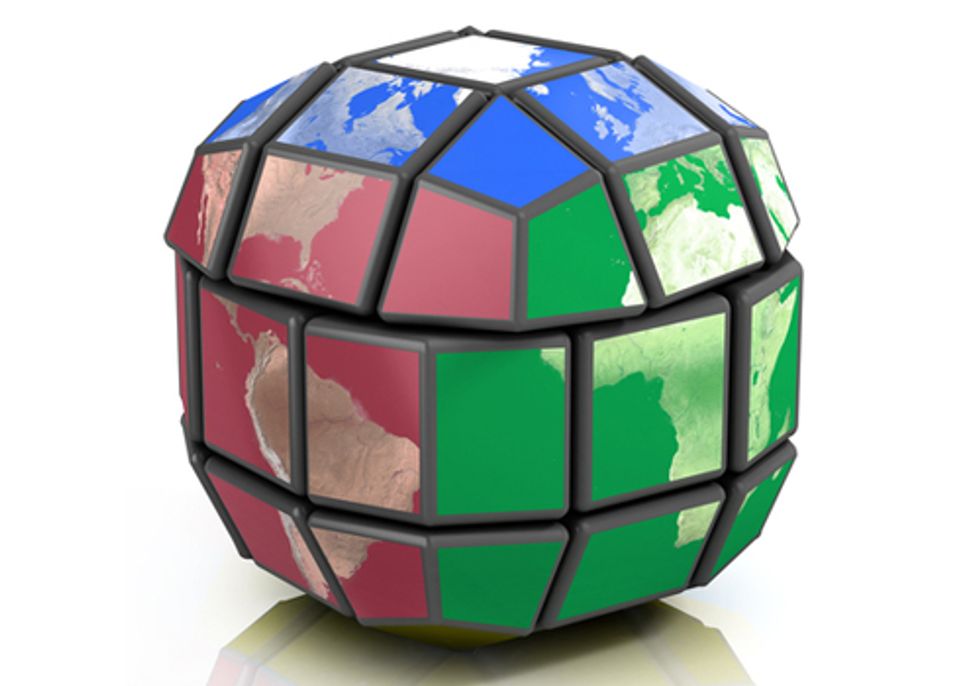 Largely due to destruction caused by recent climate-related extreme weather events in the U.S., there is a new urgency in our nation to adopt additional carbon pollution reduction measures. In 2011 and 2012, 21 such events each caused $1 billion or more in damages. This new evidence demonstrates that our climate change problem is much more imminent and severe than previously thought. Instead of idly waiting for the next devastating storm, flood, drought or heat wave to hit, we should tackle climate change head on by further reducing our carbon pollution.

The World Bank, International Energy Agency and U.N. Environment Programme have all issued reports since the presidential election last month predicting a steep escalation in carbon pollution in the atmosphere over the coming decades. These warnings heighten the necessity of reducing carbon and the other pollutants responsible for climate change. If we don’t take action now, we will inevitably face more devastating changes to our weather, water, land, air and food supply. We must reduce carbon pollution from power plants to help fight climate change and its associated destructive extreme weather, as well as other serious public health impacts such as respiratory deaths and illnesses caused by more smog and the onset of tropical diseases.

The Obama administration has proposed—and should promptly finalize—a carbon pollution standard for new power plants. Additionally, it should develop, propose and promulgate a standard for existing power plants, as they are the single largest unregulated carbon pollution source, comprising 40 percent of total U.S. emissions. The Clean Air Act provides the executive authority to require such emission reductions without congressional action, which would likely be delayed or blocked considering that many congressional Republican leaders adamantly deny the existence of human-induced climate change.

What follows is an introduction to cleaning up carbon pollution using existing executive authority.

U.S. carbon pollution projected to rise over next 30 years

In 1970 Congress passed and President Richard Nixon signed the Clean Air Act, a pollution-control regime that still exists today. The act developed a flexible regulatory system to limit pollutants from stationary and mobile sources. Twenty years later Congress passed the Clean Air Act Amendments of 1990, which increased the U.S. Environmental Protection Agency (EPA)’s authority to reduce the pollution responsible for acid rain, airborne toxics, hazardous pollutants, ozone-depleting chemicals and more smog-forming pollutants. Though it has been a long time—22 years—since the Clean Air Act was updated, it is still an effective and flexible tool for responding to new and ongoing scientific and public health challenges. It also produces a huge net economic benefit by reducing health care costs related to air pollution. In fact, the EPA estimates that “direct benefits from the 1990 Clean Air Act Amendments are estimated to reach almost $2 trillion for the year 2020, a figure that dwarfs the direct costs of implementation ($65 billion).”

The EPA can develop safeguards for unregulated pollutants

The Clean Air Act allows the EPA to limit air pollutants from stationary sources such as chemical plants, utilities and industrial plants, as well as automobiles and other mobile sources. The act grants the EPA the authority to let states develop individual plans to meet national health standards. It also allows the agency’s administrator to prescribe standards for any individual pollutants if he or she determines that such a pollutant “may reasonably be anticipated to endanger public health or welfare.” This is known as an “endangerment finding.”

At the turn of the 21st century, the evidence of the public health and economic threats posed by climate change grew. During the 2000 presidential campaign, Republican nominee George W. Bush promised to reduce carbon pollution from coal-fired power plants. Six weeks after taking office, however, he broke that promise. His administration essentially ignored any concrete steps to reduce the carbon pollution responsible for climate change in its May 2001 National Energy Plan devised by Vice President Dick Cheney—who largely consulted with Big Oil, coal and utility companies.

The Supreme Court decides that carbon can be a pollutant

In the wake of Bush administration inertia, states that were concerned about their growing vulnerability to damages from climate change sued the EPA under the Clean Air Act to force the government to take action. In 2007 the Supreme Court ruled in Massachusetts v. EPA that greenhouse gases are pollutants under the Clean Air Act, and as such, the agency’s administrator must consider whether these pollutants “may reasonably be anticipated to endanger public health or welfare.” If the administrator finds that this is the case, he or she has the authority to limit pollutant emissions.

After the Supreme Court decision, EPA scientists conducted an assessment of the public health and welfare impacts of carbon and other climate change pollutants and concluded that these emissions endangered the public. Agency Administrator Stephen Johnson wrote a January 2008 memo to President Bush stating, “Your Administration is compelled to act on this issue under existing law.” In other words, the Clean Air Act required the administration to make an endangerment finding—to explicitly state that greenhouse gas pollutants threaten human health and welfare. The president ignored this recommendation. No action was taken until the Obama administration took office.

In December 2009 the Obama administration’s head of the Environmental Protection Agency, Lisa Jackson, adhered to the recommendation of agency scientists and finally made the endangerment finding for six major greenhouse gases, including carbon dioxide. Jackson noted that the “impact on morbidity and mortality associated with higher temperatures” provided support for “a public health endangerment finding.”

Carbon pollution limits will apply only to the largest emitters

The Supreme Court decision and subsequent endangerment finding paved the way for the EPA to develop the first limits on carbon pollution from stationary sources, such as power plants and oil refineries, under the Clean Air Act.

This work began with the so-called “tailoring rule,” which limits carbon pollution reduction permits to only the largest industrial sources. Without the tailoring rule, the Clean Air Act would have required permits for sources emitting as little as 100 to 250 tons of a pollutant per year, depending on which pollutant. The EPA, however, found that this would “overwhelm the capabilities of state and local … permitting authorities to issue permits.”

The EPA determined that under this tailoring rule, “only 15,550 sources will need operating permits” and that nearly all of these facilities already had them. The agency noted that, “Without the Tailoring Rule 6 million sources would have needed operating permits” because the regulation would have covered millions of small emitters, as well. This would have overwhelmed states’ efforts to issue permits and could have effectively halted pollution control permits and systems.

The agency adopted the tailoring rule to ensure that “emissions from small farms, restaurants, and all but the very largest commercial facilities will not be covered by these programs at this time.” This means that only the biggest and baddest polluters would have to limit their emissions. Even with the tailoring rule, 67 percent of all stationary-source greenhouse gas emitters are covered by limits developed by the EPA. Big coal, utility and oil companies, along with other interests opposed to climate protection, have attempted to overturn this sensible rule, but the courts have so far denied these efforts.

After lengthy consultation with large numbers of stakeholders, the EPA proposed a carbon pollution standard for new power plants in March 2012. Since power plants are designed to last for at least 50 years, this rule would effectively prevent the construction and operation of new coal-fired plants that don’t incorporate carbon pollution capture and storage, therefore ensuring that we will not build the next generation of uncontrolled coal-fired power plants that would further exacerbate climate change.

There was overwhelming public support for the new power plant rule. Three million comments were submitted in favor of limiting carbon pollution for both new and existing power plants—a record number for the agency. The pending carbon pollution standard for new plants has been relatively uncontroversial because it overwhelmingly applies to future coal-fired power plants. According to the Sierra Club “Coal Rush” database of proposed coal plants, a maximum of 17 proposed power plants would be subject to this rule. Many observers believe that investors are uninterested in new coal-fired power plants because of the allure of cheaper, more efficient natural gas plants powered by shale gas.

The primary opposition to the proposed rule has come from the American Coalition for Clean Coal Electricity, a coal and dirty-utility front group. Ideological opponents funded by fossil fuel interests—such as Americans for Prosperity, which is funded by the Koch Brothers—also oppose the rule. But the largest, most influential power companies, as well as the Edison Electric Institute, have not unleashed a full-throated attack on the proposal. The EPA has given no signal since the election as to when it intends to finalize the proposed carbon pollution standard for new power plants or whether the final rule will be at all different from the proposed rule.

We must reduce carbon pollution from existing power plants

A carbon pollution standard for existing power plants would have significant impact on the roughly 600 existing coal-fired power plants by requiring them to reduce their emissions to the level determined in the rulemaking process. To reduce their pollution, these plants would probably employ some combination of fuel-switching to natural gas or co-firing with biomass; demand reduction via energy efficiency measures; and develop clean, renewable electricity generation.

The plan achieves climate protection and public health benefits, grossing between $26 billion and $60 billion in 2020 for a net benefit between six times and 15 times more than the cost of the plan. There would also be no disruption in power supply even as emissions decline.

This plan has wide bipartisan support. William Reilly, EPA administrator under President George H.W. Bush, noted that the plan “deserves to be carefully analyzed and to be taken seriously.” Carol Browner, senior distinguished fellow at the Center for American Progress and EPA administrator under President Bill Clinton, said that this plan is “very thoughtful and should be part of any debate” on reducing greenhouse gas emissions. John Podesta, Chair of the Center for American Progress and former White House chief of staff under President Clinton, noted, “Investments to achieve these reductions would create manufacturing, construction, and other well-paying jobs.”

As the EPA begins its efforts to protect the public from carbon pollution, coal companies, utilities and other big-emitting industries will be much more vocal in their opposition to a carbon pollution standard for existing power plants. As the damages from extreme weather and other climate change impacts grow, it’s more important than ever to use this law for its intended purpose: reducing pollution and protecting public health and welfare, rather than protecting the moneyed interests behind coal-fired power plants.