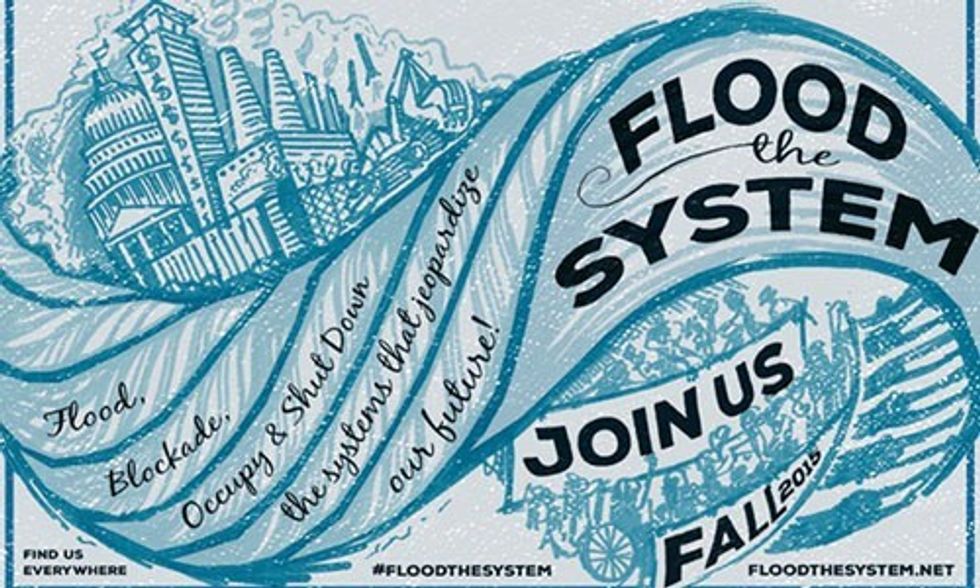 What is the relationship between organizing to slow, stop and reverse the climate crisis, a very big job with a very close deadline and organizing to bring together a unified movement against our oppressive system that links people concerned about climate, racial justice, women’s and LGBT rights, labor rights, peace, social and economic justice, equality and more?

This is the third column I have written on this subject. My first one, last November, was in the form of an Open Letter to Naomi Klein in connection with how she addressed this issue in her wonderful book, “This Changes Everything.” The second was written in mid-June, with a main focus on the importance of the Bernie Sanders presidential campaign and what this amazing development might teach us about this question.

This third column is the result of having read, “FLOOD the System: a VISION for movement momentum,” put together by Rising Tide North America (RTNA) to promote anti-system activities this fall leading up to the United Nations Climate Conference in Paris. I’m a member of one organization and one beginning-network that are supportive of the Flood the System general idea and that are connected with it. Because of that, I finally made the time to read FLOOD the System yesterday.

There’s a lot of good stuff in the 80-page booklet, including some creative original graphics. I’d encourage others to check it out by clicking here.

However, I came away from reading it feeling that the position it takes on the climate organizing/anti-system organizing question is one I disagree with. Two pages toward the beginning crystallized it for me.

On page 12, in a “History of FLOOD the System” section, RTNA explains that this new initiative emerged after the People’s Climate March and Flood Wall Street action in New York City in September 2014. These were very big actions: hundreds of thousands in the march and thousands engaging in civil disobedience on Wall Street the next day. Afterwards, “as we talked to various groups, the consistent piece of feedback was the need for Flood the System to be much broader than just about escalation within the climate movement, a need for an escalation framework that addressed deep root causes and could connect with and be owned by members of the migrant justice, racial justice, gender justice, labor and other powerful and growing movements in the U.S. and Canada. The climate movement has a history of seeing the climate crisis as a giant umbrella issue under which many other issues could fit. Flood the System is attempting to break this pattern.”

What this mean in practice, as projected on page 13, is this: “In November, right before the opening of the international summit to pave the way for capitalism in the coming decades [the Paris United Nations Climate Conference], we will engage in actions targeting the institutions that threaten our collective survival. Banks, immigration detention centers, rail and pipelines, extraction sites, police stations, government buildings will be overwhelmed as we expose the root causes of injustice in all its forms.”

First, RTNA is to be commended for its efforts to advance the movement, as far as its politics, its willingness to take stronger action and its breadth. This is not easy work and it is to their credit that they are continuing to work to make these actions in the fall as successful as possible. What they are trying to do is no small thing.

However, it seems as if RTNA’s position on the climate crisis and what to do about it is something like, “the only solution is revolution,” that climate/climate justice activists should put all of our eggs in that one basket.

I don’t see it that way. I think there are two distinct, though interrelated, tasks for those of us who

1. Understand how close to climate tipping points we are, close to developments that will make it extremely unlikely that we can prevent full-on, world-wide catastrophe.

2.  And who, also believe that the root cause of the climate crisis, as Pope Francis himself has said, is a system based on greed, domination, inequality and injustice.

One task is to build a climate/climate justice movement, a climate movement increasingly putting justice issues at the center of its work but which has as its focus day-after-day campaigning to weaken the power of the fossil fuel industry, to advance renewables and efficiency, especially locally-based rooftop solar and other locally-based renewables, to fight deforestation, etc. And the Paris conference is one short-term front of that movement. I believe that we should support efforts that are being made to push that conference to go as far as it can go, understanding that, the world’s governments being what they are and the influence of the fossil fuel corporatists over so many of them being what it is, it is very unlikely, impossible really, that the world’s ecosystem and all of its life forms will get in Paris what we need. We must be prepared to use whatever comes out of Paris to keep building the climate movement and the overall international people’s movement. No false illusions.

The other task is to link growing numbers of climate activists and organizations with “members of the migrant justice, racial justice, gender justice, labor and other powerful and growing movements,” building a multi-issue, intersectional, transformational mass movement for power to the people and not the “billionaire class,” as Bernie Sanders calls it.

What is so positive and exciting about this historic moment, 2015, the time we are living in, is that both of these movements are growing and there is interaction among them, not so much in an organizational sense but in a cultural/social sense, in the interpersonal connections that exist and will continue to grow and deepen. Building and strengthening these connections is strategic work right now.

But we need to be clear that both are needed. There must be a movement which has as its primary task work to prevent worldwide climate catastrophe. And there must be a movement of movements that makes the links and connections and builds consciously toward a world where love, justice and equality are truly the underlying operating principles of people’s lives and society’s institutions.

Ted Glick has been an activist, organizer and revolutionary since 1968. Past writings and other information can be found at http://tedglick.com, and he can be followed on Twitter at http://twitter.com/jtglick.

Bernie Sanders Draws 28,000 in Portland, Largest Turnout for Any Presidential Candidate This Year

Fox News Asks Sen. Graham: How Can Republicans ‘Trust’ You After Working on Climate Bill?