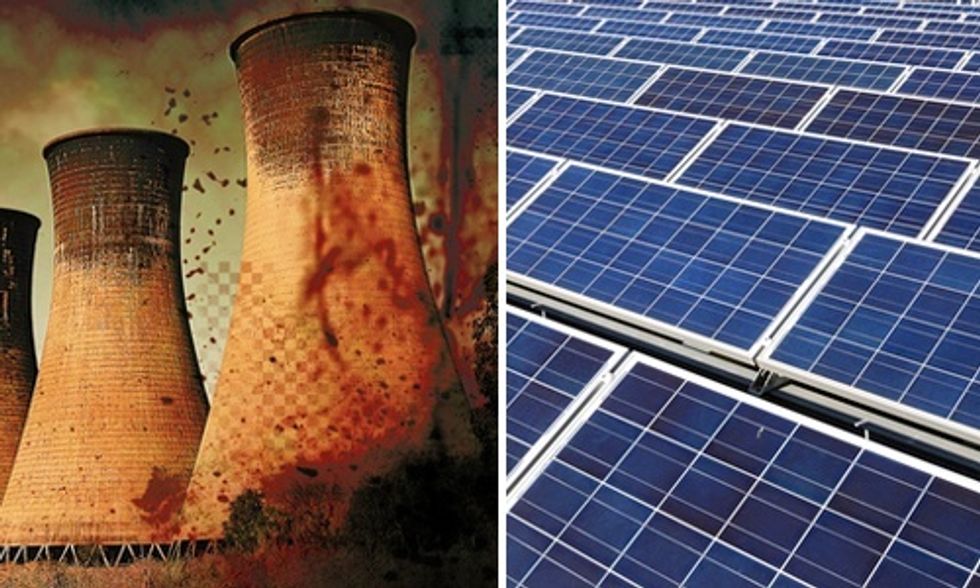 The question of how to finance a global transition from fossil fuels to clean energy is perhaps the most critical and difficult issue in the upcoming United Nations climate negotiations that will take place in Paris, starting in late November. Three contentious issues are on the table.

First, how should developed countries mobilize $100 billion a year by 2020 for mitigating and adapting to the adverse effects of climate change, largely through the Green Climate Fund (GCF) agreed upon during the Cancun round of UN negotiations. Second, what should be the balance between public and private sector funding in reaching the $100 billion a year goal. Third, to what extent should public funding be based on finance mechanisms versus grants?

All of these are important issues, but arguably, they are all encompassed within a much larger question. Namely, how much needs to be spent on renewable energy projects each year in order to enable the rapid transition to a clean energy economy?

This rate of spending is simply way too low if we are successfully to keep carbon dioxide levels in the atmosphere below the 450 parts-per-million (PPM) level that many scientists believe would keep temperature increases resulting from greenhouse gas emissions below 2 degrees Celsius. CERES and the International Energy Agency estimate that the rate of investment in clean energy needs to be doubled by 2020 and quadrupled by 2030 to $ 1 trillion/year in order to achieve the 450 PPM goal.

Thus, no matter what else we do to address climate change—whether it’s introducing a carbon tax, creating a cap-and-trade system, or adding tax incentives—we cannot transition to a clean energy economy without generating extremely large investments in renewables.

Such large investments are possible. In 2012, the world made $4 trillion in infrastructure and capital spending investments and this number is expected to increase to 9 trillion in 2025. So the funds are there. Also, $1 trillion/year level of investment in renewable energy would create massive numbers of jobs and sustained economic growth. The crucial question is what is needed to direct those funds into renewable energy investments.

The first key is that this money has to come from private investors. Governments can help, but they simply cannot generate this amount of funding on a yearly basis due to political barriers and constituent expectations.

Third, governments can play a vital role in encouraging these investments. There are a series of tools that can help with this: low-cost financing through green banks or the GCF, green bonds, loan loss reserves, public pension fund investments and risk insurance are just some examples.

Fourth, barriers to the deployment of renewable energy must be removed. As of today there are myriad laws that make the deployment of renewable energy difficult if not impossible. Classic examples include limitations on the ability of owners of rooftop solar to sell electricity back to the grid and laws that prevent the leasing of rooftop solar energy systems.

Fifth, putting a price on the cost of carbon pollution will speed up and solidify this transition since it will make renewable energy more competitive. Such a price would be fair—after all, the price of a product should include all of its costs on society.

Sixth, some of the tension in UN climate negotiations will ease as renewables become fully cost competitive (though funding for adaptation will still be an issue). Many developing countries argue that building renewable energy facilities is more expensive than building fossil-fuel-based facilities and that they are doing so only because of problems created by historical carbon emissions by developed countries. But, this argument loses immediacy if in fact renewables are fully cost competitive and installing them either has no negative impact on economic growth—or it spurs economic growth more than fossil fuel investments.

Seventh, it is far easier to finance a project than it is to support it with grants, in part because most funds lent are repaid and can be lent out again. This doesn’t mean that grants will remain unimportant. Where renewable energy is not competitive, even with low-cost financing, grants can further decrease the price of renewable energy because they do not have to be repaid. And there are some projects where the users of the energy generated cannot repay the cost of even fully competitive renewables.

You can help ask world leaders the key questions. Join with millions around the planet demanding a strong climate agreement in Paris by adding your name to our Road to Paris petition. You’ll help build support for a breakthrough agreement at a critical moment and we’ll keep you updated on important policy developments in climate finance and other areas.

In another win for climate campaigners, leaders of 12 major cities around the world — collectively home to about 36 million people — committed Tuesday to divesting from fossil fuel companies and investing in a green, just recovery from the ongoing coronavirus pandemic.