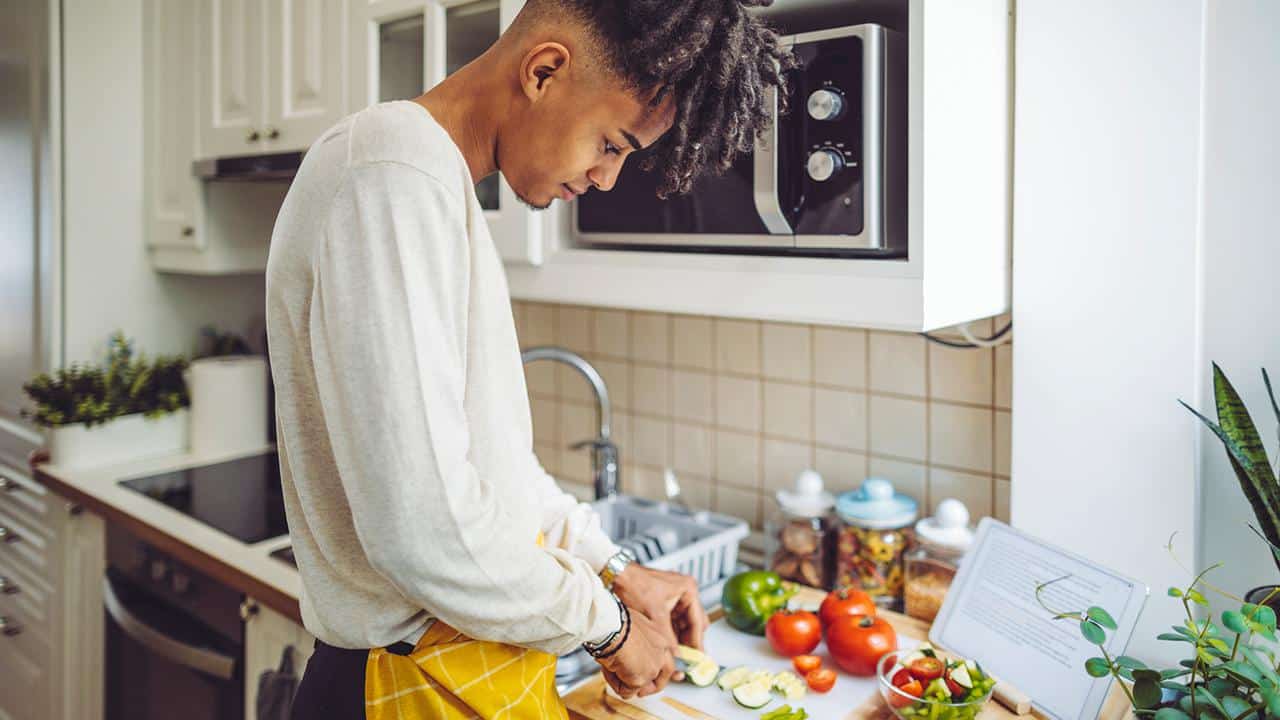 It’s common knowledge that meat has an outsized impact on the environment, but a new study finds that the consequences are even more dire than previously thought. The study, published by Nature Research in 2021, determined that meat is responsible for nearly 60% of all food-production-related greenhouse gas emissions, which is 2x more than plant-based foods. In terms of total global emissions, 14% come from livestock alone, and beef is the main culprit. To put it into perspective, 2.5kg of greenhouse gases are emitted to produce 1kg of wheat, while 70kg are emitted to produce a single kilo of beef.

Meat consumption is directly linked to human-caused climate change and the extreme weather and temperature events of recent years. It also has a proven impact on water and air pollution, deforestation, and global loss of biodiversity. To prevent catastrophic warming, scientists warn that drastic changes must be made regarding our food choices, and soon; to meet global emissions goals for 2050, the World Resource Institute recommends that all wealthy nations cut their consumption of dairy, beef, and lamb by 40%.

We wield great power with our food choices, and small changes to our diet can make a big difference. Corporations are responsible for the vast majority of global greenhouse gas emissions, but individual choice is still an important tool for combatting climate change and environmental degradation, including what we put on our plates.

Plant-based alternatives have rapidly gained popularity in the last 15 years; in 2020, Ipsos Retail Performance conducted a study of retail traffic data that concluded that 9.7 million Americans are now following plant-based diets, which is an increase of 9.4 million since 2004. With the new, plentiful options for plant-based food available to consumers, many are ready to consider replacing meat in their diet. While vegetarian and vegan diets aren’t automatically healthy, eating less meat is associated with lower risk of high blood pressure, cardiovascular disease, type 2 diabetes, and even some cancers, which has also encouraged many to go plant-based.

Going fully vegetarian or vegan is a great goal, but you don’t need to cut out meat entirely to make a difference with your dietary choices. The flexitarian diet – a term coined in the early 2000s – focuses on eating fruits and vegetables, nuts, whole grains, and other plant-based items, but gives individuals the leeway to still enjoy meat on occasion without making it a part of their daily routine. A flexible plant-based diet like this opens up the possibility of eating less meat without a full commitment to vegetarianism or veganism.

Whether you’re strictly plant-based, a flexitarian, or just beginning to explore meatless eating, here are a few easy tactics for cutting down on meat in your meals.

Treat Meat as a Side Dish, Not the Main Course

You can still enjoy animal products while also minimizing how much of your plate they take up.

Protein is an important part of a healthy diet, but evidence suggests that we eat much more than is necessary. It is recommended that women and men consume 46 and 56 grams of protein a day respectively, but American men consume an average of about 100 grams per day, leaving plenty of room to reduce meat in the average diet.

The American Cancer Society recommends eating only 3-4oz of meat per meal, which is about the size of a bar of soap or deck of cards. Instead of allowing meat to take up the majority of your plate, let whole grains and vegetables take up more space. Alternatively, substitute some of the meat for a plant-based alternative; for example, in a homemade mushroom Bolognese, substitute half of the ground meat for mushrooms.

It is important to note that protein can be derived from many foods besides meat. Tofu, nuts, seeds, pulses – edible seeds that grow in pods, including all beans and peas like chickpeas, lentils, garden peas, black beans, etc. – and vegetables are great sources of protein.

Lots of soups and cold-weather comfort meals call for stock. As we head into the winter season, swapping out chicken or other meat-based stock is a simple way to make your favorite meals vegetarian without sacrificing flavor. Vegetable broth cubes and stock are available at the grocery store alongside their meat counterparts, and are typically of comparable price.

If you make your own stock, try making it with vegetables instead. Wash the dirt from a few onions, carrots, and celery sticks; remove skins and carrot tops and coarsely chop all the vegetables. Put the veggies into a large pot of water (filling so there are a few inches of water on top) with some thyme, peppercorns, parsley, and a bay leaf, or whatever other herbs you like. Simmer for an hour or so, stirring now and then until the water is infused with the vegetable flavor. Remove all the veggies with a slotted spoon, then pass the mixture through a piece of cheesecloth to remove all particles. The stock can be stored in the refrigerator for one week, or in the freezer for up to three months.

For an even more environmentally-friendly stock, use vegetable scraps to infuse the water instead of tossing them in the trash. Store scraps in bag or Tupperware container in the freezer, adding to it whenever you have skins, stalks, or vegetables about to go bad. Follow the same recipe, swapping out the fresh vegetables. Avoid certain vegetables if you can; starchy vegetables like potatoes and turnips make the stock a little cloudy, green beans and zucchini become bitter when boiled, and beets overpower the other flavors. Make sure all scraps are washed thoroughly to prevent a muddy stock.

The thought of giving up a chicken dish your mom made, or a traditional meal important to your family or culture, might be too much to accept. Satisfy cravings for your favorite meals by using meat substitutes, which can often taste very similar (or, give a new twist) to the original. Tempeh, seitan, and tofu can be good replacements for meat in stir fry, and unripe jackfruit has a similar texture and appearance as shredded chicken or pulled pork. Proper seasoning can make these food products quite similar to the real thing, and the internet is ripe with recipes and tricks for preparing them.

Lots of products are created to mimic specific meat items as well. Gardein is known for their “chick’n” products, and Morning Star burgers, breakfast sausages, bacon, and chicken nuggets are popular (and affordable) meat substitutes to keep on hand in the freezer. The Beyond Meat and Impossible Foods brands has become very popular, especially for their packaged ground “meat” that can be used in place of ground beef. You’ve probably heard of the Impossible Whopper at Burger King – released in 2019 – so you can still have your favorite fast-food sandwich on the go. Other fast-food chains are following suit, like Panda Express, which has begun rolling out their new Beyond Meat Orange Chicken. Many grocery stores – like Trader Joe’s, Wegmans, and Whole Foods – have their own lines of meatless products, which are usually more affordable than Beyond or Impossible products.

Kitchn has a great flow chart to help new plant-based eaters decide where to start with plant-based meat substitutes.

Get Creative (and Flavorful) with Tofu

Tofu is a popular soy-based meat alternative that originated in China 2,000 years ago, and is also important to traditional cuisine in Thailand, Vietnam, Indonesia, and other countries in East and Southeast Asia. Its mild flavor makes it an optimal blank canvas to use for your meals in place of meat and is an easy way to get protein into your meals. Crumble it up for a tofu scramble or meat stand-in for tacos, marinate before grilling, fry with spices and oil as an addition to meals and sandwiches, or blend in a sauce. It’s also relatively inexpensive, unlike some meat substitutes.

Here are a few recipes to get you started:

If you’re feeling especially adventurous, you can make your own tofu and avoid the plastic packaging, and get exactly the right firmness for your needs.

Plan Meals Ahead of Time

If meat is a substantial component of your current cooking routine, meal planning can prevent falling back into those easy, meat-heavy meals or fast food. Some vegetarian and vegan recipes also require more ingredients to manipulate flavor, so plan ahead for what you’ll need, including spices.

Eating more vegetables might also open the opportunity for food waste. Thirty to 40% of the food supply in the U.S. is wasted, and without planning meals ahead of time, fresh produce might get left to rot in the fridge. Create a list of what fresh food items you need, and plan to make those dishes before the ingredients go bad.

Planning filling, flavorful, and satisfying meals will encourage you to continue your plant-based-eating journey; if you don’t make meals you actually enjoy, you’re much more likely to give up on it. Before a busy week, make large amounts of a meal and pack in Tupperware for the week or freeze for later. Having frozen fruits and vegetables on hand is also helpful, and you can buy and freeze your own, which is much cheaper than buying them pre-frozen.

Beans and nuts are more well-known plant-based protein sources, but some grains also pack a major protein punch. One-hundred grams of cooked quinoa has about 4.5g of protein, buckwheat about 5g, and oats nearly 10g. Many of these – including less-popular high-protein grains like spelt, amaranth, sorghum, and teff – can be used to make flour as well.

For an easy protein swap in your favorite pasta dishes, replace white with protein-rich, whole grain pasta, which will keep you full for much longer. Grain bowls with roasted vegetables and dressing or hummus can also deliver meat-free protein to your diet.

Start with a Meatless Monday, or Two Meals a Day

Many schools and organizations have begun their own “meatless Monday” initiatives, encouraging individuals to eat vegetarian for one day of the week. Choose one day of the week that works best with your schedule to eat meatless. While you’re still learning the tricks of cooking vegetarian, choose a day where you’ll have more time during the day to cook. This small change can be quite significant; if you ate one less serving of beef per week, that alone would prevent the emissions equivalent to 348 miles of driving.

In his recent book, We Are The Weather, Jonathan Safran Foer advocates for taking the flexitarian diet even further, and urges readers to eat two plant-based meals per day. He argues that dinner usually includes culturally-important foods, but going vegan/vegetarian for lunch and dinner will still drastically reduce the amount of animal products we consume. If full vegetarianism or veganism doesn’t work for you, perhaps this method can fit into your routine.