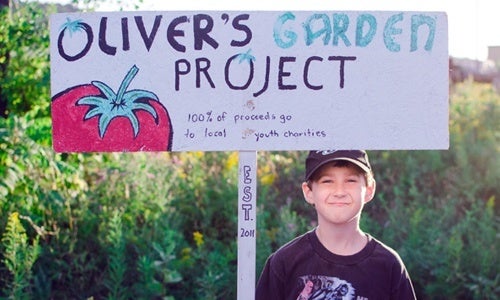 Oliver is the poster child for the “grow food not lawns” movement. Four years ago, when he was just six years old, he turned his lawn into a productive urban farm—with a little help from his younger sister, his parents and a $15,000 grant from Nature’s Path. The $15,000 Gardens for Good grant allowed Oliver’s Garden Project to blossom into a series of mini-farms across Oliver’s inner city Hamilton, Ontario neighborhood, all dedicated to raising funds for at risk youth and feeding his community. 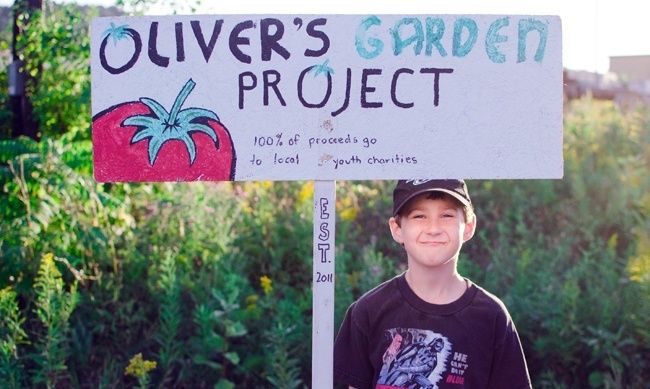 Like countless other children in neighborhoods across North America, Oliver lives in a food desert, meaning his family and community don’t have easy access to fresh, healthy food. Children and students are at an especial disadvantage. One day, driving with mother Stacey Allen-Cillis, Oliver saw two kids rummaging through a recycling bin, and when he realized they were probably collecting cans to get money for food, he was inspired to spark change. A small family garden became the impetus to raise funds for kids in his community—says Stacey, “Oliver convinced us that rather than selling what we grew to fund our summer vacation, the money we raised should go to kids in our community who were in need.”

All of the money raised from the vegetables grown by Oliver’s Garden Project go to low income families and children. The family chooses an organization to donate to each year—one that’s committed to Oliver’s vision of healthy food in Hamilton. Gardens for Good helped take this family initiative to the next level when they won the $15,000 grant to expand their operations. The original lawn-turned-garden became five gardens spread across their community dedicated to helping families in need grow their own food, as well as a series of workshops to empower and provide ongoing support.

Since winning the grant from Nature’s Path, Oliver and his family have been very busy indeed. They’ve run after school programs to get kids growing in greenhouses and making healthy recipes, have set up a garden at Oliver’s school, and have found a market for their signature heirloom tomatoes in local food trucks. “Tomato candy,” Oliver’s mom Stacey says of this popular crop, “little rainbows in a bag.”

For Oliver and his family, the best part of the Gardens for Good contest—aside from helping their community—was feeling that same community rally behind them to win the grant. Oliver may have planted the seeds for change, but it was his community that helped good things grow. And the community support has grown along with the project, says Stacey. “We get so much wonderful feedback, from people who share our story with others, to people who tell us how we’ve inspired them to put a garden their own backyard, daycare or school. It’s been such a forward motion.”

With all this success come limitless possibilities for Oliver’s Garden Project. Stacey says that “Oliver’s Garden Project has never veered from our main goal of grow, sell, share and we’ll always stick to that. We’re so happy to be involved with our community, and we want to keep sharing and spreading the love.“

Oliver is making big change on a small scale. It just goes to show, growing food—and empowering communities to do the same—has an amazing capacity to transform the world, build a better food system and change lives. Do you have an urban garden project of your own, or know someone who does? Follow Oliver down the garden path and apply for your own Gardens for Good grant before June 22—you could win $15,000 to grow your farm and create lasting change in your community.