How Tesla's Massive ‘Gigafactory' Could Lead to 500,000 EVs Per Year 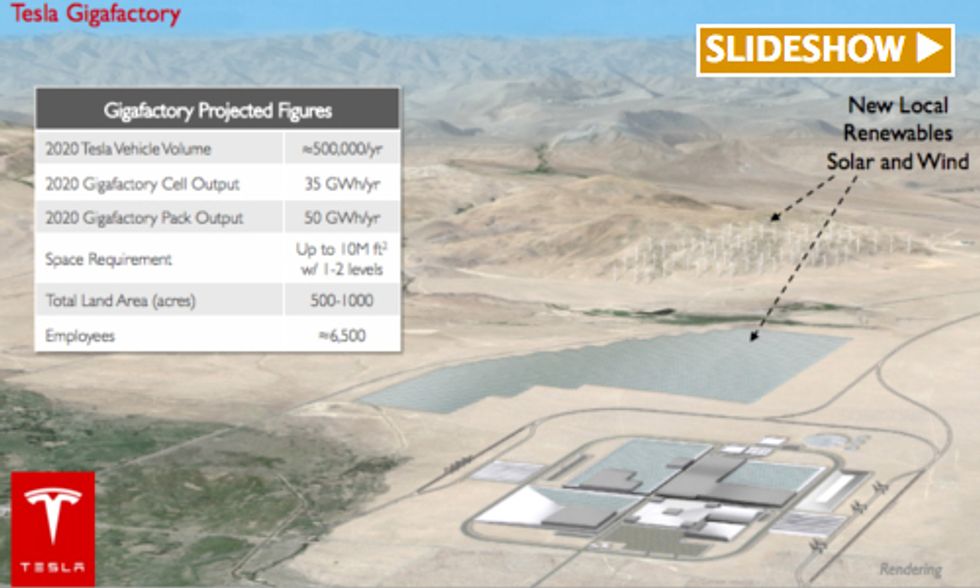 In three years, you might see a massive electric vehicle (EV) market in the U.S., and based on the amount of money the company plans to invest, it wouldn't be a surprise to see Tesla at the forefront of it.

The Palo Alto, CA-based automaker this week released details and goals associated with its plans for a "Gigafactory"—a massive structure that by 2020 could produce 500,000 EVs per year and more lithium ion batteries than are currently produced around the world. While Tesla will directly invest $2 billion into the facility through 2020, its to-be-determined partners would add another $2-$3 billion through 2020.

This could be the reason for CEO Elon Musk hold at least one mysterious meeting with Apple in the past year.

“We had conversations with Apple. I can’t comment on whether those revolved around any kind of acquisition,” Musk told Bloomberg.

"As we at Tesla reach for our goal of producing a mass market electric car in approximately three years, we have an opportunity to leverage our projected demand for lithium ion batteries to reduce their cost faster than previously thought possible," the company wrote in a blog post. "In cooperation with strategic battery manufacturing partners, we’re planning to build a large scale factory that will allow us to achieve economies of scale and minimize costs through innovative manufacturing, reduction of logistics waste, optimization of co-located processes and reduced overhead."

Given its plans to invest billions, it makes sense for Tesla to drum up the dramatics as it decides where to build its 10 million-square-foot facility. The site would need to be in a location that would make it feasible to deliver finished battery packs to Fremont, CA for EV assembly. So far, the list has been whittled down to locations in Texas, Arizona, Nevada and New Mexico.

The Gigafactory is expected employ about 6,500 people. It will also likely be powered by a combination of solar and wind energy.

"By the end of the first year of volume production of our mass market vehicle, we expect the Gigafactory will have driven down the per [kilowatt hour] cost of our battery pack by more than 30 percent," the company estimates.