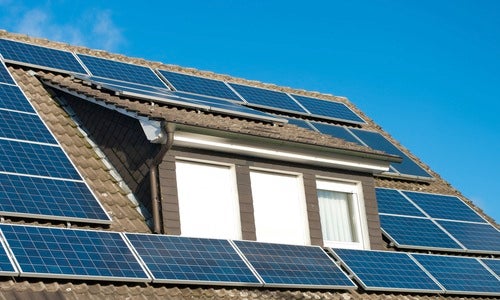 Plenty of additions can add to a home’s market value, and a roof with solar panels is no exception.

The Lawrence Berkeley National Laboratory‘s (LBNL) Electricity Markets and Policy Group released a report with the numbers to prove it, too. According to LBNL, home values can increase by $5,911 for each kilowatt (kW) of solar energy generated by a rooftop system.

Most California homes can produce 2 to 5 KW, so, clearly, bigger is better when it comes to home premiums and energy production. The study also indicates that buyers are gravitating to solar homes with newer systems.

“The take-away here is the market is showing that [photovoltaic] PV is valued by home buyers,” LBNL staff research associate Ben Hoen told the San Francisco Chronicle. “There could be a green cachet for the PV system that would be over and above the expected price.”

“They might be perceived as older technology, even if they’re still producing electricity at the expected rate,” Hoen said. “An individual home is going to have its own, individual premium for PV.”

Still, adding a solar panel pays for itself in the way of energy savings and can be a nice complement to renovations and other factors to add to a home’s value. That will become even more evident as more real estate appraisers figure out the best ways to assign value to solar systems.

“Valuing homes with green technologies of various kinds is becoming more common,” he said. “It’s not a process that happens overnight, but it is happening.”

LBNL plans on updating the study soon and looking at other states, too. Prices have dropped dramatically since the final year of the data used for the study. In California alone, prices dropped from $10.60 per watt in 2009 to $5.67 per watt this year, according to the state’s Go Solar website.

Nationwide, the average cost is $4.99 per watt and expected to decrease each year.