How Solar Energy Empowered a Nicaraguan Community Once Devastated by War 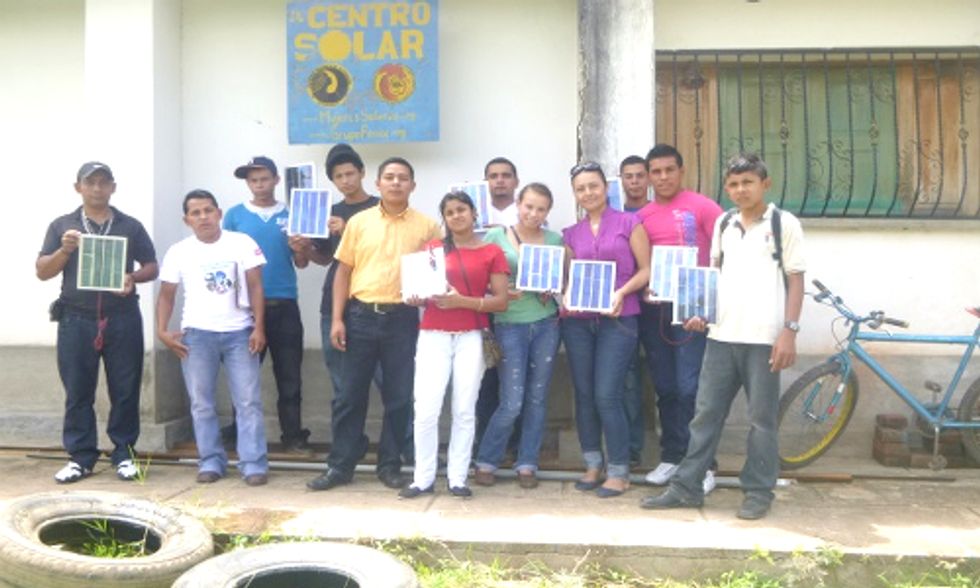 Forty years ago Sabana Grande, a small community in northern Nicaragua, was ravaged by war. Now you will find people sitting under solar-powered lights, eating solar-cooked chicken, and drinking smoothies made by a bicycle-powered blender. Sabana Grande (pop. 2,000), in the mountains of Totogalpa, about 20 miles from the Honduran border, has embraced a solar culture that has transformed the community.

Grupo Fenix, a consortium that helps small communities with the use of renewable energy, taught Sabana Grande villagers how to solder together discarded solar cells they received from some large photovoltaic manufacturers to make solar PV panels, up to 60 watts in size. Photo credit: Grupo Fenix

The war between the government Sandinistas and the Contra rebels left hundreds of people disabled by landmines, especially in the northern part of the country. In 1999 a Nicaraguan non-governmental organization (NGO) called Grupo Fenix received a grant from the Canadian Falls Brook Center to reintegrate landmine survivors back into society. The NGO decided it would teach the landmine survivors how to make solar panels, providing them with both a livelihood and a way to get electricity in a poor, off-grid region. It focused on Sabana Grande, an agricultural community in one of the poorest regions in one of the poorest departments of Nicaragua.

Grupo Fenix, founded by engineering professor Susan Kinne of the Engineering University of Nicaragua and made up of many of her engineering students, taught the villagers how to solder together discarded solar cells they received from some large photovoltaic (PV) manufacturers to make solar PV panels, up to 60 watts in size. They also held classes on installing and maintaining off-grid solar PV systems. The Sabana Grande solar workshop was born, and soon a few of the trained farmers-turned-technicians started selling small solar home lighting systems to people in the community and throughout the region.

Marco Antonio Perez is one of the landmine survivors trained by Grupo Fenix. “One gets a complex, and believes that their life is over,” he said. “To reintegrate into society, to feel useful again, took five years.” After being training in photovoltaics, he directed the Sabana Grande solar workshop for years, and now runs a solar company in a nearby town. Despite his lack of a formal education, having only graduated from the 6th grade, he has traveled to Haiti and Costa Rica to teach people how to construct solar panels, and is a co-author of a paper on an encapsulation method he helped develop in Elsevier’s journal Solar Energy Materials and Solar Cells.

The engineering students also brought along some solar cookers, and showed them to the women in the community. The women were intrigued—in Nicaragua approximately 90 percent of the rural population cooks over open fires, and respiratory diseases are the leading cause of death for women. Soon the women were learning how to build their own solar cookers and using them to cook for their families, greatly reducing their firewood consumption and smoke exposure. The women were hooked, and organized themselves into an organization called Las Mujeres Solares de Totogalpa—the Solar Women of Totogalpa, which officially became a cooperative in 2010. In early years of the group’s work they had been constructing solar cookers based out of different members’ homes. In 2005 they decided they needed a place of their own.

With the help of Grupo Fenix, the Solar Women acquired three acres of donated land along the Pan-American Highway and secured a grant from the Noble Foundation. They then embarked on building their own solar center to house both the PV workshop and the solar cooker workshop. The women learned how to make adobe bricks and after donating thousands of hours of time and making 6,000 adobe bricks, they built their own building which houses an office, a warehouse, and workshop space for constructing solar panels, solar battery chargers, solar cookers, and solar driers.

A woman in Sabana Grande displays the cake she made using a solar cooker. Photo credit: Laurie Guevara-​Stone/Rocky Mountain Institute

While experimenting with their solar cookers the women made an interesting discovery with coffee, one of Nicaragua’s main export crops. Since the country’s good beans are exported leaving the bitter green beans in the country, coffee found in Nicaragua is not very tasty. But when the women roasted the coffee beans in the solar ovens it took the bitterness away, and left a rich, delicious flavor. Wanting to market their new discovery, along with the solar dried fruits and recipes they were developing for the solar ovens, they decided to create a restaurant.

Through more grants, the women built the first solar restaurant in Nicaragua aptly named La Casita Solar (The Little Solar House). They grow their own organic fruits and vegetables on adjoining land. The restaurant has solar-powered lights and a freezer, and uses solar cookers, fuel-efficient charcoal stoves (from charcoal made from the agricultural waste from their land), biogas stoves (from biogas made from the restaurant’s latrine plus added cow manure), and fuel-efficient firewood stoves. “Truly, it has been a success for us, the Solar Women, to build this dream that we’ve had.” according to Nimia Lopez, a cooperative member.

Empowering the next generation

Local kids wanted to get in on the action as well, so the Solar Youth group was formed. One of their first projects was to construct a bicycle-powered blender, which is now used at the solar restaurant. Getting the youth involved was important for Grupo Fenix and for the Solar Women. The school in the community only goes up to the 6th grade, is overcrowded, and has little access to educational resources like books. Many of the women in the Solar Women’s group only have a second or third grade education, and they wanted more for their kids. One of the most recent projects Grupo Fenix has undertaken is to help the community build a solar youth center. With the help of Earthen Endeavors Natural Building, the group recently built a beautiful building out of earthen materials—cob, wattle and daub, adobe and earthen plasters.

The building will be used as both a preschool and daycare center—two services not currently available in Sabana Grande, and will provide extracurricular activities, after school tutoring, and environmental education for older children and teens, as well as parenting classes for adults.

The Solar Women have put thousands of hours of labor into these projects, and there were times when things were moving slowly and morale was down. With help from Grupo Fenix and an international economics major volunteer, the group came up with an innovative solution to secure compensation for their efforts. Each woman logs her hours spent working with the cooperative. Those “green hours” can then be used to purchase a solar cooker, a solar PV lighting system, or other appliances such as flashlights and battery chargers that are either donated to the group or bought with cooperative funds.

Nicaragua continues to be the second poorest country in the western hemisphere (after Haiti), and only 30 percent of the rural population has access to electricity. Yet the people of Sabana Grande have shown that a brighter future is possible. Unlike many development projects where an NGO leaves the community after a project is completed, the Managua-based Grupo Fenix has stayed with this community for 15 years helping them grow and realize their full potential. “What’s happening in this community,” Susan Kinne explained, “is a good example of how people can learn to work together with nature, work within the limits, and still make a higher quality of life.”

It’s no doubt that this community has been completely transformed by renewable energy technologies.