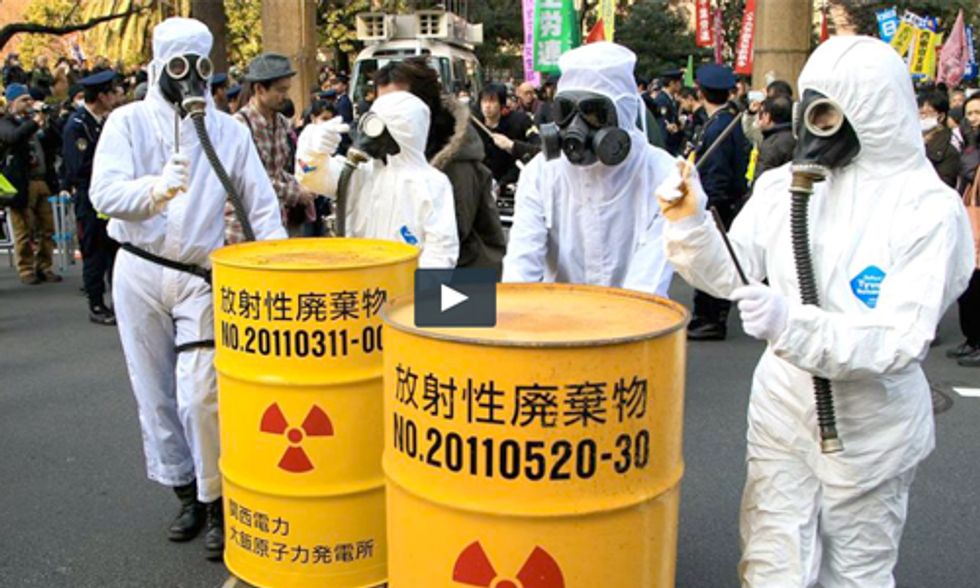 Naoto Kan tells PBS's Miles O'Brien he looks forward to a Japan where "all electricity produced by nuclear power will be supplied by solar panels."

Kan was Japan's pro-nuke Prime Minister until three melt-downs and four explosions ripped Fukushima apart and spewed its unmeasurable clouds of deadly radiation into the air and ocean.

Now a member of Japan's Diet, Kan has covered his own home's rooftop with solar panels, which he believes are the key to his country's energy future. He is one of five Japanese ex-Prime Ministers now in opposition to atomic energy.

O'Brien puts Kan at the center of his third and final exploration of the Fukushima disaster and its impact on the archipelago. His report cuts deep to the core of a nation now 80 percent opposed to nuclear power, but cursed with Prime Minister Shinzo Abe, a militaristic right-wind reactor backer surrounded by talk of bringing atomic weapons to Japan's armed forces. Abe wants to restart as many of Japan's idled 48 reactors as he can (thankfully, the six at Fukushima Dai'ichi have been declared permanently dead).

To back his corporatist campaign, Abe has perpetrated—with U.S. support—a State Secrets Act that threatens Japanese citizens with 10 years in prison for criticizing atomic energy.

O'Brien doesn't mention that. But he does talk with Hirohiko Izumida, governor of the province that hosts seven reactors at Kashiwazaki that were struck by an earthquake in 2007. Tokyo's attempt to reopen them is "exceedingly arrogant," he tells O'Brien.

Most corporate reports on Fukushima purport that its radiation won't hurt anyone and that Japan needs those nukes, with nothing but corporate talking heads to deliver an increasingly preposterous message.

By contrast, O'Brien's three reports have penetrated the issues to their core. This final dispatch looks at Japan's prospects for replacing atomic power with renewables, from a massive solar farm built by Kyocera to a 50-turbine wind project at Kamisu. After Fukushima, he says, "Maybe atomic energy will be safer. But will it be safe enough?'

Watch the first episode of O'Brien's Fukushima special: PBS Takes Us on a Terrifying ‘Post-Apocalyptic’ Tour Inside Fukushima.