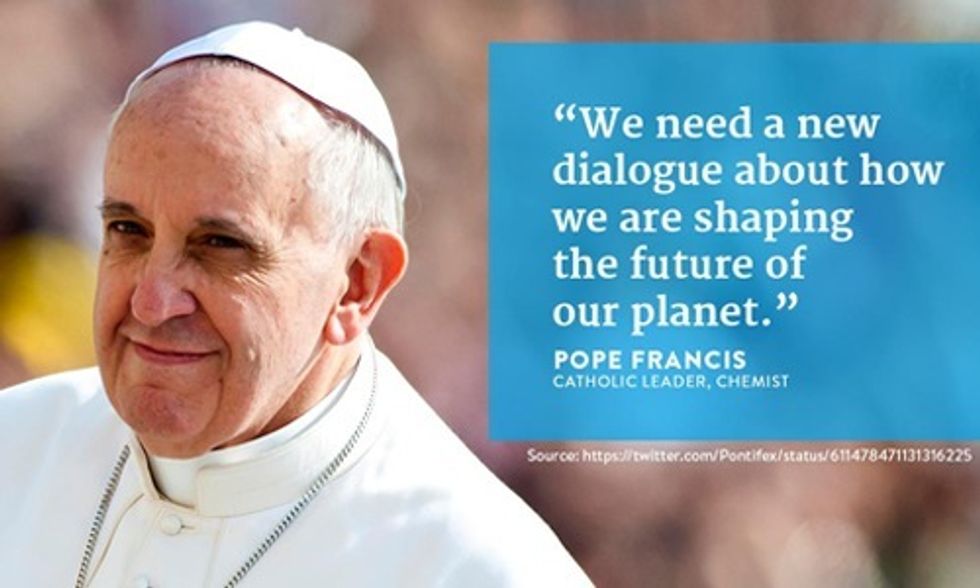 The Republican reaction to Pope Francis's climate encyclical, juxtaposed to the Democratic congressional rebellion against President Obama on trade, suggest that climate and energy are powerfully disrupting the grid-locked orthodoxy which has dominated American politics for the last decade.

The Tea Party-Koch brothers wing of conservatism, (and the corporate wing of the Democratic Party), are clearly on the defensive.

The most significant “tell” is the flailing responses of reactionaries to the looming threat posed to climate denial by Pope Francis’s Laudato Si.

Jeb Bush’s latest flip-flop—first asserting in New Hampshire that he wouldn’t take his economics from his church, and then backpedaling in Iowa—was merely the most recent spasm of right-wing discomfort.

Earlier Rick Santorum’s sputteringly strove to explain—on Fox news—why he was scolding the Pope, who has worked as a scientist, for speaking on climate, while Santorum himself, as a politician, had both right and duty to his own climate pulpit.

The assault began when the Heartland Institute tried to bully the Pope—unsuccessfully—into withholding or water down the encyclical by arguing that some of the voices urging climate action—UN Secretary General Ban Ki-moon and Columbia economist Jeffrey Sachs—opposed the Catholic Church on abortion. Indeed the overriding, major chord of the conservative assault on the encyclical is that Christian values only govern sex and family—economics, geopolitics, and climate should be left to secular, capitalist ideology.

Pope Francis’s allies within the Church understand what this means better than outsiders. Archbishop Pedro Barreto Jimeno of Huancayo, Peru warned that Francis “will have many critics, because they want to continue setting rules of the game in which money takes first place. We have to be prepared for those kinds of attacks.”

The Pope took his critics into account—making it clear within the text of Laudato Si that his approach to the environment is firmly rooted in traditional Catholic views of the uniqueness of human life and the need for a non-market based common good—drawing a line clarifying that he is not preaching a “new age” form of Catholicism.

(Reactionaries’ bewilderment that the Catholic Church’s option for the poor extends to concerns about protecting the poor from greenhouse enhanced droughts, heat waves and rising oceans echoes their glib assumption that a presumed “social conservatism” would fence in American Hispanic voters, override their communitarian economic and environmental attitudes, and allow Republicans to retain Hispanic voter loyalty while still promising to “self-deport” 11 million of their relatives).

It is more a gale than a fresh breeze when the most ground-breaking Pope since John XXIII links poverty and climate, in a way which leaves the far-right sputtering—(just as it was a powerful symbol when a daughter of the Church, House Minority Leader Nancy Pelosi, broke with President Obama on trade citing climate concerns).

Indeed, something fundamental is shifting this summer in political and cultural attitudes around climate.

Compare this year to the summer that preceded Copenhagen; the dominant 2009 news on climate was the grinding failure of the U.S. Senate and the Obama Administration on climate and energy legislation. And the rest of the news was equally dispiriting—no progress, little ambition, cynicism about the prospects.

Six months out from Paris, a new dynamism is palpable. Hawaii just committed itself to 100 percent clean energy by 2045. The California Senate pledged the world’s seventh largest economy to a 50 percent emission cut by 2030—including petroleum. The first quarter witnessed a stunning 76 percent growth in U.S. residential solar installations over the previous year. Georgia joined the growing list of states that permit homeowners to generate their own rooftop solar electrons, while giant (and historically conservative) Georgia Power proclaims that it will promote and grow clean power just as aggressively as it previously dominated coal and nuclear.

Globally renewable energy was more than half of added capacity. Chinese emissions declined in the first quarter by an amount equal to the total carbon pollution of Great Britain, Mexico became the first major emerging market to pledge solid emission reductions, and Ethiopia offered to reduce its projected 2030 carbon pollution by 64 percent—if climate finance is made available. Alberta tossed out its pro-tar sands Conservative Premier and elected the first left-leaning government in its history.

Led by “Climate Chancellor” Angela Merkel, the world’s major industrial nations called for a binding climate treaty at the “upper end” of the ambition levels required by climate science, and agreed that the era of fossil fuels must end  this century. The Saudi Oil Minister signaled that his kingdom fears the era of oil by end by mid-century. And 199 nations meeting in Germany reached a breakthrough agreement on how to curb deforestation and lay the groundwork for an eventual reduction—through forest and grassland sequestration—in atmospheric carbon concentrations.

The price of oil remained mired below $70; OPEC agreed again to keep pumping and fighting for market share; and the share value of coal companies, already down by three-quarters, just kept slumping. (Purchasers two months ago of Peabody junk bonds have already lost 18 percent of their money).

Sensing a change in the landscape, Europe’s six biggest oil and gas companies abandoned their fossil fuel common front with coal, and threw the black rock and its shareholders under the bus. Re-branding themselves as “almost gas” companies (shades of John Brown and BP’s “Beyond Petroleum” phase) Shell, BP, Total, Eni and British Gas called on the international community to levy a global carbon tax that would drive electricity generators from coal to gas.

This is exciting news for climate. But there are signs that this climate and energy revolution is also breaking apart the frozen tectonic plates which have locked American conservatism into an orthodoxy of inaction not just on global warming, but on almost every problem challenging our society.

No longer do all conservatives join Koch, Heartland and Republican Presidential candidates in dismissing conservative engagement with climate solutions. Not only are both libertarians (the new Niskanen Center) and business conservatives (American Enterprise Institute) alike debating the need for conservative solutions like carbon taxes, but the first conservative climate progress mega-donor, Jay Faison has surfaced, pledging to spend $175 million on encouraging his movement to come to grips with atmospheric reality.

Over the past decade—ever since the nascent Tea Party partly seized control of Republican politics, shutting down George W. Bush’s forgotten campaign promise to clean up carbon pollution, rebuffing his immigration reforms, and eventually  thrusting his “compassionate conservatism” into the fiery abyss of conservative heresy—a new Republican orthodoxy locked down the primary fault zone in American politics, where new realities and social change forces collide with conservative political, cultural and economic habits.

The Supreme Court’s “money is speech and corporations are people” jurisprudence weakened the ability of business elites to buffer Tea Party pressures on elected Republicans. Even such routine public business as the reauthorization of infrastructure spending or the Export-Import Banks ground to a halt. Nothing, it seemed, was possible.

Tectonic drift isn’t dangerous when the plates glide and rub against each other, releasing their energy gradually. But when they freeze up, the “thrust fault” that results accumulates energy until it cracks, relieving stored up stress in a few seconds, and creating new landscapes and mountain ranges. And when three moving “oceanic” plates (demography, globalization, and climate) converge on the stationary continental plate of American conservatism, the eventual outcome, while unpredictable, is certain to be spectacular.

The crack-up has begun—and surprisingly it seems that climate, not Hispanic voting blocks or global competition, may be the disrupter that shatters conservative orthodoxy.

Carl Pope: We Need a New Approach to Trade Diplomacy With Climate Protection at Its Core