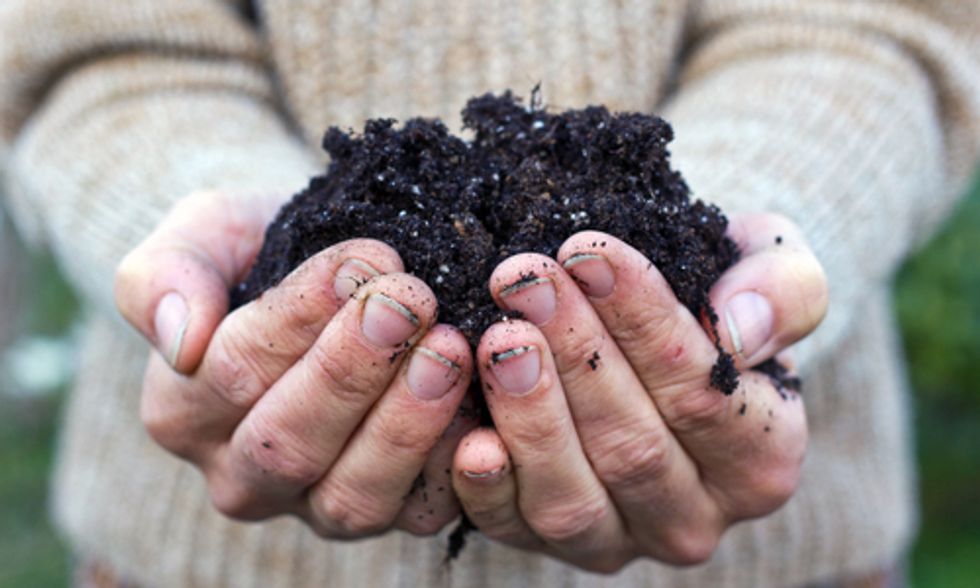 Rodale Institute announced yesterday the launch of a global campaign to generate public awareness of soil's ability to reverse climate change, but only when the health of the soil is maintained through organic regenerative agriculture. The campaign calls for the restructuring of our global food system with the goal of reversing climate change through photosynthesis and biology.

"We could sequester more than 100% of current annual CO2 emissions with a switch to widely available and inexpensive organic management practices, which we term 'regenerative organic agriculture.'"
Photo credit: Shutterstock

The white paper, Regenerative Organic Agriculture and Climate Change: A Down-to-Earth Solution to Global Warming, is the central tool of the campaign. The paper was penned by Rodale Institute, the independent 501(c)(3) nonprofit agricultural research institute widely recognized as the birthplace of the organic movement in the U.S.

The white paper states that "We could sequester more than 100% of current annual CO2 emissions with a switch to widely available and inexpensive organic management practices, which we term 'regenerative organic agriculture.'"

If management of all current cropland shifted to reflect the regenerative model as practiced at the research sites included in the white paper, more than 40 percent of annual emissions could potentially be captured. If, at the same time, all global pasture was managed to a regenerative model, an additional 71 percent could be sequestered. Essentially, passing the 100 percent mark means a drawing down of excess greenhouse gases, resulting in the reversal of the greenhouse effect.

Regenerative organic agriculture is comprised of organic practices including (at a minimum): cover crops, residue mulching, composting and crop rotation. Conservation tillage, while not yet widely used in organic systems, is a regenerative organic practice integral to soil-carbon sequestration. Other biological farming systems that use some of these techniques include ecological, progressive, natural, pro-soil and carbon farming.

"The purpose of our work is singular; we are working to create a massive awakening," said "Coach" Mark Smallwood, executive director of Rodale Institute.

"Our founder, J.I. Rodale, had a vision so ambitious that many people wrote him off at the time. Almost 75 years later, the organic movement is exploding with growth and fierce determination. But the stakes are much higher in 2014. J.I. saw that agriculture was heading in a dangerous direction by way of the wide-spread adoption of the use of synthetic chemicals and the industrialization of farming. He attempted to prevent that transition. We no longer have the luxury of prevention. Now we are in the dire situation of needing a cure, a reversal. We know that correcting agriculture is an answer to climate chaos, and that it hinges on human behavior. The massive awakening itself is the cure. The future is underfoot. It's all about healthy soil."

The Rodale Institute supports its claims by explaining that if sequestration rates attained by the cases cited inside the white paper were achieved on crop and pastureland across the globe, regenerative agriculture could sequester more than our current annual carbon dioxide emissions. Even if modest assumptions about soil's carbon sequestration potential are made, regenerative agriculture can easily keep annual emissions to within the desirable range necessary if we are to have a good chance of limiting warming to 1.5°C by 2020.

"The white paper is to encourage new research, new policy and the rapid expansion of regenerative agricultural methods," said Smallwood.

"The media campaign brings the broader vision to the public much faster. The idea is to stoke the public outcry that already exists and to validate those who demand these changes be made now. By engaging the public now, they build the pressure necessary to prevent this call to action from sitting on the desks of scientists and policy-makers, or worse yet, being buried by businesspeople from the chemical industry. We don't have time to be polite about it."

Below are three excerpts exemplifying the call to action set forth in the white paper:

Since its founding in 1947 by J.I. Rodale, the Rodale Institute has been committed to groundbreaking research in organic agriculture, advocating for policies that support farmers, and educating people about how organic is the safest, healthiest option for people and the planet. The Rodale Institute is home to the Farming Systems Trial, America’s longest-running side-by-side comparison of chemical and organic agriculture. Consistent results from the study have shown that organic yields match or surpass those of conventional farming. In years of drought, organic corn yields are about 30 percent higher. This year, 2013, marks the 33rd year of the trial. New areas of study at the Rodale Institute include rates of carbon sequestration in chemical versus organic plots, new techniques for weed suppression and organic livestock.

6 Spring Foods to Buy at the Farmers Market