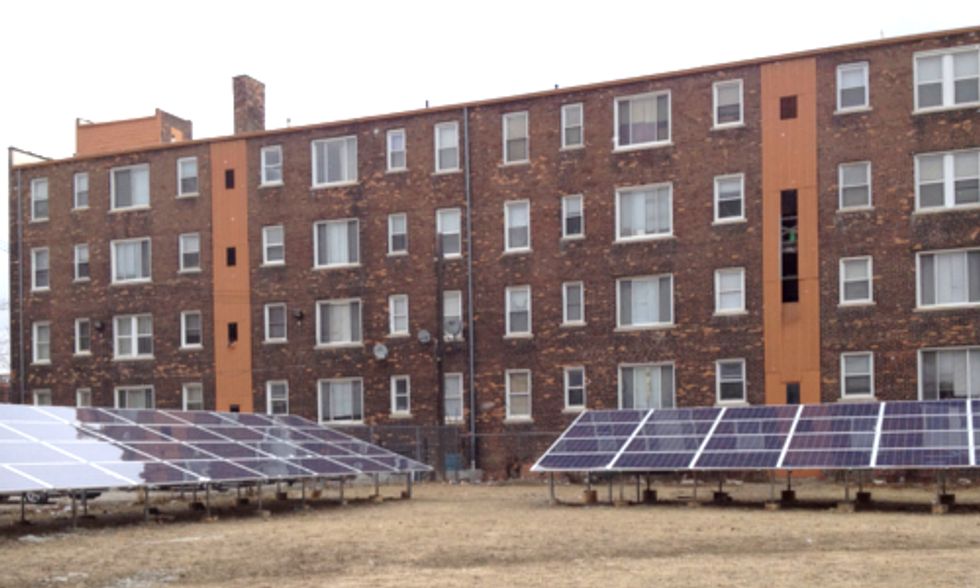 With Gov. Rick Snyder’s recent announcement of clean energy goals for Michigan, the conversation is quickly developing around the future role of renewable energy in the state. To help inform that conversation, a newly released analysis by my Union of Concerned Scientists colleagues and me found that Michigan can triple its use of renewable energy—from 10 percent in 2015 to 33 percent in 2030—at virtually no cost to consumers. Here’s how.

Michigan’s current renewable electricity standard (RES)—which requires utilities to meet 10 percent of the state’s electricity demand with renewable energy resources by 2015 — is a success, but it’s about to level off unless additional policies are put in place to extend it.

Michigan utilities are well on their way towards meeting the full standard, and a discussion has been underway for more than a year about what should come next. That discussion produced a wealth of information about how renewable energy is working right now for Michigan and how there’s potential to do more.

So we decided to take a deeper dive into the data and paint a clearer picture of what Michigan’s energy future might look like if it strengthens its commitment to developing renewable energy resources. Using the Regional Energy Deployment System model developed by the National Renewable Energy Laboratory, we examined the impacts on consumers, the economy, and the environment of three potential scenarios for meeting Michigan’s future electricity demand:

Our findings show that Michigan can affordably meet 32.5 percent of its electricity needs with in-state renewable energy resources by 2030 while maintaining reliability in the electricity system. Doing so will spur billions of dollars of investment in Michigan, cut electricity sector carbon dioxide emissions, and reduce the risks to consumers of an over-reliance on coal or natural gas.

What’s even better is that developing Michigan’s renewable energy resources can be done with virtually no increase in electricity costs over the next 15 years. Ramping up renewable energy to meet 32.5 percent of demand in 2030 adds just 0.3 percent to the cost of meeting Michigan’s electricity demand from 2014 to 2030. In some years, average retail electricity prices are actually lower under a 32.5 percent RES scenario. Pursuing a less robust RES, 17.5 percent by 2020, significantly reduces the economic, public health, and environmental benefits without reducing the costs.

According to our analysis, establishing a 32.5 percent by 2030 RES in Michigan means:

A look at renewable energy in Michigan, comparing business as usual versus a 32.5 percent by 2030 RES. Graphic credit: Union of Concerned Scientists

Economic Investments in Michigan Under a 32.5 Percent by 2030 RES

Under a 32.5 percent by 2030 RES, more than $9.5 billion is invested in building nearly 9,400 MW of new renewable energy capacity. Annual operation and maintenance needs garner another $567 million in local spending in 2030. Graphic credit: Union of Concerned Scientists

It’s time for Michigan to increase its commitment to renewable energy by extending and strengthening its renewable electricity standard.

Michigan has vast in-state renewable energy resources—more than enough to meet the state’s 2012 electricity demand several times over. These resources remain largely untapped today as the state continues to rely heavily on its aging and inefficient coal fleet to generate electricity. This overreliance on fossil fuels generates substantial air pollution and carbon emissions, and takes a significant toll on public health, the state’s economy, and the climate. Renewable energy offers an electricity resource that is reliable, affordable, adaptable, and protective of the environment—all goals that Gov. Snyder has laid out for the state’s electricity sector.

Our analysis builds on a growing list of resources showing how renewable energy is working for Michigan right now and how it can continue to provide economic, public health, and environmental benefits for the state. With Michigan’s current RES set to level off in 2015, Gov. Snyder and the Michigan legislature should work toward passing an RES policy for Michigan that includes achieving at least 30 percent renewable energy by 2030. Delaying legislative action only means delaying a cleaner, more reliable, more economically beneficial energy future for Michigan.