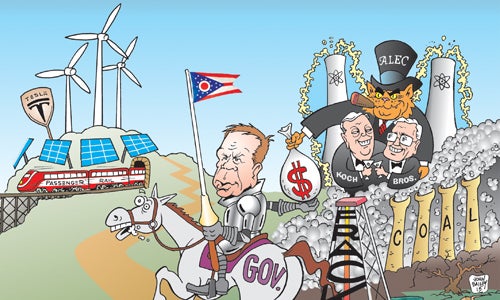 Back in early 2010 Ohio stood at the cusp of a modern 21st century technological revolution.

It had won a new federal-funded rail line to finally re-join Cleveland, Columbus, Dayton and Cincinnati.

Tesla electric sales networks were moving into the state, bringing full player status in the spread of the world’s most advanced automobiles. 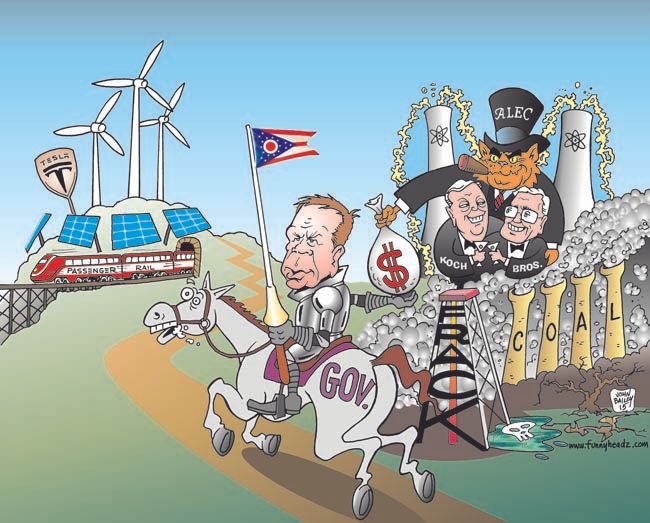 And we had adopted a forward-looking green energy package poised to bring billions of new investments along with thousands of new jobs.

Then the 19th century re-took control.

Today Ohio’s fossil-fueled, landlocked capital city is the western world’s largest with neither internal commuter light rail nor access by passenger train service from anywhere else.

After trying to ban them altogether, Ohio has strictly limited sales of advanced electric Tesla cars.

And after being at the cusp of major solar and wind power advances, the state has all but killed the prospects for any large new green energy projects. The state may now miss one of history’s biggest and most profitable technological transformations.

Meanwhile Ohio’s three largest electric power utilities are demanding billions from the PUCO in bail-outs for obsolete fossil and nuke burners that are fast being abandoned elsewhere around the world. If that money goes for these relic generators, investment in advanced energy in the state will disappear, and Ohio’s fossil/nuke dinosaurs will give new meaning to the terms rust belt, global warmers and technological bankruptcy.

With the coming of John Kasich in 2011, $400 million in federal grants won by decades of hard grassroots efforts to restore north-south passenger rail service were flung back at Washington with a nasty note. With neither public hearings nor open debate, Kasich made clear his contempt for those who worked decades to re-connect central Ohio by rail to the rest of the world.

There have been no passenger trains in or out of Columbus since 1979. But the prospect of score of jobs restoring and maintaining the lines meant an enhanced future for the cities being reconnected and the towns along the route.

It was unclear how many Ohioans would regularly commute between the state’s major cities. But both Cleveland and Cincinnati are tied to the Amtrak network, and the connectors to Columbus and Dayton would mean travelers could come here by rail from all over the country.

Now they can’t. The development money and jobs are gone. Columbus and Dayton remain isolated backwaters.  Their prospects for future large-scale conventions etc. are diminished. The money went to Florida, whose Governor Rick Scott is generally to the right of Kasich. What once would’ve connected the 3C’s now helps you get from Tampa to Orlando.

Ohio lawmakers have also assaulted the electric car. These self-proclaimed defenders of the “free market” came to the defense of auto dealers who fund them by worrying that Teslas would have an “unfair advantage” because their internet sales operations would not provide similar service being given gas-fired cars.

But electric cars have far fewer moving parts and can be much more easily maintained than the old fossil burners.  They are, in short, the automobiles of the future … just not in Ohio.

Tesla did get permits for a couple of showrooms in the state (there’s one at Easton).

But to celebrate the retrograde triumphs over the train and Tesla, the state has dumped billions into instantly obsolete freeway upgrades which do not come with electric charging stations.

The biggest turn back to the 19th century has come with the murder of Ohio’s green energy program. With great effort and almost total bi-partisan unity, Ohio in 2008 adopted a wide-ranging program to encourage the development of wind and solar within the state.

Northern Ohio is especially good for large-scale wind farms. The lake breezes are strong, the region is flat and the sites are in ag land close to big urban areas where rates are high.

Billions of dollars poised for willing communities like Leipzic promised jobs and business.

But while Germany, California and other post-industrial competitors surge ahead into a green-powered world, Ohio has gone in reverse.

With absolutely no possible health, safety or ecological reason, Kasich slipped into law a restriction on turbine tower siting that renders the future of wind power in Ohio virtually nil, costing billions in investment and countless jobs. The destabilization of tax, subsidy and regulatory programs has done the same to large-scale solar projects, one of which has already been cancelled south of Columbus.

Overall, a corporate-owned regime has relegated Ohio to pre-green museum status. No region dependent on fossil and nuclear fuels can look forward to any kind of reliable, long-term transition into the 21st century global economy.

Solar, wind, electric cars, passenger rail service and the other high-tech industries are the future of post-industrial prosperity. They’re at the core of a green-powered revolution in energy supply that is redefining how the world does business.

Just not in Ohio.

This article will appear in the Columbus Free Press.

Fukushima Radiation Found in Sample of Green Tea from Japan