How Much Sodium Is Too Much? 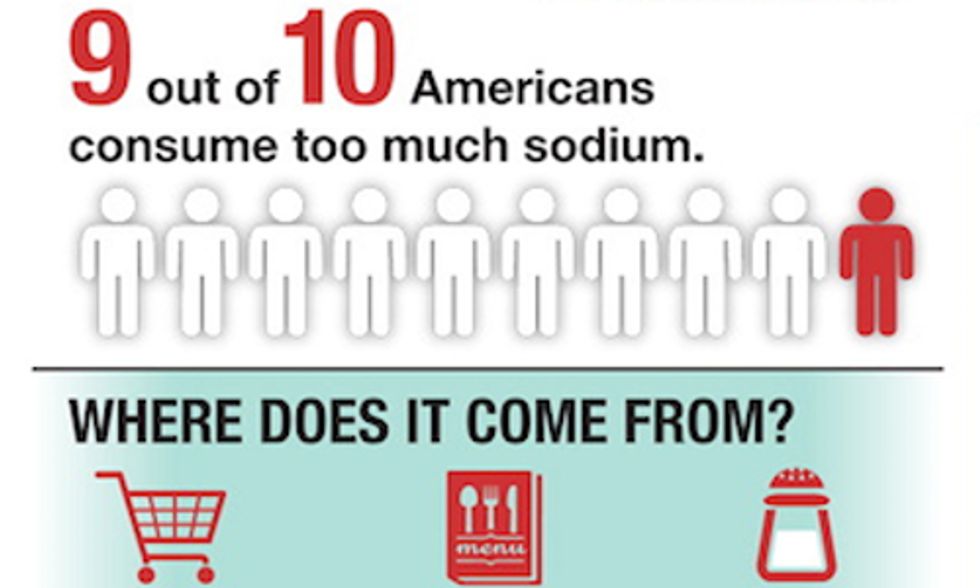 While you might hear the words salt and sodium used interchangeably, there is a difference between the two. Salt is a combination of two minerals, sodium (40 percent) and chloride.

In a recent post highlighting seven foods that experts once said were bad that turned out to be healthy, we are reminded that sodium is, in fact, essential to health. It is necessary for good digestion, it supports thyroid function, controls muscle and nerve function, regulates water balance and helps metabolize food. Unrefined salt like raw sea salt can contain dozens of trace minerals. In fact, salt was once so valuable that it was literally used as currency.

Reaching for the salt shaker for another shake? Might not be a bad idea? Well first consider this:

Think that your sodium intake is low because you don’t add a lot of salt when you cook? Well sodium is hidden in lots of foods. While it might not be news to you that a fast food sandwich can easily contain more than 100 percent of the sodium you need in a day, it might surprise you to find out the top 10 sources of sodium in the diet. In fact, 44 percent of the sodium we eat comes from just these 10 types of food.

According to the Centers for Disease Control and Prevention (CDC), the top sources of sodium in the diet include:

In addition, sodium is included in one’s diet in surprising ways. For instance, most store-bought raw chicken and pork has been injected with a sodium solution to add weight and moisture. Think that’s odd? It’s a fact. But check out these 7 salty myths:

So, what’s the right amount?

The CDC offers current dietary guidelines for American adults in which less than 2,300 mg of sodium is consumed per day.

However, the CDC adds, if you are in the following population groups, you should consume no more than 1,500 mg of sodium per day:

Four years ago, the American Heart Association (AHA) lowered its suggested daily sodium intake from 2,300 mg a day to less than 1,500 mg a day. With this reduction, the AHA estimates a savings of more than $426 billion in healthcare costs and a 25.6 percent decrease in high blood pressure across the population.

As far as a sodium deficiency, it’s rare. Only people involved in vigorous exercise in hot environments need to be concerned about replacing sodium lost through perspiration.

Need some pointers, hints and tricks to track, monitor or reduce your sodium intake?

How much sodium is in salt?

Change your salty ways in 21 days

That last point, choosing foods high in potassium, is important. The CDC also encourages the consumption of potassium-rich foods, such as fruits and vegetables. Dr. Oz contributor Daniel Heller, ND, reinforces that eating more potassium is just as important as reducing sodium:

The two minerals are like the two sides of a seesaw, or like yin and yang. They balance each other out. Many of the negative effects of excess sodium can also be traced to insufficient potassium. While cutting back on sodium chloride, we should also be eating more fruits and vegetables, which are rich sources of potassium bicarbonate.