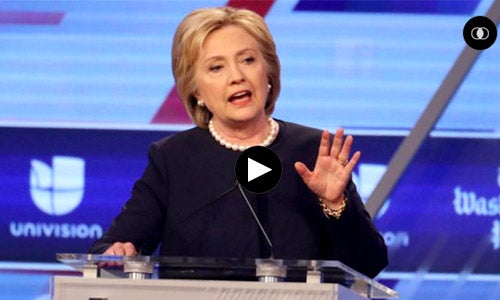 According to a new report by Greenpeace, Hillary Clinton’s presidential campaign and the super PAC supporting her have received $138,400 from fossil fuel lobbyists and $1,327,210 from bundlers, totaling more than $4.5 million from lobbyists, bundlers and large donors connected the fossil fuel industry. Clinton maintains that she’s received only about $330,000 from individuals who work for fossil fuel companies—about 0.2 percent of the total raised by her campaign.

We speak with Charlie Cray, research specialist for Greenpeace and lead researcher on the fossil fuel lobbyists’ contributions to the Clinton campaign, as well as Eva Resnick-Day, a democracy organizer for Greenpeace who confronted Clinton at a rally.

With the Wisconsin primary just a day away, Democratic presidential challengers Hillary Clinton and Bernie Sanders sparred over the weekend over whether fossil fuel lobbyists are funding Clinton’s campaign. The dispute took center stage after video emerged of Greenpeace activist Eva Resnick-Day questioning Clinton at a campaign rally at the State University of New York in Purchase on Thursday. Resnick-Day has been working on a Greenpeace campaign to get candidates to take a pledge rejecting future donations from oil, gas and coal lobbyists, and executives.

“These lobbyists are people whose job it is to make connections with Senator Clinton to influence her policy going forward. And giving her money in the campaign, they’re clearly trying to find influence,” says Resnick-Day. “I don’t think that that is how democracy should work.”

We speak with Resnick-Day, the democracy organizer for Greenpeace who confronted Clinton.

Is the Tar Sands Boom About to Go Bust?