How Much Do Corporations Benefit from Food Stamps? 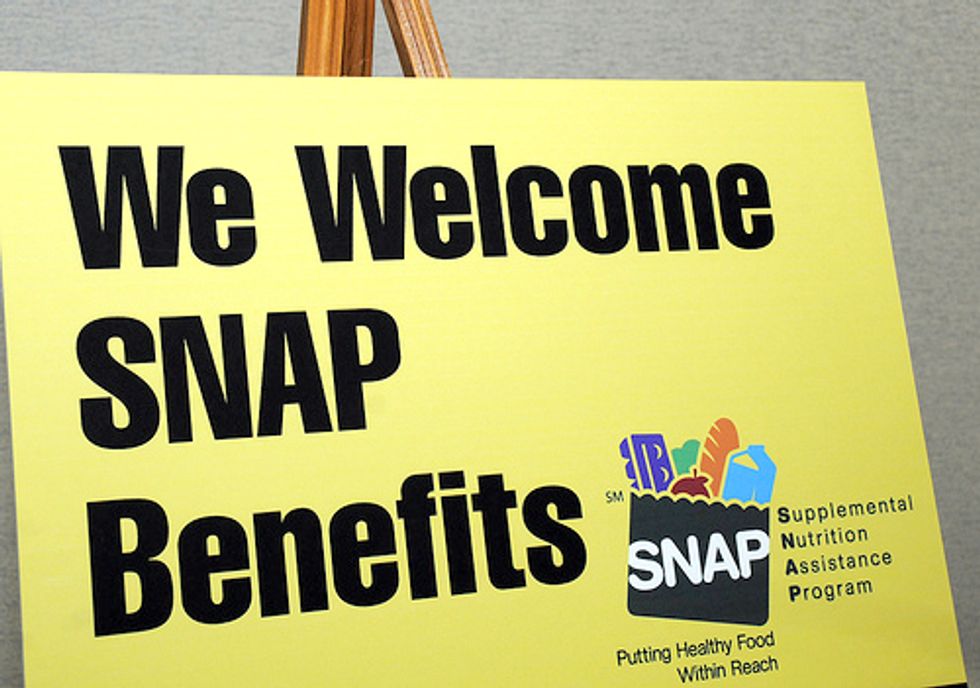 As Congress proposes cuts to hungry families, my new report raises questions about how much food makers, retailers and big banks profit from food stamps.

With the debate over the 2012 Farm Bill currently underway in the Senate, most of the media’s attention has been focused on how direct payments—subsidies doled out regardless of actual farming—are being replaced with crop insurance, in a classic shell game that Big Ag’s powerful lobby is likely to pull off.

Meanwhile, the Senate may hurt the less powerful by cutting $4.5 billion from the largest piece of the farm bill pie: the Supplemental Nutrition Assistance Program (SNAP, formerly called food stamps). Reducing this lifeline for 46 million struggling Americans (more than 1 in 7—nearly half of them children) has become a sideshow in the farm bill circus, even though SNAP spending grew to $78 billion in 2011, and is projected to go higher if the economy does not improve.

While New York Sen. Kristen Gillibrand’s amendment to restore cuts to SNAP by reducing insurance payments is a noble effort, what’s missing from this conversation is the role of corporations. Much attention has focused on how agricultural subsidies fuel our cheap, unhealthy food supply. In reality, the largest and most overlooked taxpayer subsidy to Big Food in the farm bill is SNAP, which now represents more than ten percent of all grocery spending.

In a report I released today—Food Stamps, Follow the Money: Are Corporations Profiting From Hungry Americans?—I examine the role of three powerful industry sectors that benefit from SNAP:

Most details about where SNAP dollars go remains hidden. For example, although such data is readily available, the U.S. Department of Agriculture (USDA) (which administers food assistance) refuses to make public how much money individual retailers make from SNAP. In addition, Congress does not require data collection on specific SNAP product purchases (such as Coke versus Tropicana), despite such information being critical to effective evaluation of the program.

USDA also does not collect national data on how much money banks make on SNAP. States bear much of the burden of these administrative costs. Are lucrative contracts with private banks the most cost-effective way to administer a critical food assistance program at a time of severe budget cuts? Could we feed more hungry Americans with some of the profits these corporations are making?

Anthony Smukall is a SNAP participant living in Buffalo, New York, where he says his fellow residents are “facing cuts year after year, with no sustainable jobs to be able to get off of programs such as SNAP.” He thinks that “transparency should be mandatory. The people have a right to know where our money is going, plain and simple.” He added: “J.P. Morgan is shaking state pockets, which then rolls down to every tax-paying citizen. I am disgusted with the numbers in this report, it is unimaginable. If the people knew how such programs were run, and how money is taken in by some of the world’s conglomerates, there would be outrage on a grand scale.”

Jennifer L. of Massachusetts is a single mother who recently re-entered the workforce and hopes Congress does not cut SNAP because as she explains: “SNAP makes a huge difference in my ability to support my children and pay the bills. Food prices have been skyrocketing while salaries remain unchanged. Many people I know have two jobs to try to make ends meet.” She added: “I am in favor of making retailers’ and banks’ information regarding SNAP public. What are they hiding?”

Instead of hurting families during these hard times with cuts to SNAP, Congress should require program improvements that would restore its original purpose: providing a safety net for those in need while also helping farmers. Congress should also make SNAP more transparent by mandating accurate tracking of SNAP expenditures. Why should only the likes of Walmart and Coca-Cola know how billions of our tax dollars are spent each year? Is SNAP truly “putting healthy food within reach” as its tagline proclaims?

You can download the full report by clicking here.