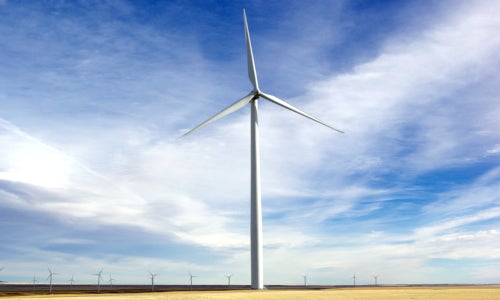 Montana appears to be sitting on a state full of potential when it comes to renewable energy.

The American Wind Energy Association ranked Montana third in the country in wind resources, but its position falls to 20th and 21st in number of wind turbines and installed capacity, respectively. The Solar Energy Industries Association’s national database map shows a handful of solar manufacturers, installers and contractors—an amount that beats out few states aside from its neighbors North and South Dakota.

If the state continues lagging in clean energy deployment, it could miss out on a stronger employment base. According to a new study from Synapse Energy Economics, prepared for the Montana Environmental Information Center and Sierra Club, Montana could supply more than 4,000 renewable energy jobs by 2030. It’s the first report of its kind for Montana.

“This report shows us that by investing in energy efficiency upgrades, solar and wind generation, we can create strong, family-wage careers for Montanans,” said Marty Wilde, CEO and principal engineer at WINData LLC. “Our local potential is vast: We have some of the nation’s best wind resources. Montana can use its own sustainable natural resources such as wind to create in-state jobs and build businesses.

“It’s time for Montana to further invest in and expand our renewable energy sectors.”

According to the report, small commercial and residential solar power creates the largest job impact per average megawatt with 9.2 jobs per year, followed by large-scale industrial photovoltaics (PV), energy efficiency installations and wind energy. Energy efficiency creates the most jobs for every dollar invested at the installation stage, good for a rate of 11 job-years per $1 million of investment.

“It is important that development of Montana’s wind and energy resources moves forward,” said Ben Basom, a spokesman for the Pacific Northwest Regional Council of Carpenters. “Not only will we create hundreds of family wage careers for Montanans during construction, but we will also create many more sustaining indirect jobs as a result. We invest a lot of resources to produce the highest-skilled and most productive workforce in the industry – we have that workforce in Montana, ready to get started.”

Montana was one of several states in which a legislator tried to pass an American Legislative Exchange Council-sponsored standard last year to curtail the growth of renewable energy. In the case of State Sen. Debby Barrett (R-Dillion), Senate Bill 31 would have altered the definition of a renewable energy project and the type of project that would qualify for benefits.

Additionally, Environment America listed Billings as a “solar beginner” in its list of “shining cities” at the forefront of a solar revolution. The new study from the Sierra Club and Montana Environmental Information Center suggests that more is possible.

“This report confirms that Montana is ideally positioned to be a clean energy leader nationally and in our region,” said Jack Isbell, a solar installer with Solar Montana in Helena. “We’ve already seen rapid industry growth as more Montanans install solar on their homes and businesses.

“In the next 20 years, the growth of clean energy will only continue. Investing in more clean energy resources will create sustainable careers for Montanans that will bolster our economy, fulfill the demand for clean energy from consumers in neighboring states and meet the newly proposed federal carbon pollution standards.”