How Monsanto Gained Huge Control of the World's Food Supply 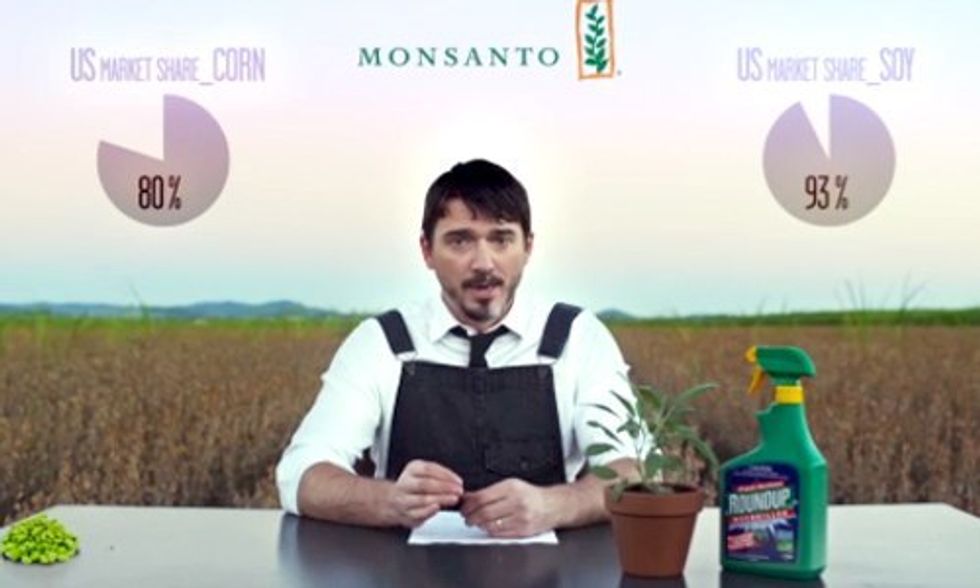 The Undercurrent, an online news site that bills itself as the antidote to the mainstream media's five-second soundbite, made a five-minute video explaining how Monsanto came to have such a huge control over our food system. In this clever, satirical video, Dan Graetz of The Undercurrent explains that "nothing kills those bloody weeds better than Roundup from Monsanto—the famous makers of Joni Mitchell's favorite DDT, Agent Orange, which, aside from the occasional birth defect did a great job of destroying the rice fields during the Vietnam War, the cow-swelling bovine growth hormone and PCBs, everyone's favorite carcinogenic environmental pollutant."

"But with the revolutionary key ingredient in Roundup glyphosate, the folks at Monsanto have added not just enormous profits to their bottom line, but also the word 'probably' in front of the word 'carcinogenic,'" says Graetz. He's referring to the World Health Organization's (WHO) recent report which found that glyphosate is "probably carcinogenic," which Monsanto vehemently demanded the WHO retract.

Just how much power does Monsanto wield? Well, they control 80 percent of the U.S. corn market and 93 percent of the U.S. soy market, according to Graetz. So, it comes as no surprise that the National Corn Growers Association and the American Soybean Association are going to bat for them. These two trade organizations issued a statement last week that they are worried the WHO review of glyphosate and its soon-to-be released review of 2,4-D might create “confusion” about two weed killers that have been “mainstays for farmers for decades.”

At this point you might be wondering "how is this allowed to happen? How are farmers okay with this?" Two things real quick: market forces and political influence. Now, I know what your thinking: "Big Business controls politics. Tell us something we don't know." But the example I am about to give you is an absolute doozy.

Watch to find out: