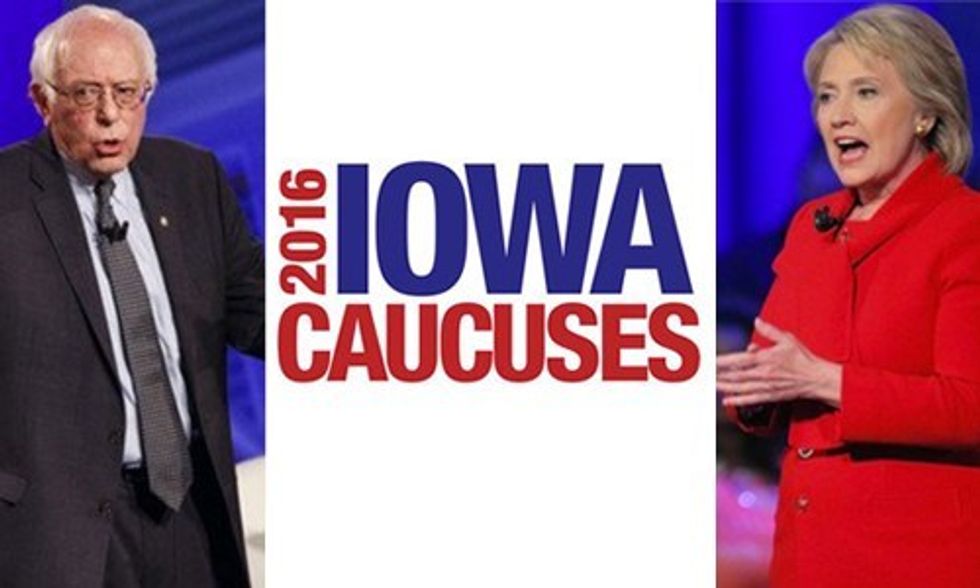 The road to my caucus location in Iowa on Monday will wind along an Iowa River valley littered with the reminders of record flooding and drought since the last election—and a sea change on voters' priorities on climate action since 2008.

Climate change, like the candidates' climate action plans, may have received scant attention in the presidential debates and media.

But in Iowa, a state that leads in wind energy production and faces severe economic and agricultural risks from extreme weather, Bernie Sanders' bold climate action plan and long-time track record to take on the fossil fuel lobby is uniting a new generation of Iowa farmers and clean energy entrepreneurs, inspiring a groundswell of student activism, and tapping into the real and urgent climate leadership emerging in cities like Des Moines, Dubuque and Iowa City.

As the only candidate standing up to the Bakken pipeline, fracking and the fossil fuel lobby, and laying out a plan for farmers and displaced workers to be part of a clean energy revolution, Sanders is not just Iowa's climate champion.

A Sanders victory in Iowa next Monday could place the urgency of climate action back to the forefront of national debate—and electrify a new coalition of clean energy voters across the country.

All Democrats, of course, have touted their clean energy and climate action bona fides. But there is a huge divide between Hillary Clinton's and Martin O'Malley's notable renewable energy plans, and Sanders' long-time track record of standing up to the fossil fuel lobby and calling for an end to huge fossil fuel subsidies, as well as extraction on public lands.

The controversy of the Bakken pipeline for Iowans, as seen in this ad, highlights Sanders' leadership:

As part of his plans to cut carbon pollution by 40 percent by 2030, Sanders—unlike Clinton—calls for a carbon tax on polluters, in order to "return billions of dollars to working families to ensure the fossil fuel companies don't subject Americans to unfair rate hikes" and "protect low-income and minority communities that are most impacted by the transformation of our energy system and protect the most vulnerable communities in the country suffering the ravages of climate change."

As rural Iowans hold off devastating frac sand mining operations in the northern part of the state, Sanders is the only candidate to campaign against hydraulic fracking and liquefied natural gas exports.

"The fossil fuel industry spends billions and billions of dollars lobbying and buying candidates to block virtually all progress on climate change. At the national level where companies have to report what they spend on lobbying and campaign contributions, the oil companies, coal companies and electric utilities spent a staggering $2.26 billion in federal lobbying since 2009 and another $330 million in federal campaign contributions."

Sanders stands alone in defiance of the stranglehold of the fossil fuel lobby in Washington, and in the Democratic Party.

In this respect, an Iowa victory for Sanders will determine any real debate and progress on climate action and a clean energy revolution in the future.