How High Will Sea Levels Rise? 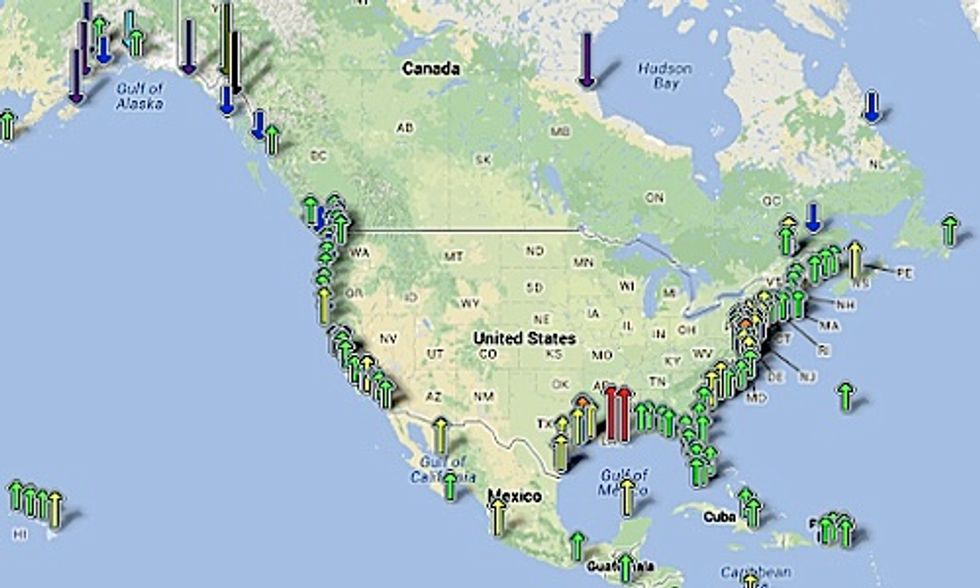 Answering the question of “how high will seas rise” is tricky. Perhaps the best response is “it depends.” There are many factors that interact in complex ways that will help determine future sea level rise. But fortunately, there are scientists much smarter than I who have done the legwork and presented their findings through scientific journals and major reports in the past few years. Let’s go through some of the major findings that are relevant to finding how much sea level rise we should expect in the coastal Southeast.

Louisiana road washed out after Hurricane Isaac in 2012. Sea level rise is making storm surges higher and causing more erosion up and down the Southeast coasts. Photo credit: LA1 Coalition

Projections As Ranges Due to Variables

Sea level rise projections are almost exclusively expressed as ranges, rather than a single number. Since there are variables that are either unknown at the present time or difficult to model, it would almost certainly be inaccurate to give a single, firm number as a prediction of sea level rise by a given date. Estimates are therefore given as a range of numbers to express the uncertainty.

Three of the primary variables that affect the accuracy of sea level rise projections are:

What Are the Projected Ranges of Sea Level Rise?

To help get an idea of how much sea level rise we in the coastal Southeast should expect, let’s walk through a few of the most significant recent estimates and then discuss how  to consider these projections for local use.

It’s important to note here that when interpreting measures of sea level rise, one vertical foot doesn’t equal one horizontal foot. Given the shallow slope of land in the Southeast, one vertical foot of sea level rise could cause flooding or erosion of approximately 100—200 feet inland in South Carolina and as much as 1,000 feet inland in Florida. It follows that a similar proportional relationship could be displayed from a rise of anywhere from a few inches to a few feet.

As part of the U.S. National Climate Assessment process, the National Oceanic and Atmospheric Administration (NOAA) released a report last December, with the best available data to inform U.S. climate policy. Their findings:

This range of projected sea level rise (8 inch—6.6 feet by 2100) is similar to other studies that have been performed on the matter. The chart above shows a comparison of some of the more recent and significant projections of global sea level. They tend to be within the 8 inch—6.6 foot range. It’s important to note, however, that some of the difference between the projections is due to using different baseline years, different planning horizons (i.e. by 2050, 2060, 2100), and also varying modeling methodologies.

Of course if you are wondering which sea level rise projection to use to help you inform decisions regarding the future, it can be a tough process. Southeast Florida yields a precedent that is valuable for other coastal communities, struggling with this issue. As part of the work of the Southeast Florida Regional Climate Change Compact, the four participating counties drew up a “Unified Sea Level Rise Projection” to use for planning purposes. They ended up using the guidance numbers from the Army Corps of Engineers for their sea level rise planning.

The Intergovernmental Panel on Climate Change (IPCC), widely regarded as the most influential group of climate change experts in the world, just released an updated report on sea level rise projections as part of their fifth climate assessment report (AR5). It was interesting to see that the updated report upped the projections for future sea level rise in the wake of their last report receiving much criticism for low-balling sea level rise estimates. The new report is still considered by many scientists and observers to be biased on the low side due to the way it is modeled and the reported conservative nature of the organization’s projections.

Global vs. Local Sea Level Rise and Implications for the Southeast

The phenomenon of local relative sea level rise (RSLR) is perhaps best illuminated by the example of the Gulf coast, where the rate of land subsidence, or how fast the land is sinking, has been measured at about 10 millimeters per year over the last 60 years. Compare that to Key West, which has averaged about 2.24 mm rise per year (and has demonstrated very little land subsidence), or Charleston, which has averaged about 3.15 mm rise per year. At this rate, some Gulf coast areas need to plan for an absolute minimum of three feet of sea level rise by 2100, and realistically should be planning for more than six feet.

Putting these two examples of local sea level rise together paints a very concerning picture for the future of the coastal Southeast. On top of the global mean sea level rise estimated in the previously mentioned reports, some parts of the Southeast will also have to plan for a significant amount of extra rise from unique oceanographic factors or extra relative rise from extreme land subsidence.

How to Plan for Sea Level Rise Given Uncertainties

Given that local sea level rise may differ significantly from global averages that are projected for the future, the Southeast region needs a greater understanding of where the localized effects on sea level rise are and what is causing them. Local universities can prove invaluable for studying these local effects and they should be supported accordingly.

As was mentioned toward the beginning of this post, while some of the uncertainty of how much sea levels will rise in the future is due to limits of modeling, a large portion of the uncertainty is based on how much we continue to pollute. Cutting our carbon pollution soon won’t stop sea level rise from happening in the near term, but it will slow it over the long term. For this reason, I consider it critical that this variable be given careful consideration by anyone trying to plan for sea level rise. The good news is that to some degree, we are in the drivers seat and we have some amount of deciding power whether or not we will choose a course that takes us to the high end of the projections or the low end.