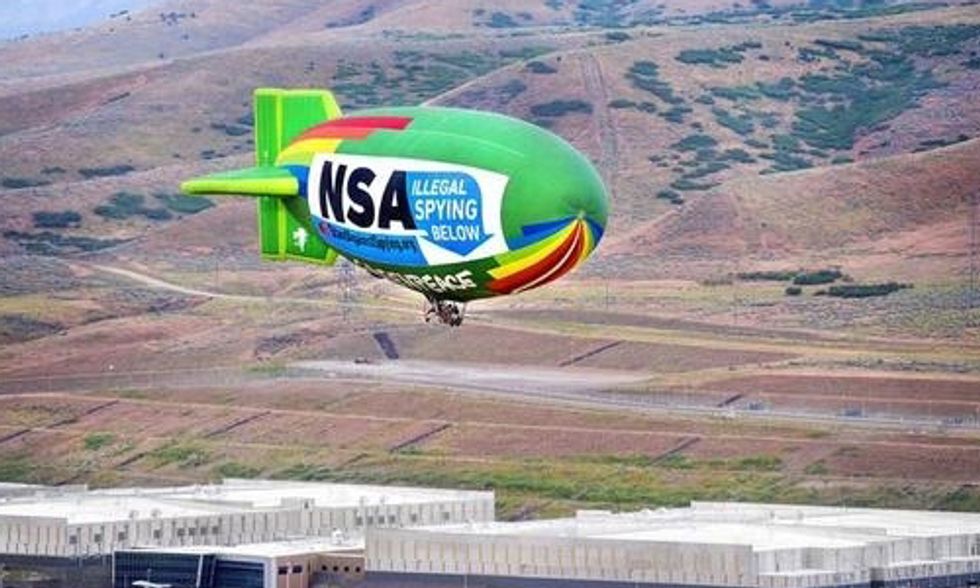 Unless you’ve been living in a hole in the ground or in a galaxy far, far away you won’t have missed media revelations about government security services snooping on our every communication.

Governments rely on electronic communication to exchange their most intimate secrets and that includes their negotiating positions in international talks, such as those on climate change. Photo credit: Douglas Pizac / Greenpeace

Personal phone calls and e-mails are among the data routinely scooped up and stored for possible later scrutiny. It makes a mockery of the notion of personal privacy.

As private citizens we express, or suppress, our outrage and get on with our day-to-day lives. We call, text and mail our nearest and dearest with our most intimate secrets. In the back of our minds we hope that "someone" is there to prevent the descent into an Orwellian dystopia. Or we ignore it and reckon it doesn’t affect us.

When individuals snoop, it’s called ‘hacking’ and they are pursued to the ends of the Earth. When governments do it, it’s "surveillance" and they get off Scot-free.

Governments, too, rely on electronic communication to exchange their most intimate secrets and that includes their negotiating positions in international talks, such as those on climate change.

Decisions about cutting carbon pollution are serious business and impact on trillions of dollars of present and future investments. And vested interests have the upper hand if they know the positions of their opponents.

What’s the most likely outcome of a card game where your hand is on the table while other players hold their cards close to their chests?

The odds are already stacked against developing countries that face the brunt of climate change impacts. Their disadvantage in protecting themselves against the ‘dark arts’ of electronic eavesdropping makes them even more vulnerable.

Big Brother has been watching all along. For all we know, the outcome of the UN climate talks opening in Lima, on Dec. 1, may already have been compromised.

In an article, “For the NSA, espionage was a means to strengthen the US position in climate negotiations,” the Danish publication Information raised the question as to whether electronic surveillance by the U.S. National Security Agency (NSA) contributed to the failure of the Copenhagen climate summit, in 2009.

The summit was billed as the moment when the world’s nations would reach agreement on achieving significant cuts in carbon pollution. As Information put it, some called the summit the most important of its kind since the end of World War II. More than a hundred government leaders participated. Never before had so many heads of state been gathered outside the UN headquarters in New York.

According to the article, the Danish climate minister and her staff took special care to keep track of every paper copy of a Danish draft proposal. If handed out, each copy was collected again at the end of the meetings.

But this was before Edward Snowden, the former NSA contractor, blew the whistle on all-pervasive electronic snooping. Back in 2009, no security precautions were taken to protect the Danish document in electronic form.

An accompanying article, "NSA spied against UN climate negotiations," cited a leaked document reporting that the U.S. NSA, along with its close partners from intelligence agencies in Australia, Canada, New Zealand and the UK—the so-called Five Eyes—“will continue to provide policymakers with unique, timely, and valuable insights into key countries' preparations and goals for the conference, as well as the deliberations within countries on climate change policies and negotiation strategies”.

It appears that at an early stage in the Copenhagen process, the NSA had intercepted information about the position that the Danish government—the host of the conference—had as its bottom line. If so, this would be crucial intelligence. The US government would know that it didn’t need to shift its position—if they held out, the rest of the world would come to them.

A further article by ‘Information’, “Legal experts: Illegal to spy on Denmark and the UN”, referred to the view of legal experts that, "It would constitute a violation of both Danish laws and international conventions if the U.S. National Security Agency (NSA) spied against Denmark and the UN climate summit COP15 in Copenhagen in December 2009".

Not only the NSA

The NSA is not alone in its spying effort. In an article published on Nov. 1, Information reported, “The British intelligence service GCHQ has spied systematically against international climate change summits”.

The article says that a “February 2011 PowerPoint presentation lists the annual UN COP summits from 2007 to 2010 as targets of GCHQ espionage, including Copenhagen's COP15 in December 2009, although it is not clear if the service spied on COP14 in Poland in 2008. According to the presentation, GCHQ was also deployed against the Major Economies Forum on Energy and Climate Change (MEF), a meeting for the world's top economies which took place in Paris in the spring of 2009 as a part of the preparations for the summit in Copenhagen later that year”.

Another article by Information, “Disguised as Climate Negotiators,” reports that “climate change became a ‘serious intelligence priority’ for GCHQ in 2007.” It says, “An undercover employee of the Government Communications Headquarters (GCHQ) was embedded in the British delegation when world leaders assembled at the 2010 UN Climate Change Summit in Cancún, Mexico”.

The meeting in Cancún was intended to bring the UN climate negotiations back on track after the historic failure in Copenhagen in 2009. Did you notice a dramatic development from the Cancún meeting? (Just in case I’d missed something).

UN territory and talks must be off-limits to snooping

Negotiations under the UN banner are meant to allow every country to have its say.

More than that, the venues of all UN climate summits are declared to be UN territory for the duration of the negotiations, so the snoopers could have been breaking international law.

UN Secretary General, Ban Ki-moon, said he’s launching an investigation into reports that Britain spied on other governments at two successive global climate summits: “All diplomatic information is inviolable. If there has been any breach … they should be investigated. UN information should be protected in its entire confidentiality."

What does it mean for Lima in December 2014?

Governments are giving the UN climate talks another shot in Lima, starting on 1 December—the twentieth time they’ll have met to achieve progress.

It’s easy, and unbelievably frustrating, to say that governments haven’t achieved nearly enough when the science and clean energy solutions are staring them in the face.

Climate change affects us all. The saddest response from negotiators in Lima to the question, “What did you do to stop it?” would be, “I failed to encrypt my communications.”