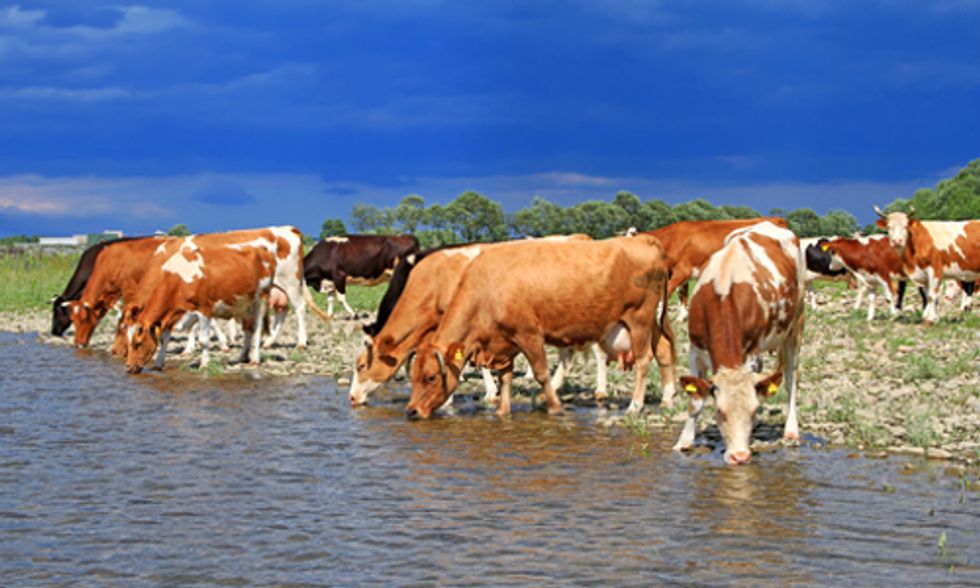 Many people know the issues with fracking when it comes to water and air pollution, but animals are also at risk. Two studies in the last two years, show how farm animals and aquatic life are impacted by fracking.

A study by two Cornell University researchers indicates the process of hydraulic fracturing deep shale to release natural gas may be linked to shortened lifespan and reduced or mutated reproduction in cattle—and maybe humans.

Without knowing exactly what chemicals are being used, and in what quantities, it is difficult to perform laboratory-style experiments on, say lab rats. But farm animals are captive, surrounded by electric and barbed wire fences.

And when fracking wastewater is spilled across their pasture and into their drinking water, and they start dying and birthing dead calves, one can become suspicious that there is a connection.

Which is what the Cornell researchers found during a year-long study of farm animals, based primarily on interviews with animal owners and veterinarians in six states: Colorado, Louisiana, New York, Ohio, Pennsylvania and Texas.

“Animals can nevertheless serve as sentinels for human health impacts,” the report, Impacts of Gas Drilling on Human and Animal Health, notes. “Animals, particularly livestock, remain in a confined area and, in some cases, are continually exposed to an environmental threat.”

The report has been produced by Robert E. Oswald, a biochemist and Professor of Molecular Medicine at Cornell University, and Michelle Bamberger, a veterinarian with a master’s degree in pharmacology.

In one case, an accidental release of fracking fluids into a pasture adjacent to a drilling operation resulted in 17 cows dead within an hour. Exposure to fracking fluids running onto pastures or into streams or wells also reportedly led to pregnant cows producing stillborn calves, goats exhibiting reproductive problems and other farm animals displaying similar problems. Farmers reported effects within one to three days of animals consuming errant fracking wastewater.

“Of the seven cattle farms studied in the most detail, 50 percent of the herd, on average, was affected by death and failure of survivors to breed,” the researchers noted.

Other examples seem to confirm animal health problems after exposure to fracking wastewater. Animals exposed to it have the problems; animals separated from it—most of them, anyway, do not.

The report points out a major difference between company and non-company observers. Area residents and conservation groups look at the existing evidence and try to err on the side of “let’s be careful, here.”

According to Natural Resources Defense Council's Amy Mall, scientists from the U.S. Geological Survey (USGS) and U.S. Fish and Wildlife Service published a peer-reviewed journal article that discusses the results of the investigation into a 2007 fracking wastewater spill in Kentucky. Fracking wastewater that was being stored in open air pits overflowed into Kentucky's Acorn Fork Creek and left an orange-red substance, contaminating the creek with hydrochloric acid, dissolved minerals and metals, and other contaminants.

Prior to this pollution, the creek was so clean that it was designated an Outstanding State Resource Water. The Creek provides excellent habitat for the Blackside dace, a small colorful minnow protected by the Endangered Species Act (ESA) because it is a threatened species.

State and federal scientists found that the toxic fracking waste "killed virtually all aquatic wildlife in a significant portion of the fork." The dead and distressed fish had developed gill lesions and suffered liver and spleen damage.

The lead USGS scientist in the investigation stated: "Our study is a precautionary tale of how entire populations could be put at risk even with small-scale fluid spills."

One of the things that bothers Mall the most about this case is that the scientists had been alerted to the fish kill "by a local resident." All spills are supposed to be reported—by the oil and gas company—to the National Response Center.

You know how companies have been telling the public for years that frack fluid is mostly water and safe ingredients that are found in your home? Many people have been saying for years that, even diluted, the frack fluid ingredients can be very harmful to health, and this case is just additional evidence. Thanks to the U.S. Fish and Wildlife Service for enforcing the law and levying the largest fine ever for a violation of the ESA in Kentucky. While the fine was only $50,000, it is larger than many other fines paid by the oil and gas industry. Regulators should be imposing the highest penalties allowed under the law to start to create an incentive for the oil and gas industry to stop violating regulations.