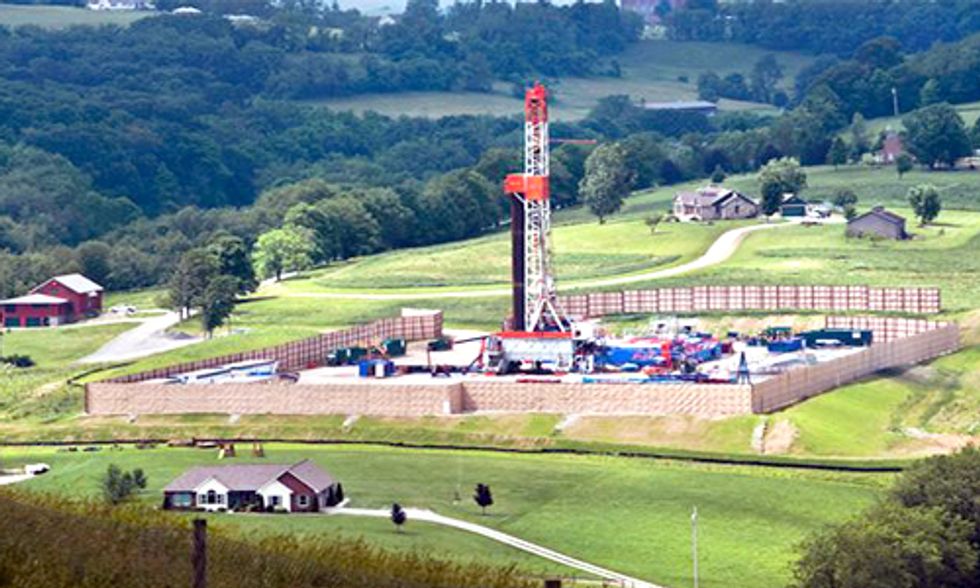 Growing up in northern West Virginia in the 1970s, I remember seeing a lot of big white plastic candy canes sticking out of the ground, marking the natural gas pipelines that ran just below the surface. You’d encounter them along streams and fence lines and the backcountry roads that always made me carsick. What I didn’t realize as a kid was how much of my family history was intertwined with those hidden gas lines.

Fracking a single well requires what Gold describes as a “movable factory,” and the equipment, trucks, pipelines and all the other associated infrastructure, as well as the demands on water, the waste and the manpower involved, are what makes modern gas drilling such a disruptive force in communities. Photo credit: Scott Goldsmith

My great-great-grandfather, William Dodd, helped lay some of the first pipe across the state, working for a subsidiary of Standard Oil at a time when John D. Rockefeller craved alternatives to oil (not for any environmental reason, but because even back then he was worried we would run out). William’s son was an administrator for Hope Gas, and his grandson (my grandfather) was a supervisor at a company extraction plant on the Ohio River. Then my dad spent his career as a corporate executive for Hope’s successor, Consolidated Natural Gas, until it was gobbled up by Dominion Resources.

That time line of mergers and name changes—from Hope to Dominion—serves as a rather succinct summary of the role of natural gas in the U.S. economy over the past couple of centuries. First used commercially in 1821 to light lamps in Fredonia, New York—almost four decades before an oil well was drilled in nearby Pennsylvania—gas has nevertheless remained oil’s “invisible twin,” as David Waples put it in his 2005 book, The Natural Gas Industry in Appalachia. Gas was often seen as an unwanted by-product, frequently burned off because coal was cheaper and oil more versatile.

Fracking, as Wall Street Journal energy reporter Russell Gold writes in The Boom, has changed all that, fundamentally altering both the U.S. economy and the nature of communities across the country. That’s because it takes place literally in our backyards. Much of the most recent wave of natural gas drilling is occurring in densely populated states like Pennsylvania, California, Ohio and Illinois. Small towns are now ground zero for the noise, industrial activity and environmental and health concerns associated with fossil fuel extraction.

By last year, roughly one out of 20 Americans lived within a mile of a recently fracked well. “This new proximity between wells and homes is one of the defining features of the new energy landscape,” Gold writes. And this change has happened in a minuscule amount of time—less than a decade, in most of the country—driven by technological innovation and Wall Street financing, without the corresponding changes in community awareness and the government safeguards needed to ensure fracking’s safety.

For most of his well-researched book, Gold focuses more on the history of hydraulic fracturing and the businessmen behind the boom than on its environmental impact. He’s a diligent reporter and able profiler of the mostly dull petroleum engineers and slightly more colorful energy company execs, men like the controversial Aubrey McClendon, who made their fortunes from fracking. But he never quite brings to life the impact on families and communities in the way that Seamus McGraw manages in his more personal and intimate The End of Country, published in 2011.

When Gold does turn from chronicling the boom to evaluating its consequences, however, he reaches a very simple conclusion: we need to slow down. Our communities, our health, our water and our future climate, he says, could very well depend on it.

Throughout my family’s four generations in the industry, wells were sunk mostly the old-fashioned way: drill a hole in the ground at a likely spot, hope to hit a pocket of gushing oil or gas, then pump the fuel out over a long period of time, with diminishing returns every year as the pocket emptied and pressure subsided. When my grandfather died a couple of years ago, he left my father shares in three West Virginia wells, all decades old, that still pump a trickle of gas today.

What changed all of that was a process originally patented in 1948 by Halliburton, though the idea goes back even further—all the way to the original Titusville, Pennsylvania, oil boom, when a court-martialed lieutenant colonel created a “petroleum torpedo” to fracture rocks in order to access more fuel. It wasn’t until 1998 that a 34-year-old engineer named Nick Steinsberger suggested the revolutionary idea of using mostly water—but massive volumes of water, mixed with a cocktail of chemicals to reduce friction—to fracture the dense slabs of Texas’s Barnett Shale and release the fuel trapped inside. (The word trapped is a bit of a misnomer; the gas is essentially part of the shale rock itself, embedded in tiny holes you can only see with a $2 million scanning electron microscope.)

When Steinsberger proposed using water, the idea was counterintuitive, to say the least. One of his bosses said he would “eat his diploma” if it worked. But Steinsberger was successful (no word on how the diploma tasted), and “the era of the massive slick-water frack had begun,” Gold writes.

Steinsberger’s “massive” volume of water was actually paltry by today’s standards. He used 1.2 million gallons; some modern wells employ five times as much. And while he drilled straight down, what has made fracking even more effective is the ability to turn the drill horizontally, sometimes for as much as two miles, breaking up more deep shale from a single pad aboveground.

Fracking a single well requires what Gold describes as a “movable factory,” and the equipment, trucks, pipelines and all the other associated infrastructure, as well as the demands on water, the waste and the manpower involved, are what makes modern gas drilling such a disruptive force in communities. And because of the perversities of the market (companies are judged by Wall Street on the basis of how many new wells they drill and how quickly), the U.S. is now producing more natural gas than it can use.

Most critically, the cumulative environmental and health impacts of all this fracking remain to be seen. In the battle for the U.S. energy future, gas is winning, and its ascendancy over coal helped the U.S. cut greenhouse gas emissions by 12 percent between 2007 and 2012, Gold writes (gains in energy efficiency and better fuel standards for cars are the other big reasons). But the gas glut also slowed the development of wind and solar energy, and while gas may be cleaner than coal (and some studies even cast doubt on that), it’s far from clean.

Gold gives McClendon’s financial maneuvering much credit for the fracking boom, but he makes it clear that a combination of market forces, disruptive technology and government support drove the revolution. The lessons for wind and solar are obvious: “create the right market signals, set smart long-term policy goals, and let the technologists develop needed breakthroughs.” If fracking can indeed provide the road map for a low-carbon economy, as he believes, it might be argued that this justifies some of the damage and disruption it has wrought. Just don’t try to tell that to the people living next to the drill pads.

“Perhaps it’s best,” Gold posits, “to think of natural gas like methadone. It’s a way for an energy-addicted society to get off dirtier fuels and smooth out the detox bumps.” But whether or not gas can provide a path to cleaner energy, there’s no doubt that the rapid, unexpected, and largely unregulated expansion of fracking has brought disruption and risk to families across the country—even those who benefited economically. “Nobody would argue that a nuclear plant should be built as quickly as possible without spending the necessary time to ensure it is safe and robust,” Gold writes. “Fracking is different. The risks of any single well are tiny compared to a nuclear power plant. But several hundred wells? Several thousand?”

My parents now live in western Pennsylvania, not far from Pittsburgh, a mile above the Marcellus Shale formation that has made their state a hotbed of drilling activity. There’s a new fracking well being erected about a mile from their suburban cul-de-sac; they can see it from their driveway. What it will mean for their lives, it’s too soon to say. But one thing is for sure: it’s a lot bigger than those candy cane markers I remember from my childhood.