How 'Fill Her Up' Buys Elections 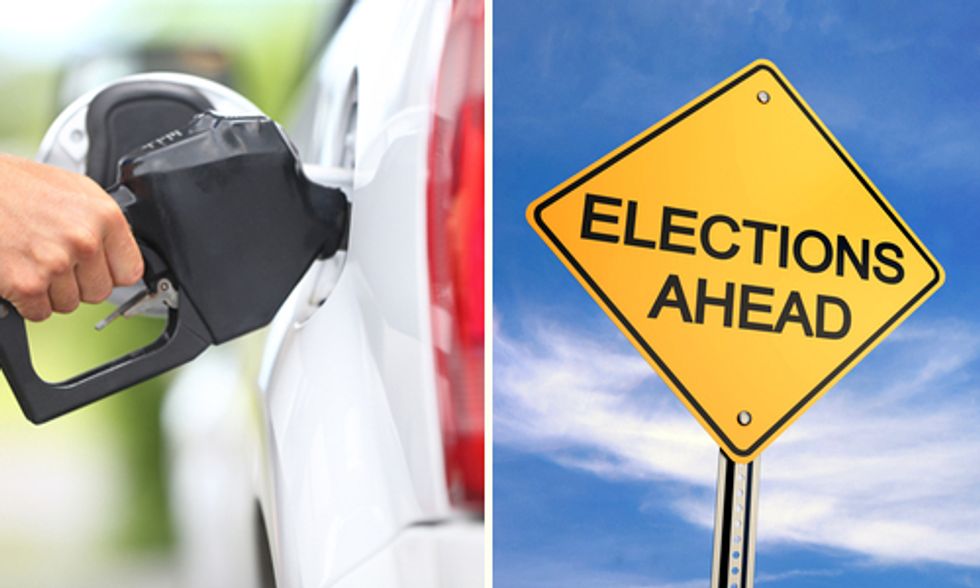 When you last filled up your gas tank, you may have thought about where the oil came from. Today let’s think about where the money you paid went. Some of it, indeed, went to the salary of the trucker who delivered the gasoline, the woman behind the cash register or the steel company that forged the drilling bit. And some of it went to long running ad campaigns like Chevron’s “We Agree” designed to make you feel as good as possible about paying too much for long dead algae. But much of it went less savory places.

As you read in the media about the huge sums of money that oil and gas interests like the Koch Brothers are pouring into campaigns around the country, remember that Big Oil is not only worrying about the U.S. Senate—the oily sheen of their dollars can be found everywhere—and you and I provided them with those funds, because we don’t (mostly) have a way to get around without using their monopoly.

The governments of Saudi Arabia, Iran and Russia for example, take a huge cut. Even if your last tank didn’t come from one of those countries, your purchase helped keep the price of global oil high enough that even with the current price slump the Saudis have nothing to worry about. At last year’s prices, 3 percent of global GDP went as unearned rents to the countries (and companies) that own low cost oil reserves—an amount equal to the entire economy of Great Britain.

Those global numbers are really too big to fathom. But locally our gasoline and diesel purchases are the most lethal toxin in American politics. Just a couple of weeks out from the election it’s good to remind ourselves—lots of voters may not think the ballot counts, but big oil knows better.

Just up the road from my San Francisco home, in Richmond, California, (population 107,000 people) for example, Chevron is making sure that democracy doesn’t get too rambunctious in the home town of its biggest refinery. The company, whose revenues amount to $200,000 for every resident of the town, doesn’t like Mayor Gayle McLaughlin, the city’s first Green Party Mayor, for her efforts to restore the city’s shoreline as public open space, and protect its residents from the fires and explosions that have rocked Chevron’s facility. So they are backing an opposing slate. Not content with spending $2.9 million on the election (about $100 per vote cast) Chevron also launched a fake “community” website to carry its point of view, the Richmond Standard. (Your tank of gas may have paid for this doozy).

Moving down the California coast, sparsely populated San Benito County has only half the population of Richmond, and no major refinery or indeed any significant oil industry presence. Farmers, however, were worried about water quality threats from untested oil technologies like acid injection that might be used to try to squeeze heavy oil out of the county’s segment of the Monterey Tar Shale. So they put Measure J on their ballot banning such extreme oil extraction techniques.

Since the oil industry is not currently extracting any significant oil in San Benito County, you might think this would not be a major threat. But so far Chevron and others have poured $2 million into a campaign against Measure J, about $200 per likely vote cast. (To be quite honest, as someone who has run political campaigns, it is difficult to fathom how you could spend $2 million on a campaign in San Benito. The national equivalent would be a presidential campaign that spent $12 billion!)

And even further south, where the first big clash between environmentalism and big oil took place, in Santa Barbara County, a similar ban on extreme oil extraction techniques like acid injection is being fought by the same oil industry coalition, and in larger Santa Barbara they have spent $5 million so far, making this the most expensive local ballot measure in the nation. Here again, the ballot language allows existing oil and gas operations (which are significant in Santa Barbara) to continue, banning only new operations using extreme technology.

But the oil industry’s toxic dollar spigot has been directed outside of California as well. In North Dakota, conservation groups, hunting and fishing interests and recreational advocates have proposed that a tiny 5 percent of the state’s oil and gas revenues be used for long range landscape conservation efforts. Even though the bill raises no taxes and places no burdens on the oil industry, the American Petroleum Institute, alarmed that it might pass, has kicked in $1 million to fight it, and total spending is expected to exceed $2 million on both sides. Why might the industry care? Because, just as in non-oil producing San Benito, any vote that suggests that oil and gas have obligations to the broader public good and limitations on their ability to exploit the land in any way they choose have become, powered by unlimited campaign largesse, more than the industry can accept.

As you read in the media about the huge sums of money that oil and gas interests like the Koch Brothers are pouring into campaigns around the country, remember that Big Oil is not only worrying about the U.S. Senate, the oily sheen of their dollars can be found everywhere and you and I provided them with those funds, because we don’t (mostly) have a way to get around without using their monopoly.