How Far Will Elected Officials Go to Protect One of World’s Biggest Carbon Polluters? 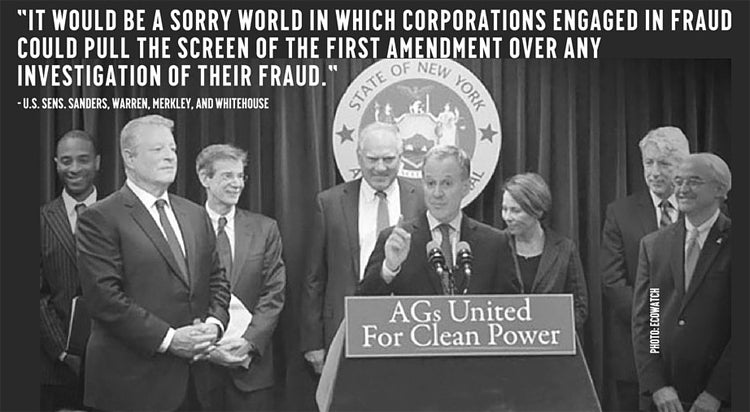 When a handful of attorneys general launched investigations of ExxonMobil for climate fraud, I wonder if they had any idea that they would be attacked for attempting to stifle the company’s right of free speech.

After all, if ExxonMobil publicly downplayed warnings by its own scientists about the threat posed by burning fossil fuels in its communications with investors and the general public, it very well may have committed fraud, which is not protected by the First Amendment. 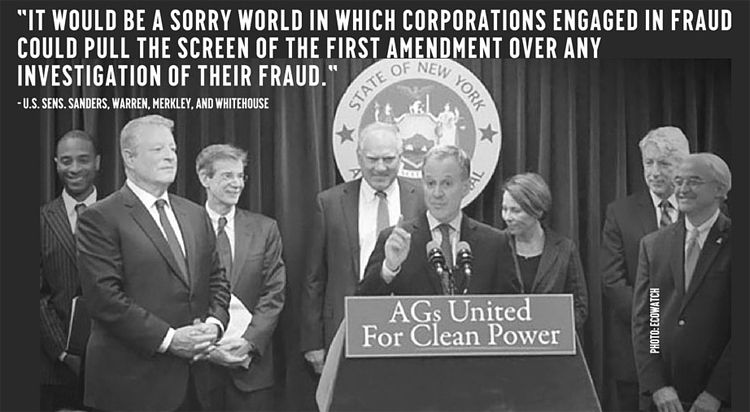 Legal experts have cited the case against the tobacco industry as an apt analogy. For years, tobacco companies emphasized uncertainty about their products’ risks to stave off government regulations. ExxonMobil essentially has been doing the same thing.

Regardless, attorneys general from 13 states and more than a dozen members of the House Science Committee have entered the fray on ExxonMobil’s behalf, all making the same indefensible First Amendment argument. And—surprise, surprise—most of them are climate science deniers who get significant campaign funding from fossil fuel companies and electric utilities.

In late March, 17 attorneys general announced the formation of the AGs United for Clean Power coalition to defend the new federal rule curbing power plant carbon emissions and investigate energy companies for fraud. So far, coalition attorneys general from California, Massachusetts, New York and the Virgin Islands have opened investigations of ExxonMobil and more are likely in the offing.

In response, Attorneys General Luther Strange of Alabama and Ken Paxton of Texas filed an intervention plea in May in a Texas district court on behalf of ExxonMobil to quash one of the investigations. They then followed up with a June 15 letter to AGs United for Clean Power cosigned by 11 other state prosecutors calling for an end to the ExxonMobil probes. The group—essentially “AGs United for Dirty Power”—maintained “[u]sing law enforcement authority to resolve a public policy debate undermines the trust invested in our offices and threatens free speech.”

Strange has been Alabama’s attorney general since 2010. In 2014, his reelection campaign contributors included the American Coal Association, American Gas Association and Koch Industries, but his biggest energy industry supporter was Alabama Power, a subsidiary of Southern Company, one of the nation’s largest electric utilities. Three Southern coal-fired power plants are the biggest carbon emitters in the country.

Paxton, meanwhile, received more money from the oil and gas industry than any other sector when he first ran for attorney general in 2014. His benefactors included Chesapeake Energy, Chevron, ConocoPhillips, Koch Industries, Marathon Oil and Phillips 66. ExxonMobil sat out Paxton’s 2014 campaign, but the company contributed to his campaigns when he served in the Texas statehouse.

Not surprising, AGs United for Dirty Power prosecutors are not only going to bat for ExxonMobil, they are running interference for the coal industry, too. Eleven of the 13 attorneys general on the letter, including Strange, Paxton, Landry and Pruitt, are among the more than two dozen AGs who have sued the Environmental Protection Agency to block the Clean Power Plan, the new federal power plant carbon emissions rule.

House Science Committee Chairman Lamar Smith also leapt to the defense of the oil giant. In mid-May, Smith and 12 other committee members sent letters to the AGs United for Clean Power coalition and eight foundations and nonprofit groups, including 350.org, Greenpeace and the Union of Concerned Scientists, demanding they turn over all documents and communications related to their efforts to hold ExxonMobil and other fossil fuel companies accountable for climate science deceptions. Echoing the Strange-Paxton argument, their letters charged that the attorneys general and the nonprofits are trying to “silence speech.”

Twelve of the 13 signatories—including Smith—received campaign contributions from ExxonMobil since the 2010 election cycle and 10 of them got donations from Koch Industries.

The 17 AGs United for Clean Power members and other recipients of Smith et al.’s request refused to comply. In separate letters, they explained that the aim of the ExxonMobil investigations is to determine whether the company provided investors and the public with accurate information and reminded Smith and his colleagues that the First Amendment does not protect fraud. They maintained that Congress has no jurisdiction over state law enforcement activities and therefore has no right to demand documents and communications. Finally, they pointed out that—ironically enough—the committee’s request threatens the nonprofit advocacy groups’ First Amendment rights of free speech and association.

Indeed, the allegation that the attorneys general investigating ExxonMobil and the nonprofit organizations that have provided them information are somehow infringing on the company’s free speech rights is absurd. No corporation has a First Amendment right to deliberately misinform about the harm associated with its product and attorneys general have every right to investigate whether a company’s actions amount to fraud. Likewise, attorneys general have the right to consult with experts either publicly or confidentially in the course of their investigations. Moreover, the nonprofits singled out by Smith et al. have the right and responsibility to provide information to state prosecutors when they have reason to suspect corporate wrongdoing.

How did Smith react to this resounding rejection? On June 17, he and 16 other House Science Committee members sent a second round of letters to AGs United for Clean Power, the foundations and the nonprofit groups, again asking for documents related to the investigations. And again the recipients said no.

What’s next? Will Strange and Paxton intervene in court again to try to stop another ExxonMobil investigation? Will Smith, who has a history of harassing federal climate scientists with subpoenas, resort to that tactic to force compliance with his request? Just how far will fossil fuel industry-funded elected officials go to protect one of the biggest carbon polluters in the world?