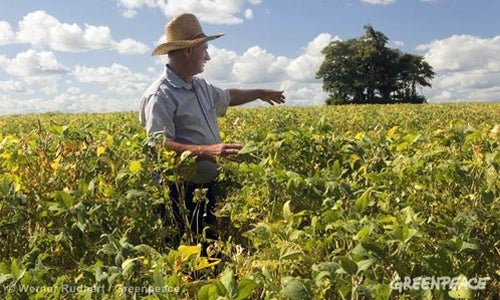 Last week, I joined a panel at the Global Agribusiness Forum in São Paolo (Brazil) to talk about the impacts of climate change on agriculture and food production.

You might be surprised that Greenpeace was at an agribusiness conference. The room was full of agri-business people, who are not the crowd we normally engage with; they are the crowd we normally challenge with our campaigns. However, I appreciated having the opportunity to be a dissenting voice and to talk about how ecological farming is a more resilient and sustainable model to produce diverse and healthy food in the face of erratic climate patterns. 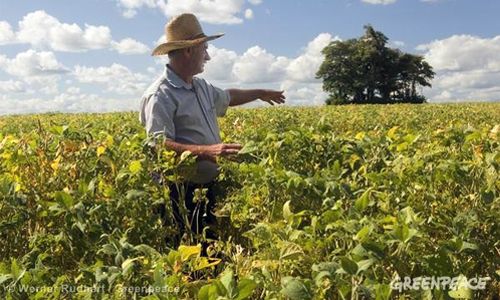 The model of farming we choose can either make us more vulnerable, or help us both to be more resilient to our changing climate and to reduce greenhouse gas emissions. We cannot afford to endlessly discuss the effects of global climate change on agriculture and do nothing about it. In fact, the impacts of climate change—like massive droughts, typhoons and storms—are already appearing and are consistent with climate change scenario predictions. The time for debate is over. Now is the time to tackle the problem head-on with real solutions.

One approach—the one that many of the Global Agribusiness Forum attendees support—is continuing to expand the chemical-intensive industrial agriculture model. Yet, this model has already shown itself to be fundamentally flawed and unable to address the climate challenges the world is already experiencing. In fact, it firstly requires stable climates and optimal growing conditions for highly specialized seeds to achieve high yields. Second, the model relies on vast areas of monoculture (large scale planting of a single crop), which harm biodiversity. Third, this model is also dependent on expensive chemical products (pesticides and fertilizers), which lead to farmer indebtedness, heavily pollute the environment, damage natural biodiversity and are based on fossil fuels. The fossil fuel dependence, in particular, means that as fossil fuel prices rise, food prices rise, causing increased suffering for the world’s poor people.

A good example of how ecological farming builds resilience to climate change is growing crops with beans, which are protein-rich and flavorful, but also can help play a role in climate adaptation. Scientists from Wageningen University in the Netherlands recently found that beans greatly improve poor soils, increase productivity of maize when grown with them, and respond well to drought. They also have multiple uses for food, animal feed, and soil fertility. These scientists found that growing maize and beans next to each other increased income by 67 percent without the use of any chemical fertilizers and farmers were interested in adopting it. 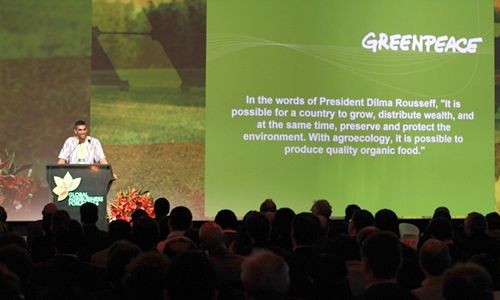 All eyes are now on emerging economies—Brazil, China and India—who together produce and consume the majority of food on the planet. As the Intergovernmental Panel on Climate Change (IPCC) report, released today, points out, our food system is going to be impacted negatively, especially in these countries. It is very possible that climate change will bring the economic development of these crucial regions to a virtual standstill. However, this is not inevitable.

The solutions of ecological farming exist and can be built upon to create a new food future. And, Brazil has a strong ecological farming movement that has already succeeded in achieving a national policy on agroecology (the science of ecological farming). They can help to lead the way. But, alongside the ecological farming model, Brazil is investing heavily in expanding industrial agriculture. Thus, Brazil currently has two parallel models that can not co-exist together: one based on growing food with the diversity of nature, that is healthy for people and the planet; the other based on chemical-intensive monocultures to grow commodity crops for export that mostly feed animals. However, only by shifting financial resources to support widescale uptake of ecological farming will Brazil show global leadership and become a beacon of modern and innovative agriculture.

Other countries are looking to Brazil to share their experiences, especially those in Africa, a region desperately in need of a system that can not only sufficiently feed people but also face the most dramatic manifestations of climate change. As an African, I can tell you that Africa doesn’t need or want the chemical-intensive industrial agriculture model. What Africa wants is for Brazil to share its successes with ecological farming and show the entire world that ecological farming is indeed the only path to ensure healthy food for people, protect the environment and cope with climate change.