How Eating Meat Increases Demand for Soybeans and Threatens the Amazon 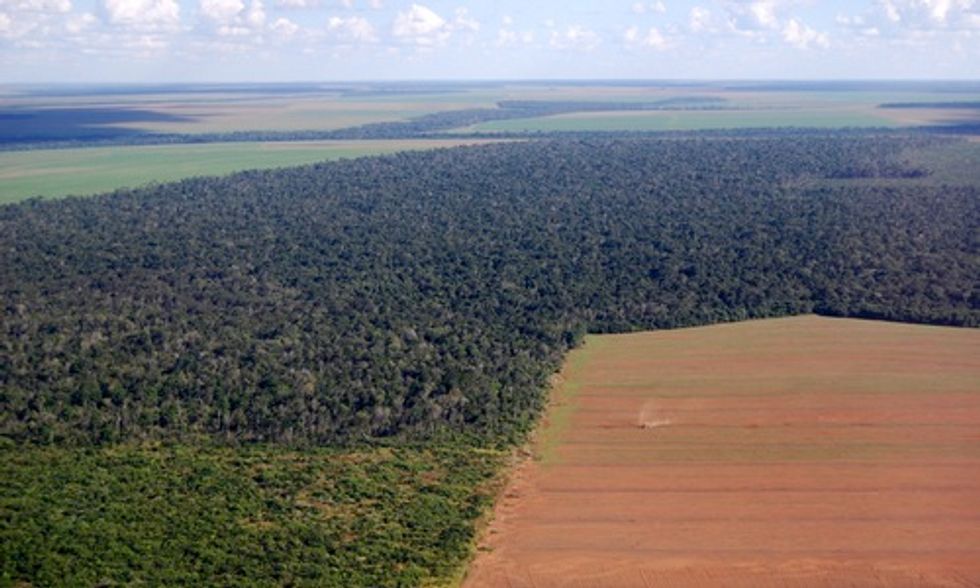 More and more of the world’s farmlands are being used to grow soybeans. It’s not to meet the needs of tofu, tempeh and miso lovers (though consumption of these has been on the rise) but of meat eaters.

Since the 1960s, soybeans have been cultivated predominantly to produce soybean meal, one part of which can be mixed with four parts of another grain (most often corn) to produce feed for livestock and chickens. This demand for high-quality protein to mix into animal feed is endangering ecosystems like Brazil’s Amazon Basin, home to some of the richest biodiversity of wildlife and fauna in the world and the cerrado, 1.2 million square miles of savannah that is fast being converted into farmlands.

Soybeans originated in China. The country is the third biggest consumer of soybeans in the world, though—the result of the Chinese government’s 1995 decision to become self-sufficient in wheat production—it now produces far less than needed and relies heavily on imports from the top three soybean producers in the world, the U.S., Brazil and Argentina. As Lester R. Brown of the Earth Policy Institute writes, the U.S. now produces about 80 million tons of soybeans, Brazil, 70 million tons and Argentina, 45 million tons.

In 2011, China produced about 14 million tons of soybeans, the same as it did in 1995. But the country consumed 70 million tons, meaning it imported some 56 million tons from elsewhere. Only about 10 percent of all of these soybeans was eaten as tofu or some other food; the rest were crushed for animal feed and soybean oil.

Indeed, soybeans, as Brown notes, are “far more pervasive in the human diet than the visual evidence would indicate” as they are an ingredient in many processed foods.

The U.S. is the biggest producer and the biggest consumer of soybeans. More land in the country is now devoted to soybean production than to wheat. Brazil and Argentina are at risk of becoming soybean monocultures, as the area they have planted in soybeans exceeds or doubles that used to plant other grains.

In Brazil, the cerrado has been increasingly used for agriculture following the discovery that adding phosphorus and lime could make its soil fertile. The cerrado also now provides more than 70 percent of the country’s beef cattle production. The cerrado remains a key ecological site; besides the Amazon, it feeds into two other major water basins, the Paraguay and São Francisco Rivers. Clearing the cerrado for agricultural and other uses has certainly been detrimental for its ecosystems, Brown writes:

Since 1970, the forested area in the Amazon Basin has shrunk some 19 percent from its 400 million hectares. For the cerrado, it is estimated that roughly half of its original 200 million hectares has been lost. In both cases, soybean expansion has played a significant role.

In Brazil, government initiatives to improve monitoring of deforestation have helped to slow the clearing of land. Environmental groups are also putting the pressure on major soybean buyers to agree to a moratorium in buying soybeans produced on deforested land.

But the rapid rate at which soybean consumption has grown around the world seems likely to continue as demand for meat, milk and eggs continues. In Brazil, Argentina and elsewhere, economic pressure to clear land and convert more of the cerrado for agricultural uses will continue.