How Drought Helped Spark Syria’s Civil War—Is it One of Many Climate Wars to Come? 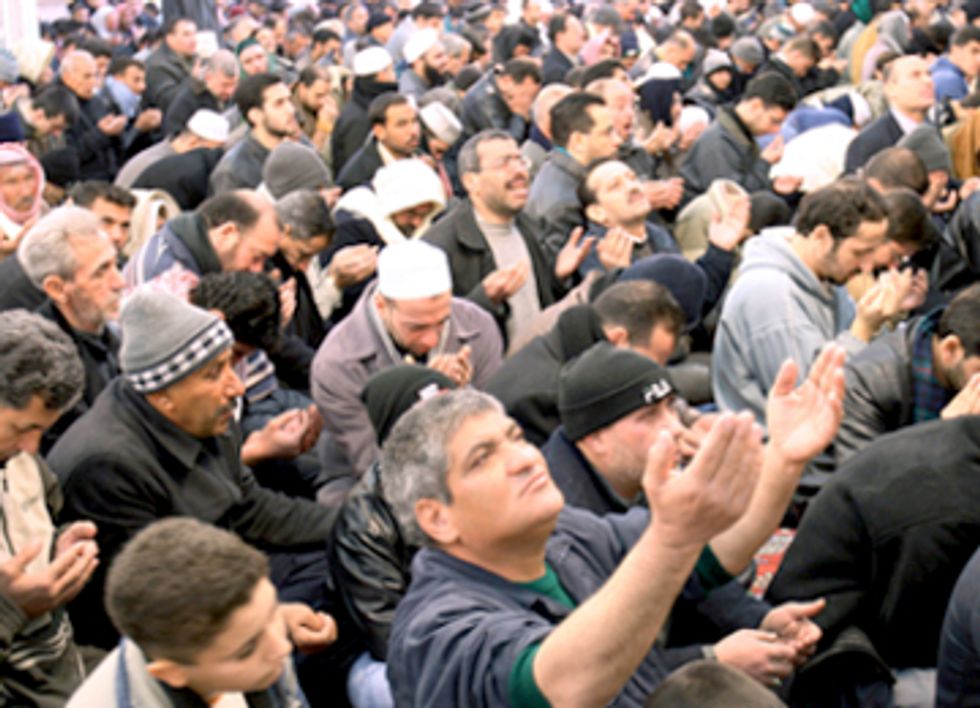 Climate change is already hurting the world’s most vulnerable populations. Those who live in areas hit hard by drought, severe storms or rising seas and can’t relocate because of economic or social factors bear the brunt of our planet’s increasing volatility.

One way the changing climate has already made itself known is through a devastating drought—and ensuing food shortage—in Syria; it created a powder keg, and played a significant role in sparking the country’s civil war. We can expect to see similar scenarios unfold in the future.

Moyers & Company’s John Light spoke with Francesco Femia, co-founder of the Center for Climate and Security—a think tank with an advisory board consisting of retired military commanders and international affairs experts—about how climate change serves as a “threat multiplier” in volatile regions such as Syria, Egypt and Pakistan, and what America’s role should be in a world in which climate change increasingly exacerbates—and cause—international crises:


Light: What’s been going on with Syria’s water resources over the past several years?

Femia: Essentially, a massive, five-and-a-half-year drought. From 2006 to 2011, 60 percent of Syria’s land experienced, in the words of one expert, the worst long-term drought and most severe set of crop failures since agricultural civilizations began in the Fertile Crescent many millennia ago. That, on top of natural resource mismanagement by the Assad regime—subsidizing water-intensive wheat and cotton farming and unsustainable irrigation techniques—led to a large amount of devastation.

Many international security analysts were saying, right up to the day before protest broke out in the small rural town of Daraa, that Syria was immune to the Arab Spring and to the grievances that other Arab publics had brought to bear on their leaders. And that clearly wasn’t the case.

There was quite a bit of displacement happening; millions were trekking into urban areas. Those urban areas were experiencing quite a bit of economic insecurity. Some of that was also coming from poverty and competition from other influxes of people—for example, Iraqi refugees who had been flowing into Syria since 2003, and also Palestinian refugees. These were cities that were already hard-pressed economically.

There wasn’t a lot of information on this until quite recently. The Assad regime wasn’t allowing journalists access to these farmers and herders who were moving into the cities. The military would often accompany the migrants to make sure that journalists had no access. But under the surface of what seemed to be a stable country, there was a large-scale environmental and human disaster happening.

Light: How would you explain to a security analyst that this is related to climate change?

Femia: Part of the picture that was missing when we started looking into this issue were the climate dynamics. A National Oceanic and Atmospheric Administration study published in October 2011 showed that there was strong evidence that the recent prolonged period of drought in the Mediterranean littoral area, including the Middle East, is linked to climate change. It was one of the first studies linking climate to observable changes as opposed to just looking out at projected changes.

And then a recent model of climate impact for the future conducted by the International Food Policy Research Institute projected that if current rates of greenhouse gas emissions continue, yields of rain-fed crops in Syria will likely decline between 29 and 57 percent from 2010 to 2050. That’s a huge number.

And when you look at the effects of the drought on people within Syria, we can see that displacement has put strains on urban areas and could have contributed to the spread of unrest in Syria.

Of course the conflict is ongoing, and it’s very difficult to study anything that’s happening in Syria at this point. We still have yet to disentangle the line from climate and drought, to displacement, to conflict. We’re not making any causal claims about climate change causing conflict, but it certainly is what the security community calls a “threat multiplier.” It makes other threats to human security worse, and in this case we see it fast at hand.

If security analysts had been incorporating environmental security variables, including climate, into their assessments of how stable Syria was, they may have been able to make a different assessment of Syria’s stability and warned policymakers.

Light: What are some other effects of climate change that you can see exacerbating tensions in already-tense areas?

Femia: Climate change primarily manifests itself through water. But it varies; different kinds of water, different ways. It can lead to more extreme weather events: either a drought or a major storm or an amount of rainfall that’s unusual and leads to flooding. It’s not just scarcity, it’s too much, too little and unpredictably. For example, it’s already difficult to predict how the monsoon season will change from year to year. It’s the same with droughts in the Sahel behaving differently.

And then with salt water you have the problem of sea level rise and ocean acidification. Sea level rise is likely to devastate infrastructure along the coastlines, but it will also have a significant impact on freshwater and the economies that are tied to coastal infrastructure, which go far inland in many countries. It’s not divorced from fresh water: sea level rise can penetrate aquifers that are close to the coast and then you have salt water intrusion, which makes that fresh water useless. Egypt is going to be facing a pretty significant problem in the future as a result of this, a problem that it doesn’t need, as its coastal aquifers—there are many, there’s a lot of water there— have sea water intrude. A significant part of Egypt’s economy is based on that area of the Nile delta in and around the coastline, and a lot of the country’s population is there.

Light: How do these climate change-related conflicts—what we see now in Syria, or what we will see elsewhere in the future—affect U.S. security interests? How should we be thinking about these conflicts strategically?

Femia: The U.S. has started to define its security not just in terms of potential conflicts between nations but also in terms of how failed and fragile states might contribute to transnational security problems. These states can pose any number of problematic security risks, whether it’s a sharp increase in cross-border refugee movement creating refugee crises, whether it’s the implosion of a state that leads to the proliferation of non-state actors—terrorist organizations that might feed on such a situation—or the proliferation of weapons. It can also lead to significant food insecurity, which can have global implications.

For example, Pakistan is a very worrying place, not just because you have a number of terrorist organizations that operate in Pakistan, but also because they have a lot of nuclear material, fissile material and weapons floating around in that country. At the same time, Pakistan is quite vulnerable to the effects of glacial melting, which provides a lot of its water. We saw the impacts of flooding in Pakistan not that long ago, which displaced millions of people. So you don’t want to place this climate strain on a country that’s already so fragile and vulnerable. There are a lot of security problems associated with the situation on the ground in places like Pakistan, places like East Africa, etc.

We also need to look at the issue in a broader sense. Obviously, arctic melt is going to affect the movement of goods. Climate change may be affecting the movement of fisheries in, for example, places like the South China Sea. It’s a main shipping lane for the U.S. The South China Sea is very important for both the U.S. and China, and global trade, and is sort of a sticking point, with many disputes over who can operate in what part of the sea. Climate change is going to have security implications across the globe and conflict is just one area of concern.

Light: How would you recommend America address the increasing number of conflicts exacerbated by climate change?

Femia: What the U.S. should do in this context is, first, focus on integrating climate change and environmental security variables into how it analyzes intelligence and how it looks at the conflict potential of a region or nation. What that means is that the analysts—not just in the intelligence community but also in places like U.S. Agency for International Development (USAID) and the State Department—who look at parts of the world and try to anticipate what might go wrong in these areas, they really need to look at the climate and environmental security variables that impact people’s lives and also look out 10, 15, 20 years at potential conflicts down the line.

Secondly, the U.S. has to do the same sort of thing in its broader national security planning. The Department of Defense has actually been leading the charge in this area. For example, in 2010, it included climate change in its quadrennial defense review. The Navy has a task force on climate change looking at the impacts of sea level rise, not just on the Navy itself, but on how that might influence national security.

Thirdly, based on those assessments, put some resources into the issue. We put a lot of money—oftentimes with bipartisan support—into counterterrorism. We put a lot of money into nonproliferation. But we don’t see that level of resources going into combating climate change. I’d say the U.S., by elevating this issue in its national security thinking, should prioritize devoting resources to both adapting to climate change itself and to helping countries that are vulnerable adapt to climate impacts. It should be a bipartisan issue. It is a national security issue. There’s nothing ideological about the problem. Climate change is happening and we should do something about it. There are differences in how to go about addressing the issue, but in general this is something that there should be widespread agreement on. When you look at it in the context of security, it’s obvious that this has nothing to do with party divisions and we should be putting the necessary resources into it.

Part of the problem is some analysts will say, “well, we don’t want, for example, the military doing much about climate change, that’s not what they do.” Well, that’s true. But if you let this problem get out of hand you’re going to have a number of situations in the future, whether they’re major disasters or conflicts, that our security forces may have to respond to. It will cost us a lot more in the long term if we do nothing now.