How Diet and Climate Change Are Intrinsically Linked 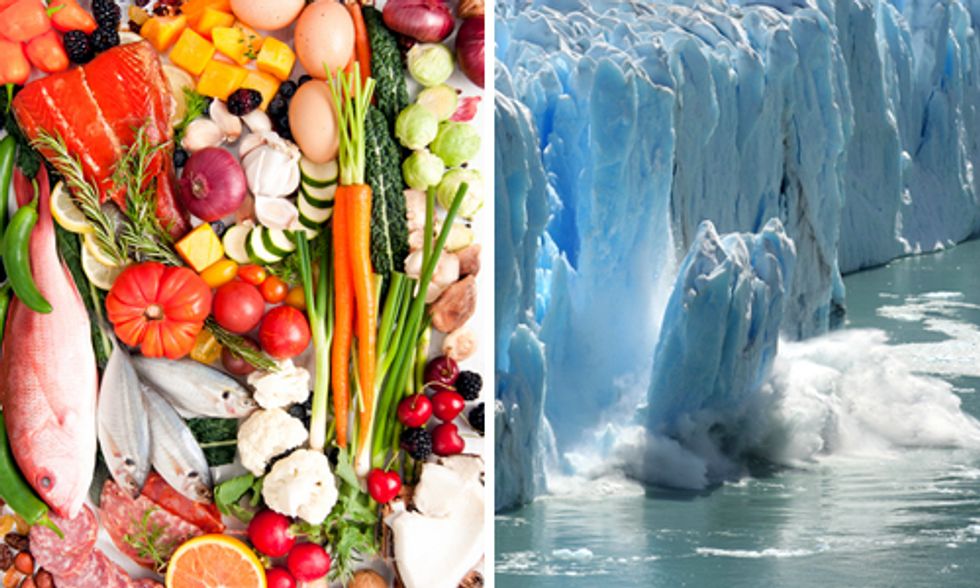 The news is enough to make climate campaigners choke on their high-fibre breakfast cereal: If Americans adopted the dietary guidelines suggested by their own Department of Agriculture, greenhouse gas emissions (GHGs) would actually go up by 12 percent.

Direct emissions from agriculture make up between 10 percent and 12 percent of overall greenhouse gas emissions. If you throw in factors such as fertilizer and chemical production, fuel use and agricultural land-use change, the proportion rises—along with the uncertainty—to between 17 percent and 32 percent.

And even if Americans did what dietary campaigners urge and restricted themselves to a healthier 2000 calories a day, GHGs would not fall significantly.

Martin Heller and Gregory Keoleian, scientists at the University of Michigan’s Centre for Sustainable Systems, publish these findings in the Journal of Industrial Ecology.

And their conclusion  is liable to prove controversial, if only because other agriculturalists and economists have already argued that changes in human diet and more intelligent ways of promoting agriculture could simultaneously deliver better nutrition, greater food security and less damage to global climate.

Cynics will remind each other that all scientific conclusions about diet, health, environment and nutrition tend to become contentious shortly after publication.

“Omitting human behavior is like designing a bridge without accounting for traffic,” they say.

Social commentators will also point out that in a society in which one-third of all Americans are classed as clinically obese and another third are overweight—and in which, paradoxically, 49 million are also “food insecure” or just plain hungry—there might be something irrelevant about the U.S. government’s dietary guidelines.

But the study by Heller and Keoleian, at bottom, simply addresses the problems associated with bureaucratic advice on subjects as personal as breakfast, lunch and dinner.

Direct emissions from agriculture make up between 10 percent and 12 percent of overall greenhouse gas emissions. If you throw in factors such as fertilizer and chemical production, fuel use and agricultural land-use change, the proportion rises—along with the uncertainty—to between 17 percent and 32 percent.

Researchers may enhance yields and farmers may use resources more efficiently, but populations will increase—and so will demand for meat and dairy products.

So the two scientists looked at greenhouse gas emissions associated with 100 foods. They considered the losses and waste in the food business: around a third of all food globally is lost or thrown away, and emissions from wasted food in the U.S. add up to the equivalent of an extra 33 million cars on American roads.

They added into the mix the potential effects of social change—looking at studies from Germany and Switzerland, at EU targets, and at calculations of the demand for water and fertilizer in Asia and Africa—to get a surer picture of the costs and losses and emissions associated with agriculture.

They then examined the particular case of the U.S., where, they say, “repeated assessments find that Americans do not meet the federal dietary recommendations.”

Their calculation is that even if U.S. citizens consumed less beef and thus reduced greenhouse gas emissions—beef makes up 4 percent by weight of available food, but 36 percent of emissions—the increased use of dairy products would have the opposite effect.

If Americans followed the recommendations and continued to consume the same number of calories on average, greenhouse gas emissions would rise by 12 percent. If the nation reduced its intake to 2000 calories a day on average, the reduction would be only 1 percent.