How Climate Change is Damaging the Great Lakes 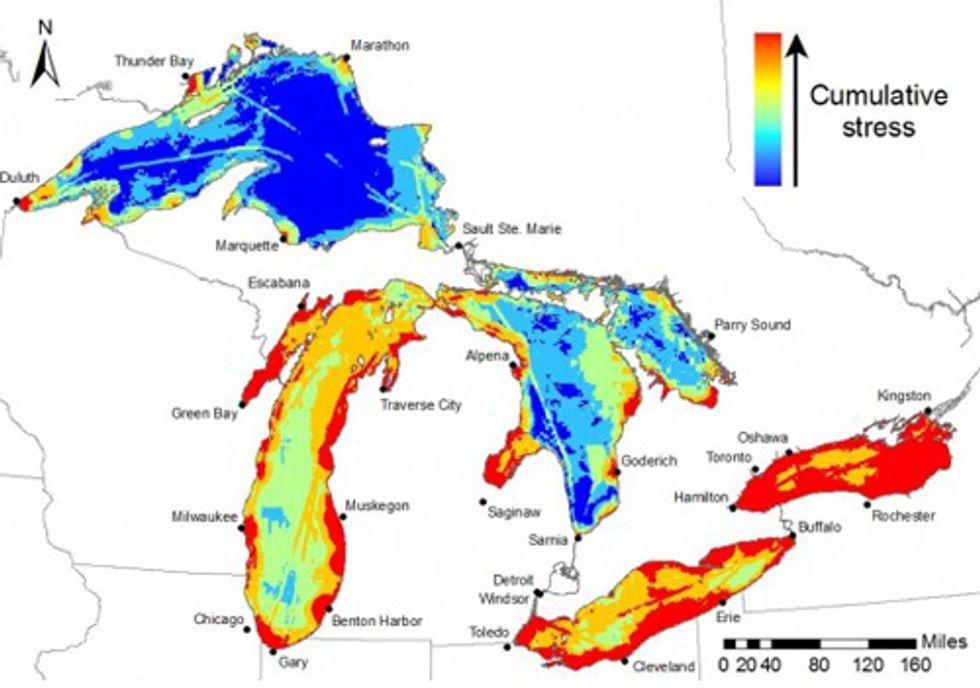 Great Lakes Michigan and Huron set a new record low water level for the month of December, and in the coming weeks they could experience their lowest water levels ever. It’s becoming certain that, like the rest of the country, the Great Lakes are feeling the effects of climate change.

Last year was officially the warmest year on record for the lower-48 states. The hot summer air has been causing the surface water of the Great Lakes to increase in temperature. One might think this causes more precipitation around the lakes, but the warmer winter air is causing a shorter duration of ice cover. In fact, the amount of ice covering the lakes has declined about 71 percent over the past 40 years. Last year, only 5 percent of the lakes froze over—compared to 1979 when ice coverage was as much as 94 percent.

Furthermore, the continuing effect of the historic drought in the Midwest is causing increased levels of evaporation. This combination of climate change side-effects results in low water levels for the Great Lakes.

The impact climate change has on the five lakes—Superior, Michigan, Huron, Erie and Ontario—will have serious implications for aquatic life, as well as high economic costs for communities.

The two maps below developed by the Great Lakes Environmental Assessment and Mapping project (GLEAM) illustrate the severity of the environmental impacts on the lakes, as well as the warming temperature of the lakes.

The researchers behind GLEAM note that water surface temperatures between 2000 and 2100 will warm at rates ranging from 0.37-0.93 degrees Celsius per decade in Lake Superior, and 0.20-0.60 degrees Celsius per decade in Lake Eire as a result of climate change. Research conducted by the University of Minnesota-Duluth’s Large Lakes Observatory (LLO) found that summer surface water temperatures on Lake Superior have increased 2.5 degrees Celsius between 1979 and 2006. As climate change continues, fueling more frequent and more extreme droughts, we will continue to see more reductions in the extent and duration of winter ice cover.

Researchers at GLEAM are not alone in this finding. Several different climate models for the Great Lakes region all predict that lake levels will decline over the next century. The National Oceanic and Atmospheric Administration Great Lakes Environmental Research Laboratory (GLERL) uses two different modeling approaches, researching the net effect of precipitation due to climate change, and the warming lakes and air surrounding the lakes are leading to increased evaporation levels.

The third National Climate Assessment draft, the most comprehensive peer-reviewed analysis of how climate change impacts regions and sectors across the U.S., was released last week. It found that the likelihood of extreme events like intense heat waves, mild winters and lack of ice cover on the lakes will occur with greater frequency. The draft also finds: