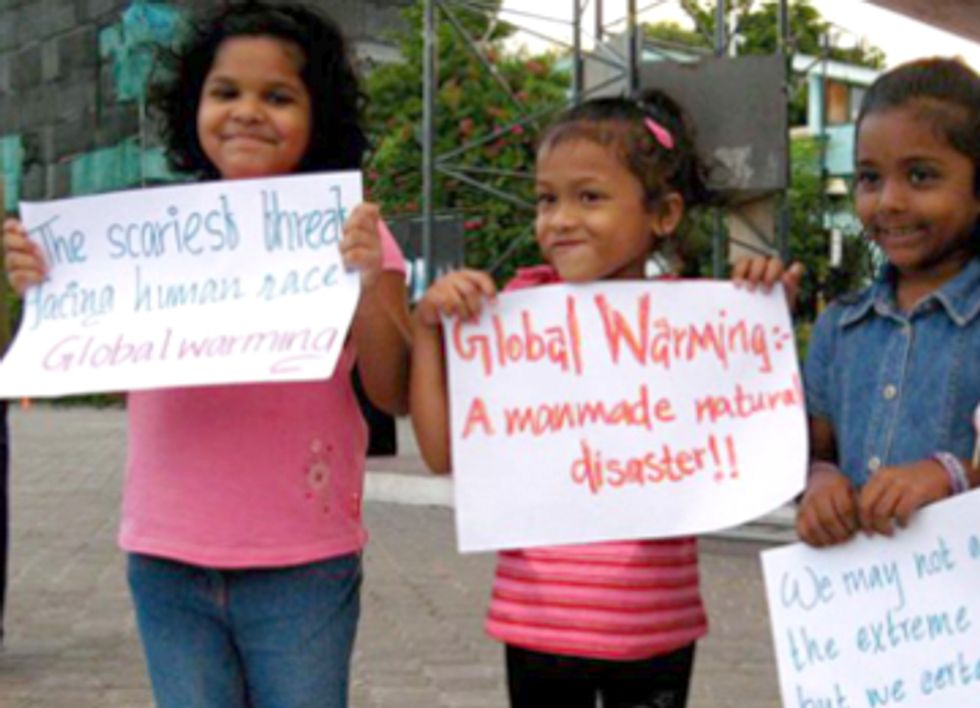 President Obama announced recently that, given Congress's refusal to act, he will use his administrative power to reduce carbon dioxide (CO2) emissions from power plants and encourage renewable energy. As he said in his State of the Union Address in February, "For the sake of our children and our future, we must do more to combat climate change." The latest report that the average daily CO2 concentration exceeded 400 parts per million—a milestone signaling major climate change—should concentrate our collective mind on this issue and prompt wider action.

Here's why children are key to winning the climate argument and why action is needed now. The developing fetus and child are more biologically and psychologically vulnerable to the many direct and indirect effects of climate change and fossil fuel combustion, its major human source. These effects include increased incidence of malnutrition and infectious disease, physical and psychological trauma from extreme weather-related disasters, heat stress, respiratory disease, reproductive and developmental disorders and cancer. Early impairment and disease can affect the physical and psychological health and well-being of children over their entire life-course. Effects of in utero and postnatal exposure to both toxic and psychological stressors may be inherited transgenerationally, impacting the health of future generations.

The World Health Organization (WHO) estimates that more than 88 percent of the existing global burden of disease due to climate change occurs in children less than five years of age. Although children everywhere are affected, most of the impact is felt in populations of low socioeconomic status, squarely raising the issue of environmental justice. The impacts will continue to grow under the projected trajectory of climate change and fossil fuel emissions.

While there are few quantitative estimates of the proportion of childhood morbidity and mortality due to human-induced climate change, there is scientific agreement that both direct and indirect effects of climate change have already taken a significant toll on children and are predicted to increase dramatically unless action is taken. WHO estimates climate change could be causing more than 150,000 deaths annually and approximately five million years lost due to ill-health, disability or early death every year as a result of increasing incidences of malnutrition and just a few diseases considered. These estimates could more than double by 2030 in the absence of meaningful action.

Malnutrition and infectious disease represent the largest share of the burden of childhood disease and death attributed to climate change. Children are more vulnerable than adults to famine and nutritional deprivation since they require three to four times the amount of food on a body weight basis than adults. Children's immature immune systems make them more susceptible to infectious disease pathogens due to crop and water contamination from storms and floods, as well as to vector-borne diseases (e.g., malaria and dengue fever) which are increasing in certain regions due to climate change. Illnesses attributed to salmonella, a food-borne infectious disease, also have risen with higher temperatures across much of continental Europe.

Weather-related disasters (floods, droughts, cyclones, hurricanes), which have increased in frequency and intensity as a result of climate change, have directly affected an estimated 66.5 million children worldwide, 600,000 of whom died every year from 1990 to 2000. The number of children affected is predicted to more than double, rising to 175 million a year in the next decade. Children are highly vulnerable both to physical trauma, stress, drowning and displacement due to floods and to famines associated with drought. In 2005 Hurricane Katrina forced one million people in New Orleans from their homes and left 372,000 children without schools. Higher rates of anxiety and depression have been found among children affected by this disaster.

Because of their higher respiratory rate and immature metabolic/detoxification, DNA repair and immune systems, children are also more vulnerable to air pollutants released by fossil fuel burning (particulate matter, polycyclic aromatic hydrocarbons, mercury, sulfur and nitrogen oxides) as well as ozone and pollens that are increased by higher temperatures. We and other scientists have found that even relatively low levels of these pollutants are linked to lower birth weight, deficits in lung function, respiratory symptoms, childhood asthma, bronchitis, developmental disorders and increased risk of cancer. Exposure to air pollution in childhood can result in a reduction in lung function and ultimately increased risk of chronic respiratory illness and greater susceptibility to cardiovascular disease in adulthood.

To be effective, prevention and adaptation strategies to climate change must be centered on the needs of our children—present and future. Reports by the Intergovernmental Panel on Climate Change, McKinsey and researchers at Stanford University indicate that the cost of acting broadly to reduce emissions from power generation and transport, make buildings and appliances more efficient, and invest in alternative fuels and technologies is modest compared with the benefits to our children and their future. We must do it "for their sake."

This article was originally posted at OnEarth.