Scientists at Work: Sloshing Through Marshes To See How Birds Survive Hurricanes 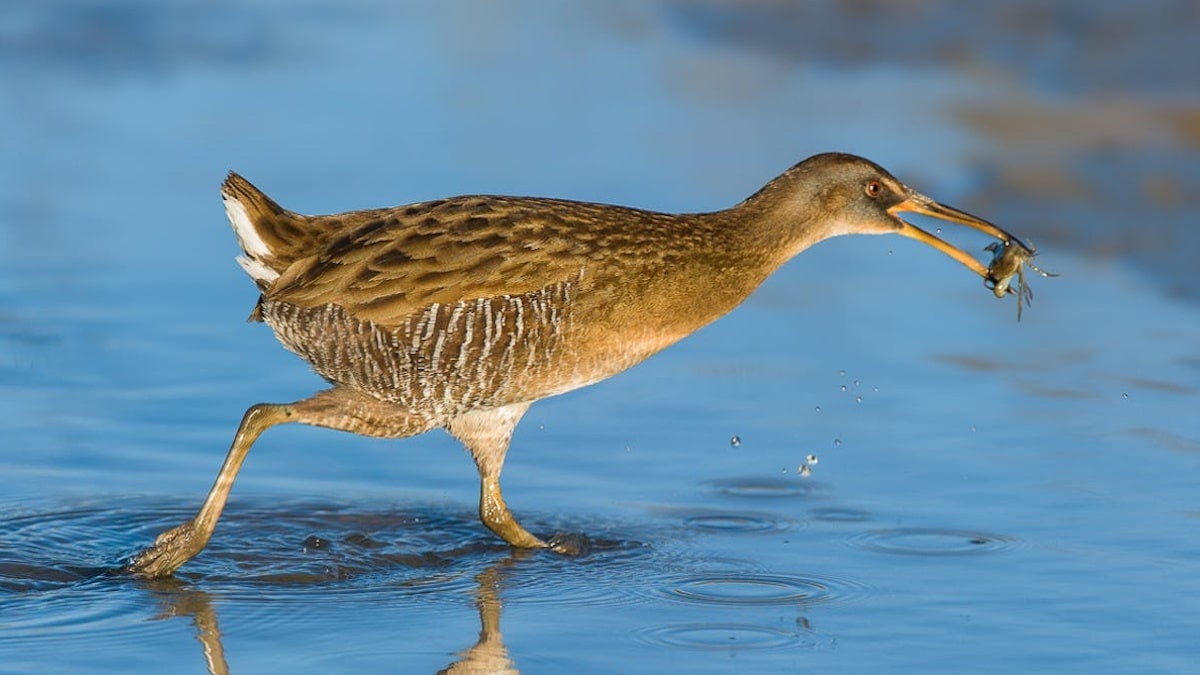 A clapper rail with a fiddler crab in its bill. Michael Gray / CC BY-ND

By Scott Rush and Mark Woodrey

When storms like Huricane Zeta menace the Gulf Coast, residents know the drill: Board up windows, clear storm drains, gas up the car and stock up on water, batteries and canned goods.

But how does wildlife ride out a hurricane? Animals that live along coastlines have evolved to deal with a world where conditions can change radically. This year, however, the places they inhabit have borne the brunt of 10 named storms, some just a few weeks apart.

As wildlife ecologists, we are interested in how species respond to stresses in their environment. We are currently studying how marsh birds such as clapper rails (Rallus crepitans) have adapted to tropical storms along the Alabama and Mississippi Gulf coast. Understanding how they do this entails wading into marshes and thinking like a small, secretive bird.

A least bittern, one of the smallest species of heron. Michael Gray / CC BY-ND

Mucky and Full of Life

Coastal wetlands are critically important ecosystems. They harbor fish, shellfish and wading birds, filter water as it flows through and buffer coastlines against flooding.

You wouldn’t choose a Gulf Coast salt marsh for a casual stroll. There are sharp-pointed plants, such as black needlerush, and sucking mud. In summer and early fall the marshes are oppressively hot and humid. Bacteria and fungi in the mud break down dead material, generating sulfurous-smelling gases. But once you get used to the conditions, you realize how productive these places are, with a myriad of organisms moving about.

Marsh birds are adept at hiding in dense grasses, so it’s more common to hear them than to see them. That’s why we use a process known as a callback survey to monitor for them.

First we play a prerecorded set of calls to elicit responses from birds in the marsh. Then we determine where we think the birds are calling from and visually estimate the distance from the observer to that spot, often using tools such as laser range finders. We also note the type of ecosystem where we detect the birds – for example, whether they’re in a tidal marsh with emergent vegetation or out in the open on mud flats.

Through this process we’ve been able to estimate the distributions of several species in tidal marshes, including clapper rails, least bitterns (Ixobrychus exilis) and seaside sparrows (Ammospiza maritima). We’ve also plotted trends in their abundance and identified how their numbers can change with characteristics of the marsh.

We’ve walked hundreds of miles through marshes to locate nests and to record data such as nest height, density of surrounding vegetation and proximity to standing water, which provides increased foraging opportunities for rails. Then we revisit the nests to document whether they produce young that hatch and eventually leave. Success isn’t guaranteed: Predators may eat the eggs, or flooding could wash them out of the nest and kill the developing embryos inside.

Rails in the Grass

Our research currently focuses on clapper rails, which look like slender chickens with grayish-brown feathers and short tails. Like many other marsh birds, they have longish legs and toes for walking across soft mud, and long bills for probing the marsh surface in search of food. They are found year-round along the Atlantic and Gulf coasts.

Clapper rails typically live in tidal marshes where there is vegetation to hide in and plenty of fiddler crabs, among their frequent foods. Because they are generally common and rely on coastal marshes, they are a good indicator of the health of these coastal areas.

Water levels in tidal marshes change daily, and clapper rails have some adaptations that help them thrive there. They often build nests in areas with particularly tall vegetation to hide them from predators. And they can raise the height of the nest bowl to protect it against flooding during extra-high or “king” tides and storms. The embryos inside their eggs can survive even if the eggs are submerged for several hours.

When a tropical storm strikes, many factors – including wind speed, flooding and the storm’s position – influence how severely it will affect marsh birds. Typically birds ride out storms by moving to higher areas of the marsh. However, if a storm generates extensive flooding, birds in affected areas may swim or be blown to other locations. We saw this in early June when Hurricane Cristobal blew hundreds of clapper rails onto beaches in parts of coastal Mississippi.

In coastal areas immediately to the east of the eye of a tropical cyclone we typically see a drop in clapper rail populations in the following spring and summer. This happens because the counterclockwise rotation of the storms results in the highest winds and storm surge to the north and east of the eye of the storm.

But typically there’s a strong bout of breeding and a population rebound within a year or so – evidence that these birds are quick to adapt. After Hurricane Katrina devastated the Mississippi Gulf Coast in 2005, however, depending on the type of marsh, it took several years for rail populations to return to their pre-Katrina levels.

Now we’re radio-tagging clapper rails and collecting data that allow us to determine the birds’ life spans. This information helps us estimate when large numbers of birds have died – information that we can correlate with events like coastal hurricanes.

Tropical storms have shaped coastal ecosystems since long before recorded history. But over the past 150 years humans have complicated the picture. Coastal development – draining marshes, building roads and reinforcing shorelines – is altering natural places that support marsh birds.

Clapper rails and other species have evolved traits that help them offset population losses due to natural disasters. But they can do so only if the ecosystems where they live keep providing them with food, breeding habitat and protection from predators. Coastal development, in combination with rising sea levels and larger tropical storms, can act like a one-two punch, making it increasingly hard for marshes and the species that live in them to recover.

Biologist Paul Ehrlich has compared species at risk to rivets on an airplane. You might not need every rivet in place for the airplane to fly, but would you fly it through a cyclone if you knew that 10% of its rivets were missing? What about 20%, or 30%? At some point, Ehrlich asserts, nature could lose so many species that it becomes unable to provide valuable services that humans take for granted.

We see coastal marshes as an airplane that humans are piloting through storms. As species and ecosystem services are pummeled, rivets are failing. No one knows where or how the aircraft will land. But we believe that preserving marshes instead of weakening them can improve the chance of a smooth landing.