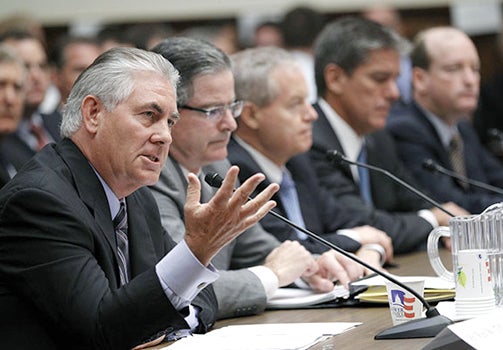 Lingering high oil and gasoline prices contributed to another quarter of huge profits for the big five oil companies: BP plc, Chevron Corp, ConocoPhillips, ExxonMobil Corp and the Royal Dutch Shell Group. They earned a combined $28 billion in the third quarter of 2012, reaping more than $90 billion in profits through the first three quarters of the year (see Table 1). As they did last year, the “big five” are on track to easily exceed $100 billion in profits this year. 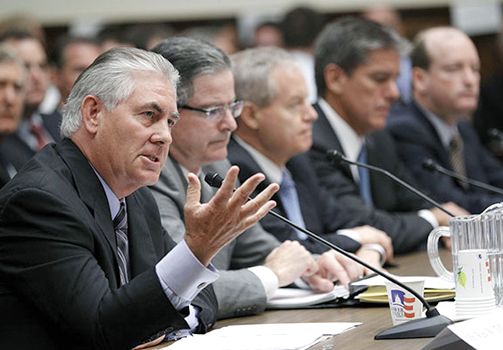 So what benefits do these profits produce? Do they create new jobs, as those advocating for the tax breaks and lower corporate tax rates would lead us to believe? Not exactly. Between 2005 and 2010—the last year for which data is available—the “big five” reduced their workforce by 11,200 employees, according to a report by the Democratic staff of the House Natural Resources Committee. And the profits certainly haven’t been used as a buffer to lower gas prices, which are still hovering around $3.50, according to the American Automobile Association. Instead, the companies used these enormous profits on some other activities.

But the “big five” did spend lots of money on Capitol Hill in 2012, investing heavily to protect their special tax breaks. Since 2011 they have spent more than $100 million lobbying Congress to protect low tax rates and block pollution controls and safeguards for public health.

In addition to lobbying Congress, the big five oil companies have directly contributed $6.7 million to federal candidates and political parties with 78 percent going to Republicans and 22 percent to Democrats, according to the Center for Responsive Politics.

We also know that these companies have been funneling money into super PACs and political advocacy organizations to broadcast ads that oppose President Obama and his clean energy agenda and promote the companies’ tax breaks. Last month, for example, Chevron made the single-largest corporate donation since the Supreme Court opened the floodgates for corporate money in elections in its Citizens United v. Federal Election Commission decision. The company invested $2.5 million in the Congressional Leadership Fund, a super PAC for House Republicans.

This relatively modest investment in lobbying, elections and politics by oil companies has paid off handsomely. In addition to maintaining their special tax breaks, the FY 2013 budget passed by the house would provide an additional new tax cut of more than $2 billion annually for these same companies in the fiscal year beginning this past October. Overall, the House of Representatives voted 109 times this Congress to enrich oil companies, according to a study by Reps. Henry Waxman (D-CA) and Ed Markey (D-MA). This is a return on investment that would make Donald Trump jealous.

If the story of huge profits, stock buybacks, cash reserves, lobbying, and campaign dollars by big oil companies sounds familiar, that’s because it is. The “big five” rake in billions of dollars due to high oil and gasoline prices, all while receiving special tax breaks and producing less oil. It’s a story that will be rebroadcast again and again until Congress begins to reform this industry, starting with ending their $2.4 billion in special tax breaks.

Download full data on Big Oil’s profits and activities in the third quarter of 2012.

Daniel J. Weiss is a senior fellow and director of Climate Strategy at the Center for American Progress. Jackie Weidman is a special assistant for Energy Opportunity at the Center.