How Big Food Creates an Illusion of Choice at the Supermarket 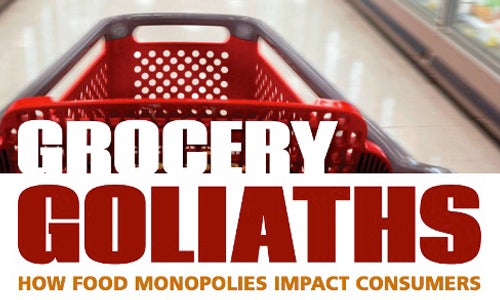 A new analysis shows that the top four or fewer food companies control a substantial majority of the sales of each item, and they often offer multiple brands in each type of grocery, giving consumers the false impression they are choosing among competing products.

The in-depth analysis, released by Food & Water Watch on Thursday, illustrates the consolidation of the grocery industry and the range of impacts it has on the food chain. 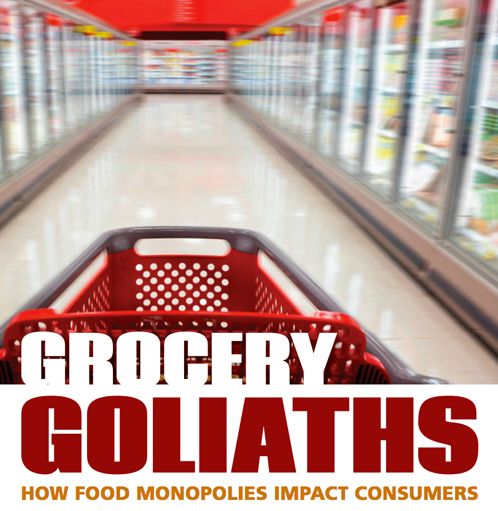 Grocery Goliaths: How Food Monopolies Impact Consumers examines 100 types of grocery products and found that as food companies and supermarket chains have consolidated over the last few years, the illusion of choice among brands has coincided with increasingly expensive grocery bills.

“You might think you’re a savvy shopper, supporting independent businesses when you buy a product from the organic foods aisle of your grocery store, but chances are you’re really being duped by a small handful of grocery industry Goliaths hiding behind an array of brands and pretty packaging,” said Wenonah Hauter, executive director of Food & Water Watch.“The largest mega-retailers and manufacturers control more of what we eat than you thought. And they’re not only costing shoppers, but farmers and small food companies too.”

Report findings came from the latest available grocery industry data (primarily from 2011 and 2012) and accounts for mergers, acquisitions and spin-offs through October 2013. Highlights include:

Intense consolidation throughout the grocery industry limits not just where consumers can shop, but what they can buy, according to Food & Water Watch. The number of mergers and acquisitions has increased as the economy emerges from the recession. The report contends the growing and significant consolidation puts small competitors at a disadvantage and denies shoppers transparency and consumer choice.

The analysis points to the ripple effects of grocery consolidation across the food chain. While grocery prices are rising and the share farmers receive is decreasing, the profits of major food retail companies and food manufacturers remain strong.

“This isn’t a problem we can just shop our way out of. These mega-mergers encompass so much of the food chain that it’s extremely difficult to always know who produced what we buy and where our dollars are going,” Hauter said. “People are fed up with not having real choice and transparency when they are trying to feed themselves and their families. It’s time for the FTC to prioritize protecting shoppers over protecting the profits of a shrinking handful of corporations.”

The analysis of grocery industry data builds upon Hauter’s book, Foodopoly: The Future of Food and Farming in America, which examines big business of the food supply and the increasing amount of control monolithic food companies have over consumers and small food producers.