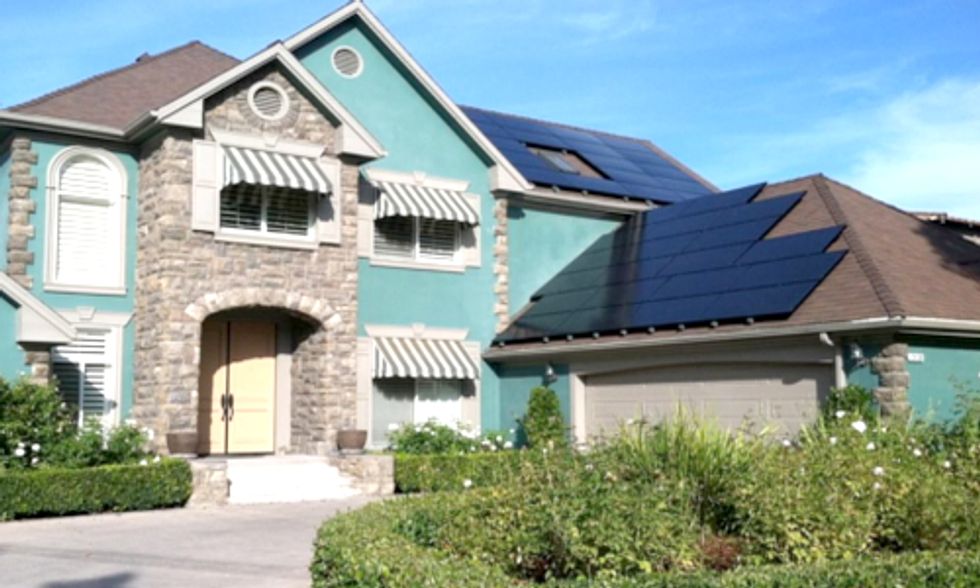 If you lease solar panels in Arizona—now home of the world's largest photovoltaic solar facility—there could soon be a tax for that.

A new interpretation of state law regarding solar panels means that customers could be paying taxes on them by October 2015, the Arizona Republic reported.

The taxes aren't light either. According to the report, a $34,000, 7.8-kilowatt residential solar array would cost about $152 in property taxes for the lessee in year one. Commercial systems at 250 kilowatts might cost a business owner $4,485 in property taxes.

Prior to the new interpretation, homeowners who lease panels saved an average of $60 to $120 per year.

Companies are fighting a new property tax that could cost some homeowners an additional $152 in year one of a lease. Photo credit: Sunrun/Twitter

Solar companies in the area said this tax won't be imposed on them or their customers without a fight.

"We won't let our existing customers pay for this and will fight this all the way to court if we have to," said Will Craven, senior public-affairs manager for SolarCity. "That is a serious hit to many Arizonans' ability to save by going solar."

Many are already speculating that Arizona Public Service Co. (APS) is working overtime to push for the property tax. Last year, the utility settled for the ability to impose a $4.90 fee on solar customers, following the Arizona Corporation Commission’s 3-to-2 vote. The company previously wanted $50 per month.

According to the Republic, APS initially said it was neutral on the property tax, but has since written a letter to utility regulators charging that companies like Sunrun ought to be paying taxes on the distributed generation that provides services to residents, schools, governmental agencies and more. Sunrun and SolarCity officials told the publication that their leases are written in a fashion that allows them to pass tax liabilities on to the customer. Both companies say they don't want to do that.

Officials from SolarCity and Sunrun said their leases are written in a manner that passes any tax liability on to the customer, so even though the Revenue Department sent tax notices to the solar companies, they can pass the costs to customers. But that is not something the solar companies want to do.

Sean Laux, the legislative liaison for the state's department of revenue, said he expects to receive reports from solar companies on the value of their leased properties by May. Laux said things could change, but hinted that it's not expected.

"We believe the DOR interpretation is flawed legally and factually," Craven said. "We expect them to modify their interpretation before they end up taxing thousands of Arizonans."