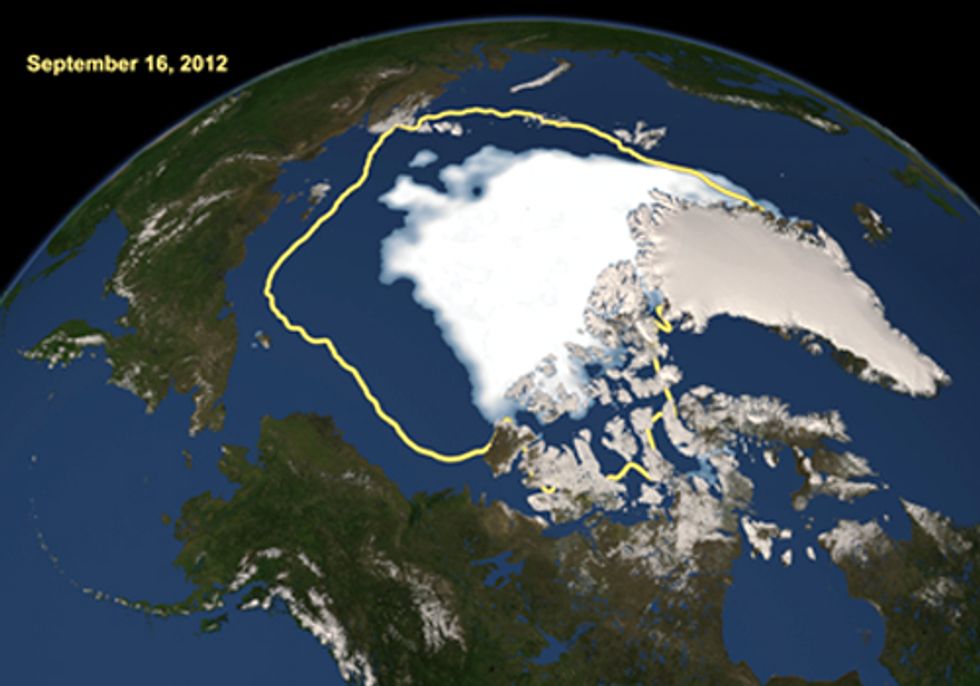 The frozen cap of the Arctic Ocean broke a new record low when it reached its annual summertime minimum extent. Image credit: NASA

As the East Coast begins efforts to recover from Hurricane Sandy, the devastating effects of climate change are impossible to miss. Bigger, more powerful storms. More rainfall and higher storm surge. These are exactly the sorts of impacts that climate scientists have been worried about for years. Global warming is putting hurricanes on steroids and we’re beginning to see the effects.

To make matters worse, record-low sea ice in the Arctic likely contributed to the weather conditions that transformed Hurricane Sandy into a “superstorm,” when she collided with a winter storm system.

Further north, polar bears’ summer ice melted more than ever before this year, and scientists are telling us that the ice-free waters in the Arctic are likely one of the conditions that helped turn Hurricane Sandy into a superstorm.

This loss of ice that is changing our weather also harms vulnerable polar bears–including the mother bears and their cubs in the Hudson Bay that grow dangerously thin while waiting for the ice to refreeze so they can hunt for food after longer ice-free periods in the summer and fall.

Record loss of Arctic ice can also mean longer swims for polar bears looking for ice–but the increasingly ferocious severe storms that we just witnessed are also becoming more likely in Arctic seas–where they can overwhelm polar bears swimming across waters whose sea ice has melted.

The extreme loss of sea ice this summer and hurricane Sandy are what happens when we put the climate on steroids.

Yet Big Polluters are continuing to fund and promote deception around climate science–even in the aftermath of the storm.

Now is the time for us to boost our efforts to spread the word about the importance of climate change and clean energy in this election.

Check out this video from 2008 released on the third anniversary of Hurricane Katrina where Dr. Amanda Staudt, climate scientist for the National Wildlife Federation, looks at the latest scientific research on hurricanes. Clearly her warning wasn't taken seriously.