How a Glass Orb Could Change Solar Energy 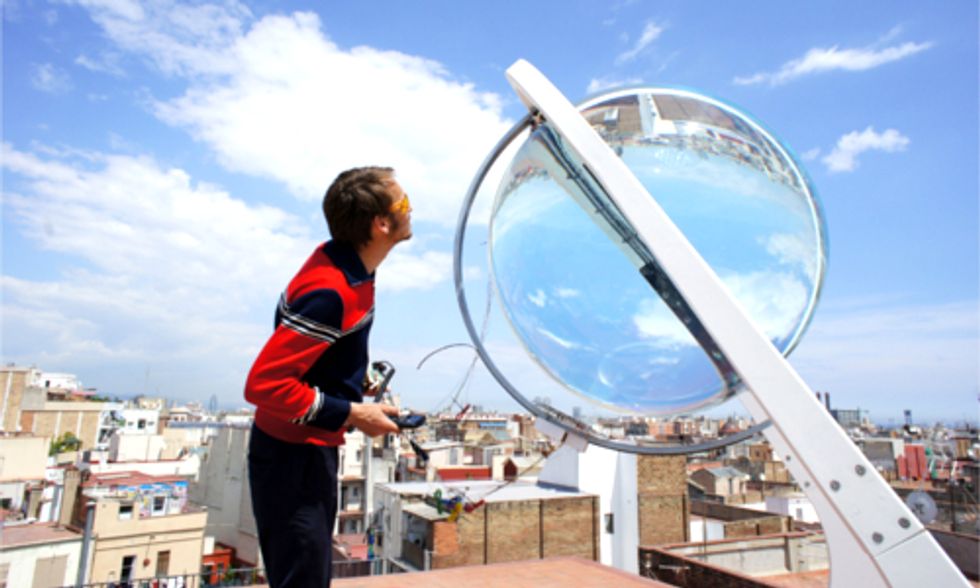 André Broessel’s latest invention looks like something out of a superhero movie. The bifrost device depicted in Thor, perhaps, or Eric Selvig’s wormhole machine in The Avengers.

In reality, though, it’s a stand-alone solar energy generator. And if nothing else, it’s much more interesting to look at than your standard photovoltaic solar panel.

But Broessel’s invention may be more than just aesthetically pleasing. According to a recent report in Fast Company, the German architect touts his orb-like system as being 35 percent more efficient than a standard panel, doing even better when combined with a tool for tracking the sun.

“For the last 40 years we have tried to capture this energy with PV panels,” Broessel says in a video for his company, Rawlemon. “But the earth is moving around the sun, and the fixed panel is losing its efficiency.”

The rotating glass orb, he says, brings in energy from the sun and concentrates it onto a small surface of tiny solar panels. The ball lens is able to concentrate and diffuse light on one small focal point, making it more sustainable (less material used to create solar cells, most of which are made from crystalline silicon) and more efficient. Additionally, Broessel says poor weather would not impact the device because of a built-in weather tracking system.

“We can squeeze more juice out of the sun,” Broessel said.

In terms of whether the device will actually bring meaningful improvements to the renewable energy sector to reduce the effects of man-made climate change, the outlook seems promising on its face. The amount of energy solar panels can derive from the sun is low compared to the energy that the sun can actually produce — some only convert about 20 percent of their available energy into electrical power — so a device that can better concentrate the sun’s energy would be surely welcome. And, as Stanford University’s associate director on energy and sustainable development Mark Thurber told the Wall Street Journal back in April, “the most intriguing renewable energy technologies are those that have the most room to improve.” In terms of solar, he said at the time, “perhaps concentrating solar power can make significant strides as we learn from the first large installations.”

Broessel’s device is not yet available in the market. He is raising money for further testing and for patent applications he’s filed in five jurisdictions.