How a Fracking Company Tried to Buy Pennsylvania Residents' Approval For $50,000 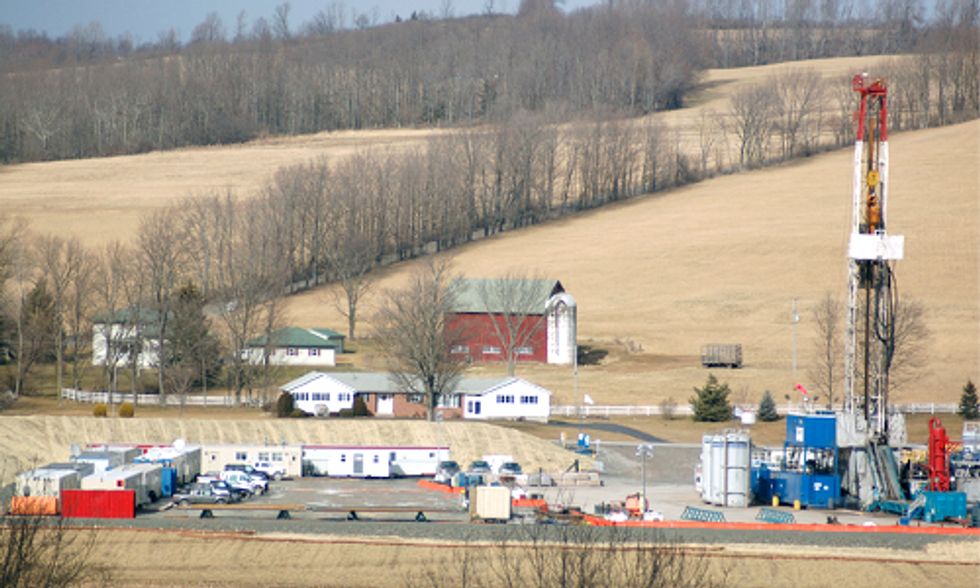 The health risks of living near a fracking site aren't lost on energy companies who participate in the practice, and neither is the pushback from nearby residents. Still, the earning potential is far too enticing for companies to cave in.

That might be why EQT Corp. attempted to buy approval from the residents of Finleyville, a small town near Pittsburgh where the company is increasing its hold by drilling nearly a dozen new wells. According to an investigation by ProPublica,  the company offered $50,000 in cash to residents on Cardox Road if they absolved of EQT of legal liability for health issues, property damage and the impacts from noise, dust, light, smoke, odors, fumes, soot, air pollution and vibrations.

"I was insulted," Gary Baumgardner, a resident who was offered the money in January, told the nonprofit news organizaiton. "We're being pushed out of our home and they want to insult us with this offer."

Would you absolve a fracking firm of liability for health issues you might experience? That's what some residents did in a small Pennsylvania town. Photo credit: Bob Nilsson

Baumgardner doesn't bother hanging up pictures because of the vibrations. He described his home near EQT's operations as "often not livable." He had air quality monitors installed in his home, and sometimes they flashed bright red. His pregnant daughter eventually received an advisory from her doctor not to live near a fracking site. When Baumgardner complained to EQT, he received "constant dismissals, excuses, delays and broken promises," he said.

EQT's offer is not unlike the nuisance easements offered to residents near airports, landfills and even wind farms. However, Pennsylvania gas lease attorney Doug Clark says such an offer is rare in the oil and gas sector. Clark finds EQT's conditions to be rare, too. For $50,000, the company also wanted liability protection for things it might do in the future, including constructing pipelines, power lines, roads, tanks, ponds, pits, compressor stations, houses and buildings.

"The release is so incredibly broad and such a laundry list," Clark said. "You're releasing for everything including activity that hasn't even occurred yet. It's crazy."

An EQT spokeswoman declined to discuss specifics, but believed that "approximately 85 percent of the residents" that of the property owners who were approached signed their agreements. An early version of the agreement required 30 property owners to sign before cash would be distributed. The company changed that requirement after experiencing resistance.

Clark doesn't expect many companies to make similar offers because it might tip residents off to the potential harm of their operations. Still, not every Finleyville resident reported a bad experience.

"I cannot complain about the drilling to this point," said Muriel Spencer, a resident who lives about 500 feet from the site.

Spencer was able to negotiate a five-year term on EQT's liability instead of agreeing to the original, indefinite terms.

"[EQT] has been nothing but fair with me," she said.