House of the Future Is Here Today, Generates Twice the Energy It Uses 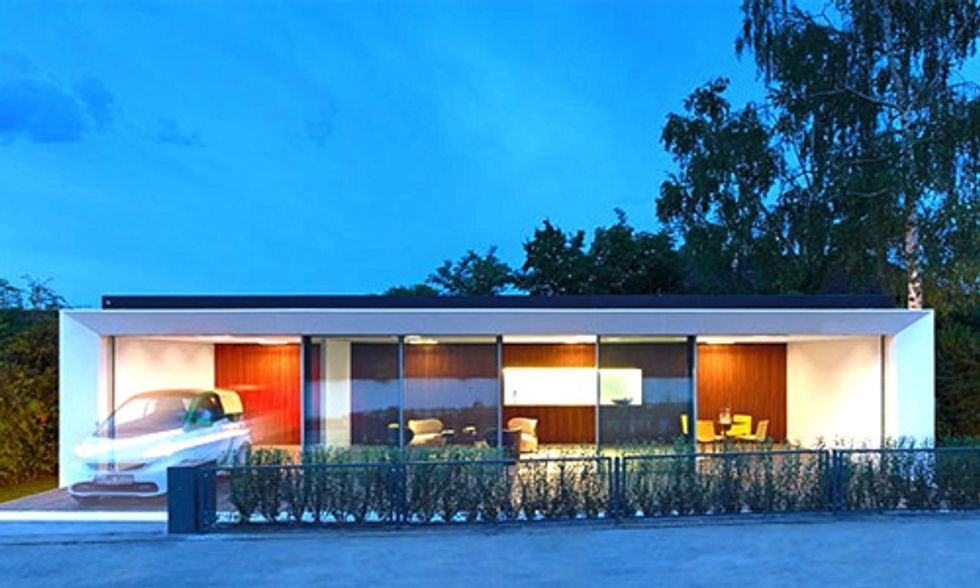 Buildings can suck up a lot of energy. Etimates say that the nation's 114 million households and 4.7 million commercial buildings account for nearly 40 percent of total U.S. energy use, as well as 38 percent of U.S. carbon dioxide emissions.

In order to slash our reliance on natural resources, it's increasingly clear that green buildings are one of the ways forward, and the Active House B10 is a great contender for a more sustainable future.

The Active House is so energy efficient, it can power electric cars as well as its neighbor. Photo Credit: Zooey Braun

According to its project description, the Active House generates twice the amount of energy it needs thanks to the photovoltaic panels on the roof, and does not produce any emissions.

The 970-square-foot house, completed last July, uses smart-grid technology and is so energy efficient it also powers a pair of electric cars as well as a building in the neighboring Weissenhof Museum.

Additionally, since it's a prefab, it only takes a single day to assemble it once it's on-site. It can be also reconstructed in a completely different location or be fully recycled, the designers say.

The extremely light-weight prefab can be assembled on-site in one day. Photo Credit: Zooey Braun

The Active House has a number of other sustainable design elements. As Dwell observed, the home's opaque walls and vacuum-insulated glass front creates a tight seal (which reduces the amount of air that leaks in and out of the home, cutting heating and cooling costs). The fold-up patio also creates another shield from the sun:

The Active House is also a smart home that uses a "self-learning building control system" via radio sensors in and out of the building. This means after a family lives in it for some time, the home will know how to adjust to the temperature preferences and power needs of the dwellers inside. For example, if it's hot outside, the home knows how to stop heating the home.

Appropriately, the conceptual home is located in Bruckmannweg 10 in Stuttgart, Germany, the site of the then-revolutionary Weissenhof Estate that was built in 1927 to showcase how people could live in the future. The former estate was partially destroyed after World War II and the land was unused until construction of the Active House kicked off in 2013.

In the video below, Active House architect Dr. Werner Sobek talks about the necessity of sustainable building and sheds light on the future of construction.

"What we build must be fantastically beautiful, exciting, fun," Sobek said. But it also must "[minimize] the use of resources [and increase] recyclability and energy efficiency, or we won't solve the environmental or population explosion problem."