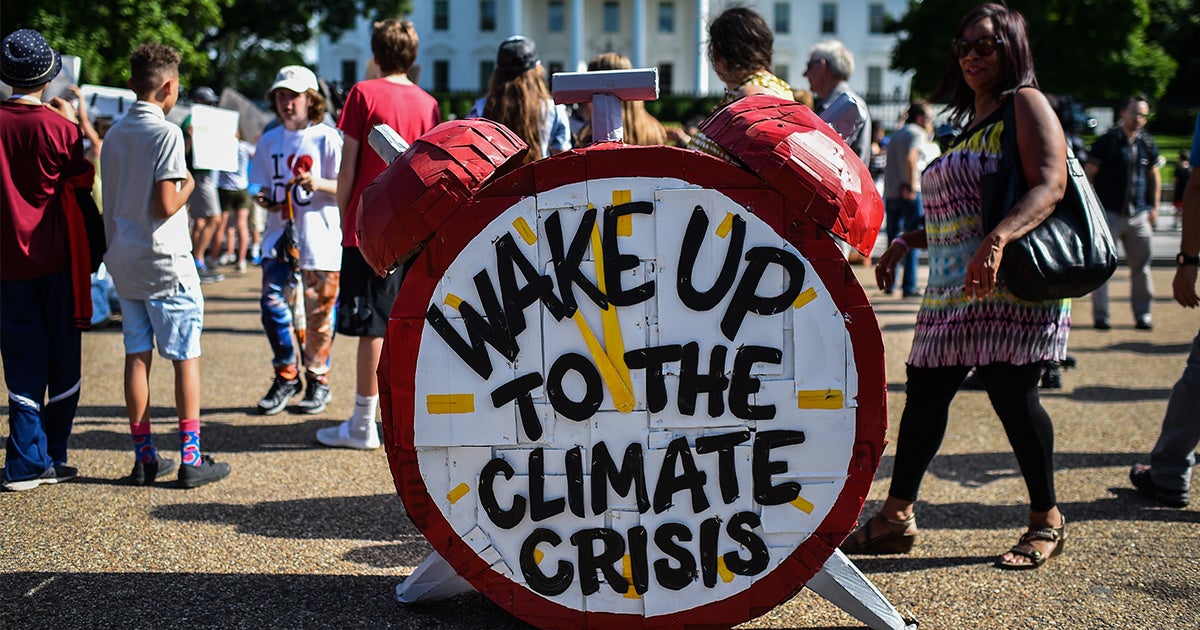 A protest against Trump's decision to withdraw from the Paris agreement, announced in 2017. Salwan Georges / The Washington Post via Getty Images

The U.S. House of Representatives approved its first major climate change legislation in a decade on Thursday, Reuters reported. The Climate Action Now Act would require President Donald Trump to keep the U.S. in the Paris agreement, mandating that he outlines steps to reduce greenhouse emissions and prohibiting him from using federal funds to withdraw from the agreement.

The bill passed 231 to 190, with three Republicans crossing the aisle to approve it with the Democrats. It is unlikely to pass the Senate, but the Democrats see it as a way to stake out a climate position ahead of the 2020 election and to signal to the international community that a future Democratic president would stay in the agreement, The Washington Post reported.

“Passing this bill is an important signal to our allies, and my expectation is that when we act, we’ll see increased ambition from them, too,” Democratic Florida Representative Kathy Castor, who sponsored the legislation and chairs the House Select Committee on the Climate Crisis, told the press before the vote, as The Washington Post reported.

While Trump promised to withdraw from the Paris accord in June 2017, he cannot legally do so until November 2020.

Senate Majority Leader Mitch McConnell said the bill would “go nowhere” in the Senate and called it a “futile gesture to handcuff the U.S. economy,” The New York Times reported.

In debating the measure, House Republicans focused on the Paris agreement’s impact on the U.S. economy and either avoided discussions of the science of climate change itself or acknowledged it as an issue worth confronting. Instead of denying science, they argued that other countries in the agreement, particularly China and India, had not pledged enough.

The Obama administration had promised to reduce greenhouse gas emissions to 28 percent of 2005 levels by 2025; China promised to slow its emissions growth and reach peak carbon in 2030, and India said it would reduce the carbon dioxide emitted per unit of gross domestic product while still allowing overall emissions to rise.

In the debate ahead of the vote, Texas Republican Representative Jodey Arrington called the deal “a gift to our enemies” and Louisiana Republican Steve Scalise said it would send jobs to China and India. However, not all Republicans portrayed climate action as a threat to the U.S. economy.

“Environmental protection and economic growth are not mutually exclusive,” Florida Republican Representative Vern Buchanan, one of three Republicans who voted for the act, said, as The Washington Post reported.

Scientists have said that if all the world’s countries met their pledges under the Paris agreement, it would not be enough to prevent a dangerous rise in temperature, The New York Times reported.

Democratic Representative Alexandria Ocasio-Cortez, who has championed a more ambitious Green New Deal that would transition the U.S. to net zero emissions within 10 years, said Thursday’s act needed to be the precursor to more legislation.

“The idea that we can just reintroduce 2009 policies is not reflective of action that is necessary for now in the world of today,” she said.

2009 was the last year that the House passed major climate change legislation, according to The New York Times. That bill would have put a cap on U.S. emissions and let businesses and utilities trade permits to emit, but it failed to advance in the Senate.