The Last Four Years Were Likely the Hottest on Record 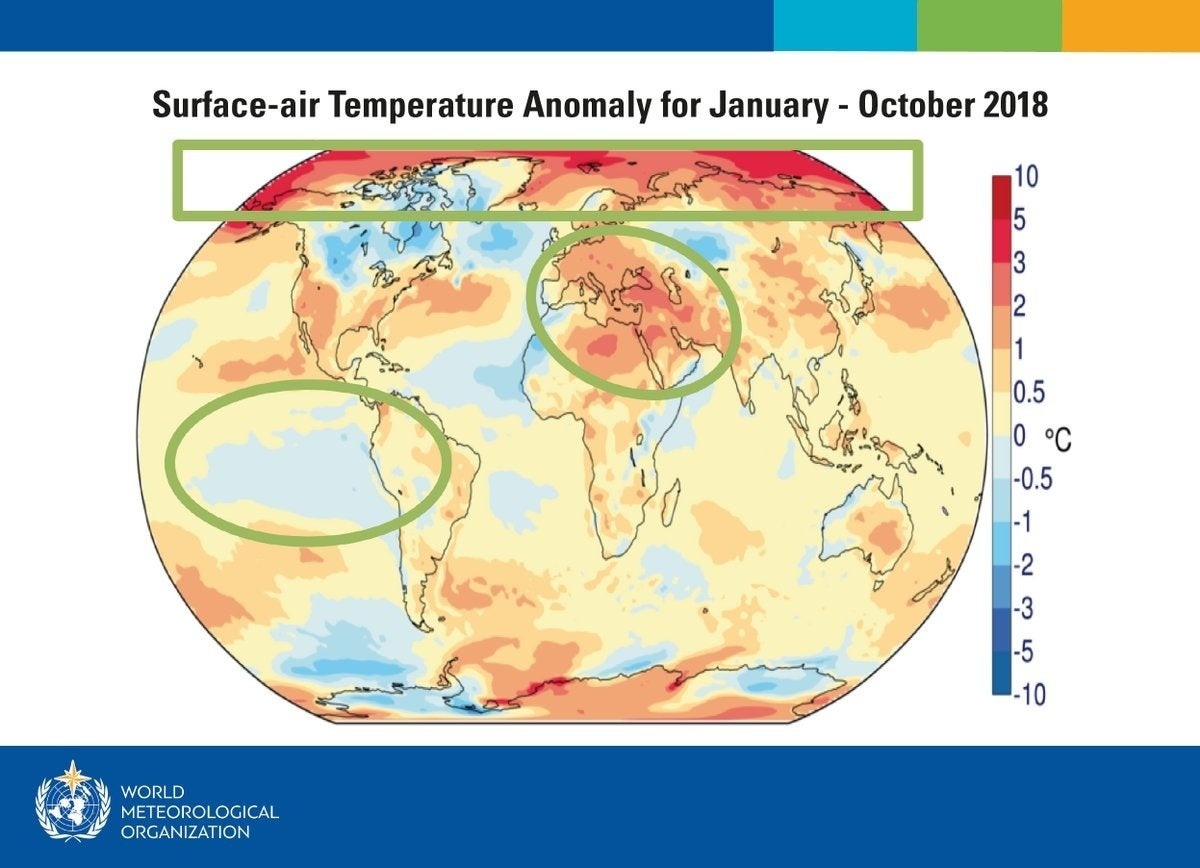 2018 is set to be the fourth warmest year on record. @WMO / Twitter

2018 will likely be the fourth hottest year on record, according to the United Nations’ authoritative voice for weather and climate. The three years that were warmer? 2016, 2015 and 2017.

Furthermore, the 20 warmest years on record have been in the past 22 years, the World Meteorological Organization (WMO) said Thursday in its 2018 State of the Climate report.

Long-term #climatechange continued in 2018. Average global temperature set to be 4th highest on record, nearly 1°C above pre-industrial era. 20 warmest years on record have been in the past 22 years, with the top 4 in the past 4 years: new WMO #StateofClimate report #COP24 pic.twitter.com/yiNz1yjzUI

Unfortunately, the current pace of international government action is “insufficient” to limit warming, the UN Environment Programme warned yesterday in its 2018 Emissions Gap Report. In fact, the annual assessment found that after a three-year decline, heat-trapping greenhouse gas emissions actually increased to “historic levels” of 53.5 billion tonnes in 2017, with no signs of peaking.

“We are not on track to meet climate change targets and rein in temperature increases,” WMO Secretary-General Petteri Taalas said today in a press release. “Greenhouse gas concentrations are once again at record levels and if the current trend continues we may see temperature increases 3-5°C by the end of the century.”

“It is worth repeating once again that we are the first generation to fully understand climate change and the last generation to be able to do something about it,” he said.

Scientists have already warned that 2019 could be an unusually warm year due to a forecasted El Niño, which could cause extreme weather and temperature spikes.

There is a 75-80 percent chance of an El Niño developing by February. @hausfath @WMO #ClimateAction #COP https://t.co/KReKev0woA

The new State of the Climate report shows that temperatures for the first ten months of 2018 were nearly 1°C above the pre-industrial baseline from 1850-1900.

The WMO report comes just days before the critical climate summit COP24 in Katowice, Poland, where delegates from roughly 200 countries will create a “rulebook” on how to implement the 2015 Paris agreement to avoid disastrous climate change.

The U.S. government released a report that warned climate change could kill thousands of Americans each year and slash the GDP by more than 10 percent by 2100. #SMH https://t.co/Yeik3hE2dn