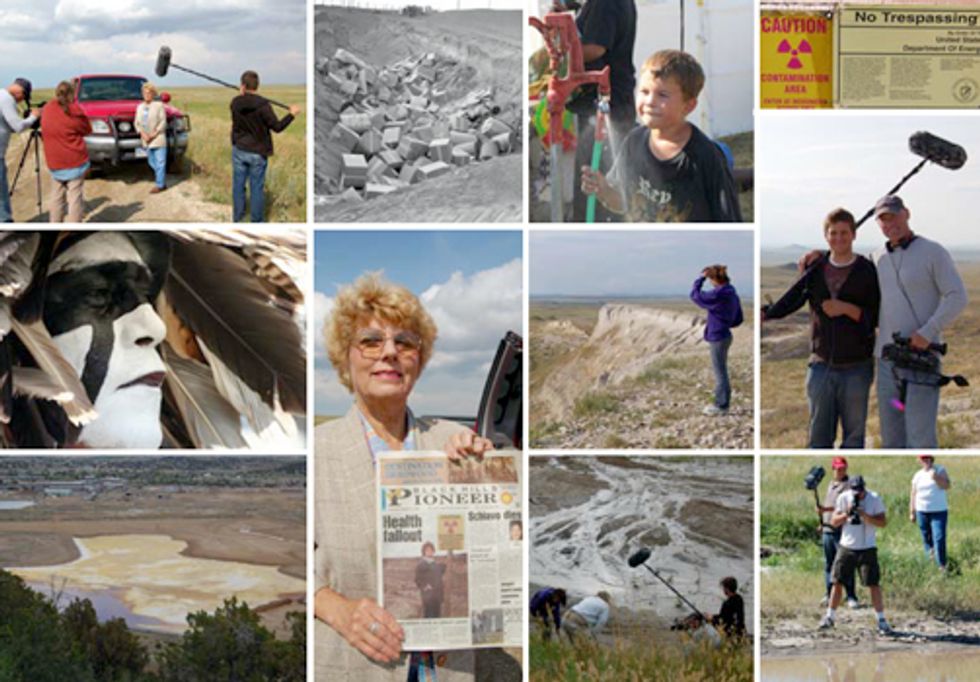 The world premiere of Hot Water, a new documentary exposing the long-term devastation wrought by uranium mining and the nuclear industry, will launch the 21st annual Environmental Film Festival in Washington D.C.

The film follows the investigative journey of Liz Rogers, the “Erin Brockovich of Uranium,” as she travels around the nation examining the legacy of uranium mining, atomic testing and the creeping danger of contaminated waste in the drinking water of 38 million people. Rogers and her production partner, Kevin Flint, examine the health and environmental impacts of the uranium industry and examine the possibility of a Fukushima type disaster along the California coastline. The film premieres on March 12, two years and one day after the Fukushima disaster.

Filmmakers Liz Rogers and Kevin Flint begin in South Dakota witnessing communities overwhelmed by cancer from constant exposure to uranium from local mining interests. They speak with academic experts who pierce through the industry’s false claims of safety. They take samples showing that radioactive material is seeping toward our nation’s breadbasket.

Rogers and Flint follow the story to Oklahoma to explain the economic model of the industry. Private companies mine the uranium for a massive profit. Local workers and residents are made promises, but when finally forced to the admit the environmental and health impact of the mining, the companies take their profits, declare bankruptcy and saddle the American taxpayer with hundreds of billions of dollars in clean-up costs.

The story does not end in the communities where the mining takes place. Thanks to contamination, atomic testing in Nevada and unsafe storage techniques, the drinking water of 38 million people is threatened. For years radioactive material was stored along the banks of the Colorado River. The federal government is working to move the material, but the multibillion dollar project will take decades and no one can tell the extent of the radiation in the soil underneath the piles.

“I don’t know who started calling me the Erin Brockovich of Uranium. Maybe I am the old and fat Erin Brockovich with a trucker mouth,” said Rogers. “I took this journey because I was pissed off. I felt like an idiot because I believed the lies. I believed we were safe. I made this film because people need to know the truth.”

Audiences will learn the undeniable truth that there is no safe level of exposure to the uranium industry. Rogers and Flint speak with academic experts including, biologist Charmaine Whiteface; Dr. Kim Kearfott, nuclear engineer and Professor of Nuclear Engineering at University of Michigan; Dr. Hannan LaGarry, Professor of Geology at Oglala Lakota College; Dr. Jim Stone, Professor of Civil Engineering at the South Dakota School of Mines; as well as former Congressman and leading environmental supporter Dennis Kucinich.

Purchase tickets for the March 12 premiere of Hot Water here.