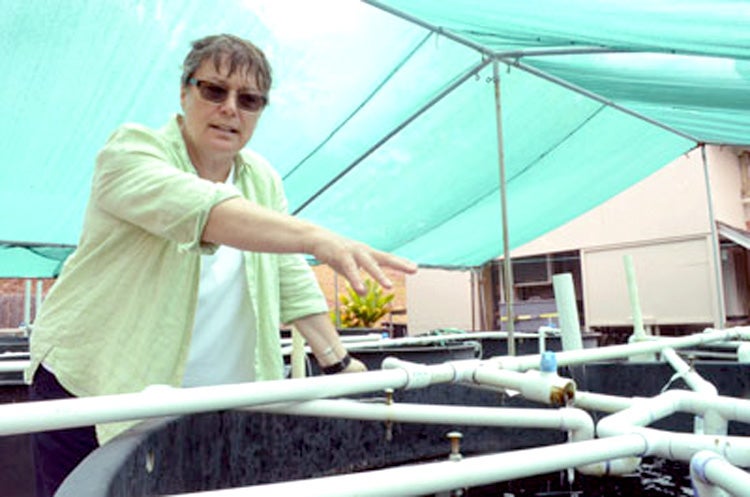 At times, marine biologist Ruth Gates is appalled by the path her research has taken.

“It’s horrifying,” she said recently, sitting in a spartan office at the Hawaii Institute of Marine Science.

Gates, the institute’s director, manages a far-reaching research program to develop novel techniques to prevent climate change from harming the world’s coral. Gates is modifying these wild organisms to thrive in the warmer and more-acidic ocean of the future, rather than trying to protect them by safeguarding their habitats and controlling harvesting. In doing so, she’s moving far beyond the boundaries of traditional conservation. 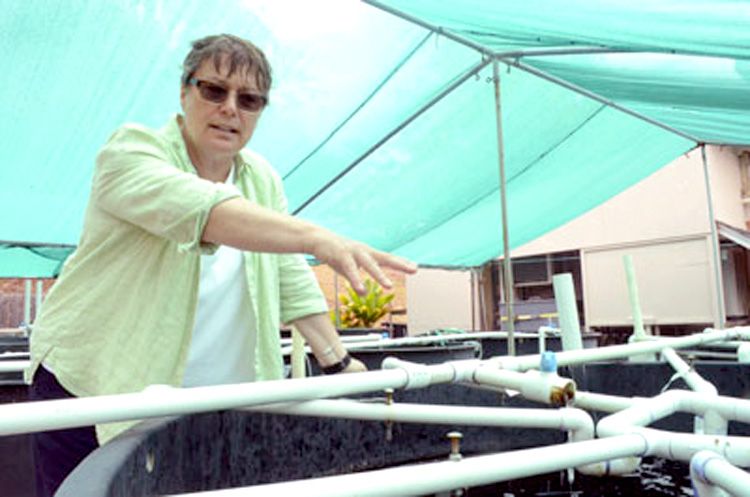 Gates seeks answers to how … and whether… coral reefs can be saved.Photo credit: Daniel Grossman

Gates clearly is uneasy about tinkering with nature in this way. But traditional conservation techniques, such as setting aside reserves, can’t combat climate change.

“Let’s face it,” she said, climate change will “push species to extinction if we do nothing. I can’t stand by and let my system die before my very eyes.”

Coral reefs have suffered overfishing and pollution for as long as numbers of people have lived near them. Now coral also confronts a steadily rising concentration of carbon dioxide in the air, which increases the acidity and temperature of ocean water and raises sea level. It’s an unprecedented combination of adverse conditions.

Concerns of Widespread and Serious Die-Offs

In the past year, the confluence of long-term warming and a strong El Niño have endangered reefs around the world. The National Oceanic and Atmospheric Administration (NOAA) recently reported serious coral die-offs in waters near dozens of countries and archipelagos. Australian scientists have pronounced dead 35 percent of corals on the northern and central sections of the Great Barrier Reef.

Gates’ team, in collaboration with a group under Madeleine van Oppen, a senior research scientist at the Australian Tropical Marine Research Agency, is breeding more resilient coral strains. They’re also testing treatments—such as short blasts of heat—that might toughen up corals and their progeny.

In 2015, the two scientists received a $4 million grant for their work from Paul G. Allen, a co-founder of Microsoft. If the research turns out, whole reefs some day might be populated by organisms bred in her labs, Gates says. Radiators might even apply heat therapy to mile-long stretches of coastal waters.

Gates directs a 25-acre campus on Coconut Island, a verdant reserve, once a playground for the rich and a backdrop that appeared in opening scenes of the TV show “Gilligan’s Island.” In May, I took a power boat the few hundred yards from the mainland. Gates met me brandishing a key ring.

We hopped into a beat-up golf cart and soon pulled up to a dozen fiberglass tanks clustered together like hot tubs in a showroom. She walked onto a wooden deck from which researchers inspect experiments conducted inside. Seawater from offshore is heated and circulated through the tanks. Chunks of coral cut from local reefs soak inside, like pampered spa guests.

Developing Climate-Proof Corals in the Lab

Just as pigeon fanciers create superior birds for homing and tumbling, Gates hopes to develop climate-proof corals. On that day, she was testing three different experimental treatments, each replicated in four separate tanks. After three to six months of conditioning in their warm baths, the corals will grow up in nurseries nearby. Gates says she hopes some of the treated specimens will resist heat and acidity better than untreated varieties. The experiments could show which treatment works best.

Gates also seeks out naturally-hardy corals. Divers off Coconut Island search for the rugged corals of each of the five major species that grow there. Gates breeds the best corals found offshore or created by conditioning, to enhance their heat and acid tolerance. If she can create such organisms for the reefs off Coconut Island, she says, other researchers could do the same thing for threatened reefs all around the world.

But producing super coral differs from traditional breeding in at least one important regard: Coral relies intimately for its survival on a second class of organism.

Corals are soft sack-like polyps that, depending on species, either live alone or in dense colonies, some of which produce reefs cemented together with their own secretions. Vase-shaped polyps feed in part on small prey captured in stinging tentacles that ring their mouths. But the polyps can’t survive solely on food they can ensnare. There aren’t enough victuals in the nutrient-poor waters where they grow.

They require additional energy. Nature has supplied it by arranging a remarkable partnership between the polyps and the algae Symbiodinium, which lives inside polyp cells.

The symbiotic algae serve the polyps sugars and other nutritive compounds made by photosynthesis. The coral, in turn, offer the algae physical protection and scarce nutrients such as sulfur. The prismatic displays corals exhibit are created not by their own tissue but by Symbiodinium’s photosynthetic pigments showing through coral’s transparent cell walls.

But Symbiodinium depart coral cells if they get uncomfortable. When ocean water gets too hot, they flee like residents of a house on fire. Absent their symbiotic guests, coral turns bone white—giving the disorder caused by the loss of the algae its name, bleaching—and, in time, dies of starvation. NOAA reports that warm water this year has bleached coral in more reefs than in any known previous event.

Gates says corals might resist warming better if they host heat-tolerant strains of Symbiodinium. But she says the problem isn’t simply identifying or creating, better algae varieties. Corals must be coaxed into cooperating because they’re very choosy about partners, especially once they’re full grown. Gates is seeking “entrepreneurial” corals willing to host heat-tolerant algae. Alternatively, she says that some manipulation of corals, such as “a slight temperature modification to the little beasties,” might induce them to accept algae they would otherwise reject.

Exciting Some Fellow Scientists, Unsettling Others

Robert Richmond, director of Hawaii’s Kewalo Marine Laboratory and a past president of the International Society for Reef Studies, calls the Coconut Island research “innovative and important.”

In a conversation by Skype, Richmond said that now that scientists have documented threats to coral, they should seek out solutions. To do otherwise, he said, would be akin to a doctor’s telling a patient, “You have liver cancer or kidney cancer and saying ‘Have a nice day.'” Yet he fears adverse consequences of replacing the genetically diverse coral communities with less diverse laboratory varieties.

Could the inevitable cold snap or a pathogen, wipe out reefs too specialized for heat and acid tolerance? “That’s what keeps me up at night,” Richmond said. (Gates responded in an e-mail that she’s aware of this issue. She said that she wants to create climate-proof coral strains that also contain genetic diversity needed to resist other challenges. “We can take lessons from the past to avoid these problems—that is how science advances.”)

Corals are among the most prominent species suffering widely from warming, but they are hardly the only ones. Biologist Thomas Lovejoy, a senior fellow at the United Nations Foundation, said by e-mail that in coming years global warming will raise ethical and logistical challenges for conservation around the world, on land as well as in the ocean. Moving species—either naturally occurring or improved strains—into habitats where they never lived before could become an important conservation tool, he wrote, “but should be approached cautiously.”

A stark delicate branching coral stands upright on a pedestal in Ruth Gates’ office, like a bonsai sculpted of ivory. It’s a stark reminder of the stakes in her quest.

“Can we prevent the catastrophic loss of three-quarters of the world’s reefs?” she asks rhetorically. “I don’t know.”

Those committed to preserving the world’s coral reefs—for economic reasons such as subsistence fishing, for vacation viewing or simply because these habitats are wonders of nature—eagerly await an answer.

The author’s travel to Hawaii was supported by Abby Rockefeller and Lee Halprin, in collaboration with the Pulitzer Center on Crisis Reporting.