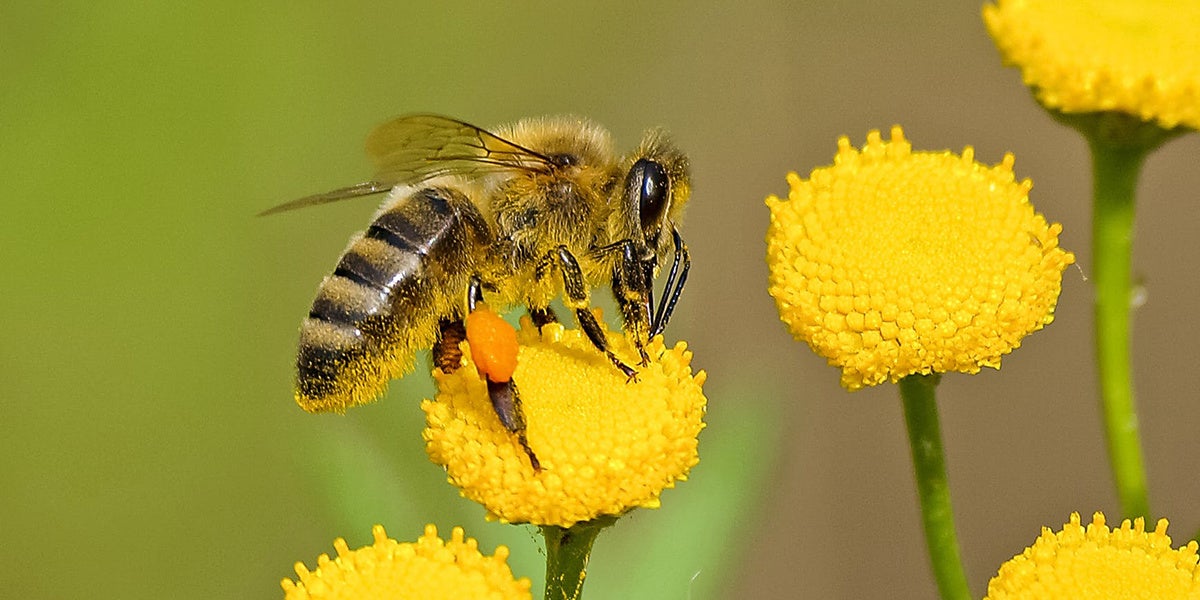 “Save the bees” is a rallying cry we’ve been hearing for years now—one that conjures up images of fuzzy black and yellow honeybees, sipping nectar from colorful flowers or swarming with their bee brethren among tessellated combs while human defenders spread the word about dwindling bee populations. But honeybees are at no risk of dying off. While disease, parasites, and other threats are certainly real problems for beekeepers, the total number of managed honeybees worldwide has risen by 45 percent over the last half century.

“Honeybees are not going to go extinct,” said Scott Black, executive director of the Xerces Society. “We have more honeybee hives than we’ve ever had and that’s simply because we manage honeybees. Conserving honeybees to save pollinators is like conserving chickens to save the birds.”

Contrary to public perception, die-offs in honeybee colonies are an agricultural problem, not a conservation issue. First domesticated about 9,000 years ago, honeybees are not all that different from livestock. They are also not native to the U.S.; they were imported from Europe to help pollinate crops around 1622.

Meanwhile, native bees—of which there are more than 20,000 species varying in size, shape and color—are experiencing incredible losses. Of the nearly 4,000 native bee species in the U.S. alone, four native bumblebee species have declined 96 percent in the last 20 years, and three others are believed to have gone extinct. In the last 100 years, 50 percent of Midwestern native bee species disappeared from their historic ranges.

Scott Black dates widespread confusion about exactly which bees are at risk to around 2006, when the news of commercial honeybee colonies decimated by colony collapse disorder hit fever pitch.

The plight of the honeybees was elevated in the national conversation, but since this was the first time that pollinators had entered the public consciousness (the country’s nosediving monarch populations had not yet made national news), the issue lacked clarity or nuance. At the time, Black recalls well-meaning activists and politicians who were shocked to learn that there were other pollinators besides honeybees.

Juan P. Gonzalez-Varo, a scientist from the University of Cambridge, said that the “lack of distinction” in public understanding between the agricultural problems faced by honeybees and the biodiversity issues related to wild pollinators is also fueled by misguided charity campaigns and media reports. He cites campaigns like Greenpeace’s S.O.S. Bees, which only features honeybees in its visual materials and lumps the issues facing wild bees and honeybees together under the umbrella of ecological conservation.

“They are doing many things right and they are raising awareness,” said Gonzalez-Varo. “The problem is the misconception of the role of managed honeybees in ecosystems.”

The national concern for honeybees led to an explosion in research on honeybee loss and the dangers posed to crops. But comparatively little research has been done to understand wild native pollinator declines. Honeybee research is generally easier than wild bee research, because many wild bees can’t survive outside of the narrow slice of habitat that they’ve adapted to. “You can do many things in research with honeybees because it’s a domesticated animal,” said Gonzalez-Varo. “It’s totally the opposite when you are dealing with wild pollinators, where you have to work with real landscapes and communities.”

The lack of research into wild pollinators is especially problematic considering research that shows managed honeybees can negatively impact native bees. When they are not completing agricultural pollination jobs, commercial beekeepers often keep their honeybees on public land. Honeybees forage year-round, traveling for miles to gather pollen and nectar from wildflowers in areas that native bees rely on for food.

Wild species, which are often solitary and have shorter active seasons, cannot always compete with the sheer number of honeybees in commercial hives, especially in low-rainfall years when wildflowers are scarce. A study of wild bumblebee populations along the California coast, where managed honeybees are critical to pollinating almond orchards, found that an increase in honeybees in a particular area was correlated with a drop in bumblebees.

The problem with spillover goes beyond competition—diseases from commercial hives can be transferred to wild species when the populations feed from the same flowers. As with other intensively farmed animals, overcrowding and homogenous diets have increased the level of pathogens and parasites in managed honeybee colonies. Researchers have found elevated disease rates in wild bees living near greenhouses that use managed bees in Canada, Ireland and England. According to the International Union for Conservation of Nature, the rusty patched bumblebee, which was listed as endangered in early 2017 after declining more than 90 percent over the last decade, may owe that disappearance to diseases spread by commercial bees.

This is bad news for both bees and crops. Even in the presence of honeybees, wild bees play a crucial role in agricultural systems, ensuring stable crop production, boosting yields, and pollinating crops, like tomatoes, that honeybees either avoid for lack of nectar, or have pollen that is difficult for honeybees to reach.

Raising public awareness about the risks that pesticides and loss of habitat pose to bees is a good thing, said Gonzalez-Varo. In the U.S., beekeepers now lose about 40 percent of their colonies each year, and some of that is due to factors that are also a problem to native bees, like pesticides, insecticides, and diseases. But real awareness would recognize that what is good for honeybees is not always good for wild pollinators. “The main change that I would like to see is that beekeeping is truly considered an extractive activity,” he said. “Many other extractive activities are allowed in protected areas like hunting and cattle grazing, but all of them are regulated. Until now, conservationists have been very permissive with beekeepers.”

While honeybees may not be in danger of extinction, their populations are far from robust. According to Nomi Carmona, a national online organizer at the Sierra Club who works with pollinators, honeybee populations may have nominally increased over the years, but those inflated populations are partly the result of controversial practices like hive-splitting, artificially inseminating honeybee queens, and feeding colonies with corn syrup to boost numbers before crops begin to bloom. These practices decrease the genetic diversity in commercially managed hives.

“I think people would be really disturbed to know how honeybees are being treated,” said Carmona. “The situation could certainly benefit from clarification.”

When it comes to differentiating between honeybees and wild bees, some “Save the Bees” campaigns have tried to right earlier wrongs. The Honey Nut Cheerios Bring Back the Bees campaign, came under fire last year for giving away seed packets that could spread non-native plants and displace food sources for wild bee populations. Since then, General Mills has donated to the Xerces Society and University of Minnesota bee scholar, Dr. Marla Spivak, to help research and restore wild pollinator habitat.

“Although the brand’s famous spokesbee, BuzzBee, and his honeybee friends may not be in danger of extinction like some other pollinators, Honey Nut Cheerios is committed to helping all pollinators thrive,” a spokesperson from General Mills wrote in an email to Sierra.

But there is more work to be done. For starters, campaigns to save the bees, whether they are run by international environmental organizations, cereal companies, or government entities, could feature the amazing diversity of bees instead of the pervasive (and often fallacious) honeybee. Gonzalez-Varo lauds campaigns like Toronto’s Pollinator Protection Strategy, which proudly features a metallic green sweat bee (also Toronto’s Official Bee) across its website’s banner.

“As with many other environmental issues,” said Gonzalez-Varo, “education is the key.”