Honey Bees Can’t Practice Social Distancing, So They Stay Healthy in Close Quarters by Working Together 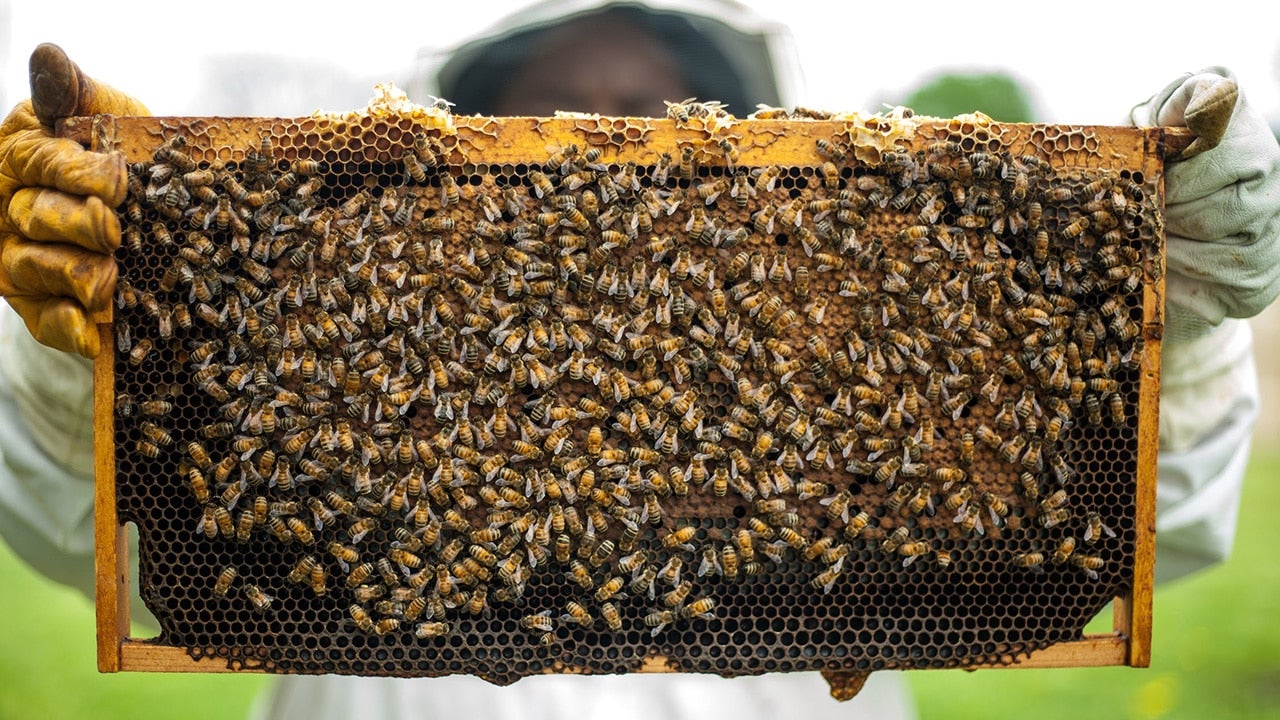 By Rachael Bonoan and Phil Starks

As many states and cities across the U.S. struggle to control COVID-19 transmission, one challenge is curbing the spread among people living in close quarters. Social distancing can be difficult in places such as nursing homes, apartments, college dormitories and migrant worker housing.

As behavioral ecologists who have studied social interactions in honey bees, we see parallels between life in the hive and efforts to manage COVID-19 in densely populated settings. Although honey bees live in conditions that aren’t conducive to social distancing, they have developed unique ways to deal with disease by collectively working to keep the colony healthy.

Life in a Crowd

Honey bees, like humans, are highly social organisms. A honey bee colony is a bustling metropolis made up of of thousands of individuals.

Three “types” of bees share space inside the colony. The queen, who is the only reproductive female, lays eggs. Drones, the male bees, leave the hive to mate with queens from other colonies. Workers – sterile females – make up the bulk of the colony and do all the nonreproductive work. They construct wax comb, collect and bring back food, tend to the young and more.

Members of a colony work so well together that the colony can be referred to as a “superorganism” – a highly connected community that functions like a single being.

Being this social comes with many benefits: Just ask any single parent how helpful it would be right now to live in a community that featured cooperative child care! But it also imposes costs – notably, the spread of disease. Inside the hive, worker bees transfer nectar to each other, essentially swapping the essential ingredient for honey. They crawl on top of each other and bump into others all the time.

What’s more, humans keep many honey bee colonies next to each other for agricultural purposes. This creates unnatural, densely populated “cities” of these superorganisms, where pests and disease can spread rampantly.

Like humans, individual worker bees have immune systems that recognize invading pathogens and fight to get rid of them. However, there are some classes of pathogens that the honey bee immune system does not seem to recognize. Bees thus need a different tactic for fighting them.

For these threats, honey bees defend the colony via social immunity – a cooperative behavioral effort by many bees to protect the colony as a whole. For example, worker bees remove diseased and dead young from the colony, reducing the likelihood of transmitting infections to other bees.

Worker bees also line the hive with an antimicrobial substance called propolis, made from plant resin that they collect and mix with wax and bee enzymes. Applied to hive walls and between cracks, this “bee glue” kills various types of pathogens, including the bacterium that causes a dreaded honey bee disease called American foulbrood.

Another pathogen, the fungus Ascosphaera apis, causes a honey bee disease known as chalkbrood. Because the fungus is heat sensitive, chalkbrood usually does not affect a strong honey bee hive, which maintains its own temperature somewhere between 89.6 degrees F and 96.8 degrees F. But when a colony is small or the outside temperature is cool, as in an early New England spring, chalkbrood can become a problem.

The chalkbrood pathogen affects young honey bees, or larvae, which become infected when they are fed spores from infected food. It lies dormant in the larval gut waiting for the temperature to drop below 86 degrees F. If this happens, the pathogen grows inside the larval stomach and eventually kills the young bee, turning it into a white chalk-like mummy.

When this pathogen is detected, worker bees protect the vulnerable young by contracting their large flight muscles to generate heat. This raises the temperature in the brood comb area of the hive just enough to kill the pathogen. (Honey bees use heat for many reasons: to optimize offspring development, to fight pathogens, and even to “bake” invading hornets.)

In a recent study, we investigated how the efficiency of colony-level fever might change with colony size. At the Starks Lab Apiary, we infected colonies of various sizes with chalkbrood and tracked the response of the colonies with thermal imaging.

Larger colonies successfully generated a colony-level fever to fight the disease. Smaller colonies struggled, but individual bees in the smaller colonies worked harder to raise the temperature than those in the larger colonies. Even if they fail, the bees don’t cave in to fever fatigue by abandoning the fight.

In the Hive, Public Health is for Everyone

Like honey bee colonies in agricultural fields, many humans live in extremely dense conditions, which has been especially problematic during the COVID-19 pandemic. The point of social distancing is to act as if we live in lower densities by wearing masks, keeping at least 6 feet away from others and allowing fewer people in stores.

Data from early in the pandemic show that social distancing was slowing the spread of the virus. But then humans became lockdown-fatigued. By summer, many people were no longer social distancing or wearing masks; on average, individuals were doing less to slow the spread of the virus than in April. The five-day running average of new U.S. cases rose from less than 10,000 in early May to more than 55,000 by late July.

Although honey bees cannot wear masks or socially distance, each individual worker contributes to the public health of the colony. And they all follow the same practices.

They also excel at making group decisions. For example, when it comes time to choose a new home, a worker bee who has checked out a new nest site dances to promote it to other bees. The more suitable the site, the longer and harder she will work to convince the others.

If others express agreement – via dancing, of course – the colony moves to the new nest site. If the bees do not agree, that specific dance stops, that option eventually falls out of favor, and the search continues. In this way, only a group of informed supporters can win the day.

As many commentators have observed, the strong focus on freedom and individualism in American culture has hampered the U.S. response to COVID-19. We see honey bees as a valuable counter-model, and as powerful evidence that social benefits require a community.

Rachael Bonoan is an Assistant Professor at Providence College. Phil Starks is an Associate Professor of Biology at Tufts University.

Rachael Bonoan does not work for, consult, own shares in or receive funding from any company or organization that would benefit from this article, and has disclosed no relevant affiliations beyond their academic appointment.