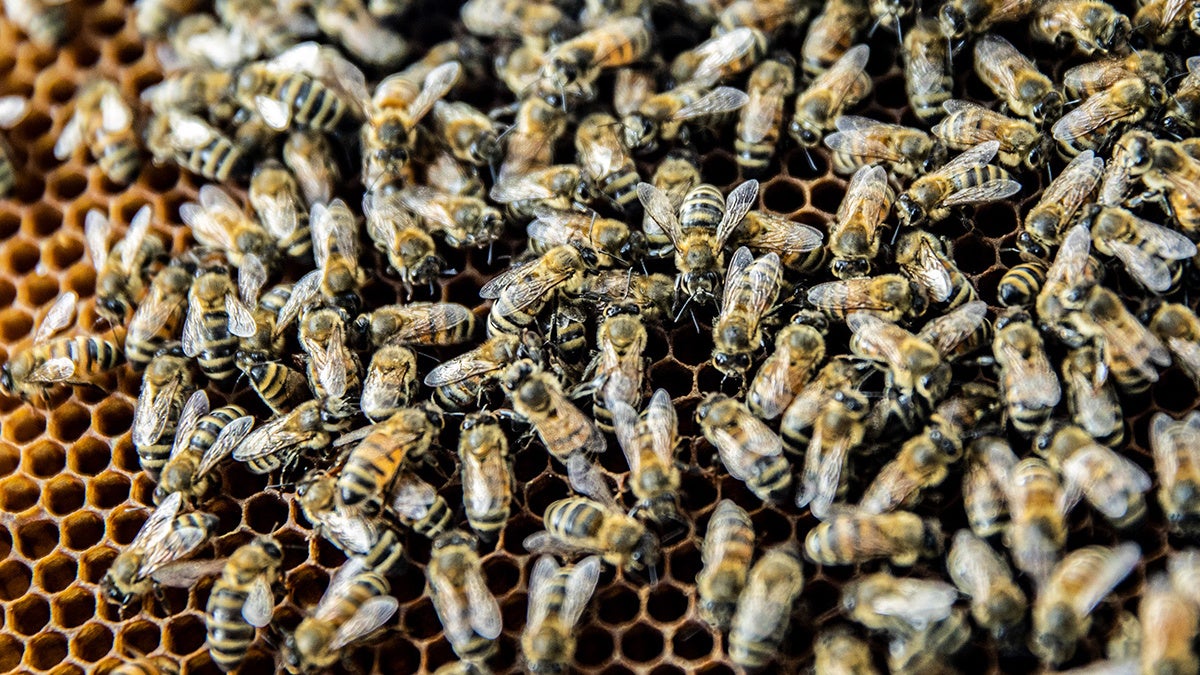 Honey bees touch their mouthparts and antennae together to share food and information, but the practice also can transmit viruses. Fred Zwicky / University of Illinois

Honey bees guarding the entrances to their respective hives are twice as likely to allow access to virus-infected trespassers, suggesting that the pathogen is capable of altering the insect’s behavior and physiology to boost its spread to neighboring colonies.

Israeli acute paralysis virus (IAPV) is a widespread virus that has been linked with colony losses, such as the mysterious outbreak of honey bee Colony Collapse Disorder across the U.S. Publishing their work in Proceedings of the National Academy of Sciences, researchers at the University of Illinois at Urbana-Champaign determined that the virus is capable of changing certain host behaviors and physical traits, particularly in social contexts, of one of the world’s most critical pollinators.

IAPV is considered a “category of concern” and previous research has shown that honey bees infected with the virus are more likely to get lost when returning to their home hives. To determine how the pathogen manipulates host behavior, researchers built on previous work that employed an automated system to study bees’ use of trophallaxis, the regurgitation of food and other liquids to feed colony members.

“Honey bees use trophallaxis to share food with each other as well as hormones and other signaling molecules that can affect their physiology and behavior. They do it in pairs by touching their mouthparts and antennae, and each bee does this with hundreds of partners a day,” said study co-author and entomologist Gene Robinson.

“Trophallaxis is essential to the spread of information and nutrition throughout the hive, but unfortunately, a behavior performed with such close social contact also allows viral infections to be transmitted through a hive.”

Bees were tagged with a barcode for continuous monitoring to determine how IAPV affects the use of trophallaxis. Observations showed that individuals infected with IAPV were just as mobile but engaged less in trophallaxis with home colony members, which protected their hive from viral infection. However, when a honey bee was placed at the entrance of a foreign hive, bees were more likely to engage through trophallaxis with guards – and those guards were then more likely to permit hive entrance to infected bees than healthy ones.

Further analysis determined that the virus also changes the chemistry of hydrocarbons that coat the bees’ exoskeletons – in essence changing how they smell – suggesting that the infected bees may also be “behaving in a way that is meant to appease the guards by engaging more in trophallaxus.”

The findings show that the virus is evolving in ways that enhance its ability to spread, which could be detrimental to honey bee colonies in the long-run. Human-induced environmental changes create conditions that make emerging diseases more likely – a problem that the study authors write is “likely to worsen as humans continue to move domesticated species around the world and adopt increasingly intense management practices.”