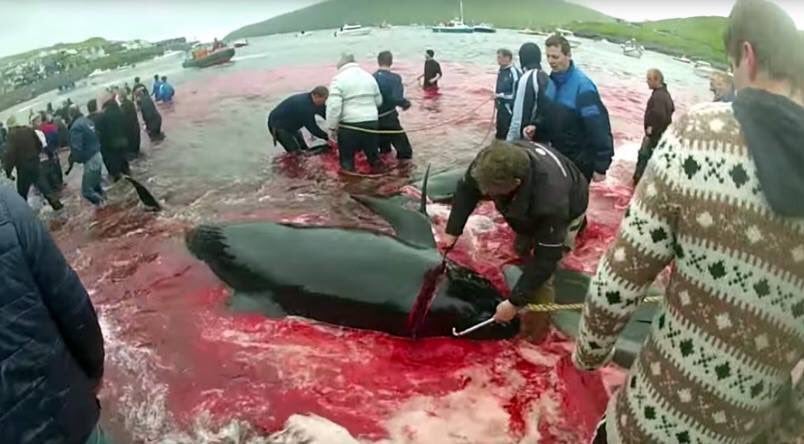 Sea Shepherd Conservation Society is asking big-box retailer Costco to stop its purchase and sale of salmon exported from the Faroe Islands until the Faroes bring the brutal and archaic mass slaughter of pilot whales and other cetaceans, known as the “grindadráp” or “grind,” to a grinding halt.

The letter comes on the heels of last week’s news that a pod of 30-50 pilot whales was slaughtered in the first grindadráp (grind) of the year, on the island of Viðoy in the Danish Faroe Islands archipelago.

The letter to Jelinek expresses concern that chain-store giant Costco is selling salmon farmed in the Faroe Islands, an archipelago of 18 isles in the North Atlantic, where hundreds of wild, migrating cetaceans are slaughtered each year.

Describing this massacre of ocean wildlife, the letter states that “entire pods of pilot whales and dolphins are driven by hunting boats to the shallow waters along the Faroe Islands. … Those cetaceans who are not herded far enough into the shallows will have a gaff hook stabbed into their blowholes and will be pulled ashore the rest of the way by rope. The panicked and thrashing whales or dolphins are then slowly sawed into behind their blowholes with a special Faroese hunting knife and killed by the severing of their spinal cords, as each animal is brutally slaughtered before the eyes of their family members. No member of the pod is spared, not even pregnant females or juveniles.”

Though Faroese whalers claim that the grind brings a quick and humane death, some of these highly intelligent and socially complex marine mammals take as long as four minutes to die, as the steely waters of the Faroes run red with blood.

The letter to Jelinek continues, “As a large and respected member of the corporate retail community, Costco should not condone these acts of brutality by economically supporting the Faroese salmon fishery. Costco can apply economic pressure to end the atrocity known as the “grind,” a whale hunt that should be deemed illegal by the anti-whaling EU but yet is supported by Denmark, a part of the EU. Mr. Jelinek, Costco and you as its CEO, now have the opportunity to show your members and the international community that you represent a company of compassionate individuals who care about the fate of intelligent and sentient whales and dolphins as well as the oceanic eco-systems upon which they—and all life on Earth—depend for survival.”

The grind is an outdated practice as the Faroese people have one of the highest standards of living in all of Europe and access to the same foods found in grocery stores in Denmark. In addition, Faroese health officials have warned against consumption of the pilot whale meat, especially by children and pregnant women or women of childbearing age, because it is contaminated with neurotoxins such as mercury.

Though it is the slaughter of cetaceans by the Faroese that is opposed by Sea Shepherd, the organization is calling for a boycott of salmon exported from the Faroes until the senseless grind is permanently ended.

“These compassionate celebrities have offered their desperately needed voices to the pilot whales who were killed recently in the Faroe Islands and to those who are at risk each time they pass by Faroese shores,” Watson said regarding the Hollywood industry’s support. “We must make it known that the blood of intelligent and social whales and dolphins stains every package of salmon from the Faroes. This archaic massacre of cetaceans, defended by the EU-member nation of Denmark, must be sunk economically. I encourage all concerned consumers to do their part by boycotting salmon from the Faroe Islands at Costco and wherever it is sold.”

The appeal to boycott Costco comes just weeks after Sea Shepherd released a 22-minute documentary short on YouTube shot by McCall, chronicling his experience in the Faroe Islands, along with a companion essay he published in the Huffington Post.

Since 1983, Sea Shepherd has sent 10 campaigns to the Faroes, saving hundreds of whales and dolphins while dealing with the arrest of Sea Shepherd volunteers and the seizure of the organization’s boats.

Faroese law states it is illegal to interrupt the killing and illegal to sight a pod of whales and not report it. To further protect their beloved Grind from outside interference, this year the Faroese enacted laws that prohibit Sea Shepherd crew from entering their waters and wearing Sea Shepherd shirts on land.

With years of footage of this bloodshed, Operation Bloody Fjords will include culling together decades’ worth of photographic and video evidence to target the Grind in legal, political, commercial and economic arenas. A full-length documentary feature will also be produced.